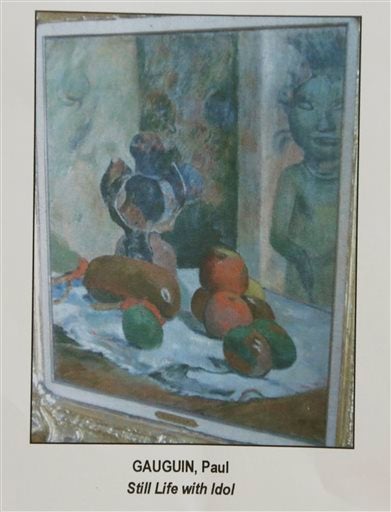 This undated photo released by the Presidential Commission on Good Government shows a painting by Paul Gauguin titled "Still Life with Idol," which is allegedly part of the rare art collections of the late Philippine dictator Ferdinand Marcos. AP

MANILA, Philippines — The Philippine government has seized 15 paintings from the former home of late dictator Ferdinand Marcos, part of efforts to recover 156 artworks — including ones by Van Gogh, Monet and Michelangelo — that are part of his alleged ill-gotten wealth, an official said Wednesday.

The paintings were recovered Tuesday from Marcos’ old residence in San Juan city in metropolitan Manila, said the head of the agency tasked to recover wealth amassed by Marcos during his 20-year rule.

Andres Bautista, chairman of the Presidential Commission on Good Government, said court sheriffs also tried to seize paintings from a condominium belonging to Marcos’ widow, Imelda. He said the sheriffs were kept waiting outside for an hour, and when they entered they saw her crying and found only empty walls and hooks that once held paintings.

Bautista said sheriffs backed by agents of the National Bureau of Investigation also went to Imelda Marcos’ congressional office and to the Marcos family’s ancestral home in northern Ilocos Norte province. He said he is awaiting their reports.

The good government commission obtained an anti-graft court order this week imposing a “writ of attachment” on the 156 paintings in connection with a civil suit seeking to recover the Marcos wealth, which has been estimated to be in the billions of dollars.

Bautista said the seizure of the paintings was necessary before they “disappear or are hidden away.” They were taken to the central bank for safekeeping.

He said his agency will seek help from international auction houses Sotheby’s and Christie’s to determine the paintings’ authenticity.

Bautista said the trial of the civil suit will continue until the court decides who should own the paintings.

“The position of the government is this is part of ill-gotten wealth and should be returned to the government and the people,” he said, citing a Supreme Court decision. The 2003 ruling said the Marcoses’ wealth in excess of their total legal income of around $304,000 from 1965 to 1986 was presumed to be ill-gotten.

Marcos died in exile in Hawaii in 1989 without admitting any wrongdoing during his presidency.

Bautista said earlier this year that Philippine authorities have recovered more than $4 billion of an estimated $5 billion to $10 billion amassed by the Marcoses. That includes $712 million from Marcos’ secret Swiss bank accounts, he said.