Step into the ‘Imaginarium’, a multi-arts festival of the absurd | Lifestyle.INQ ❮ ❯ 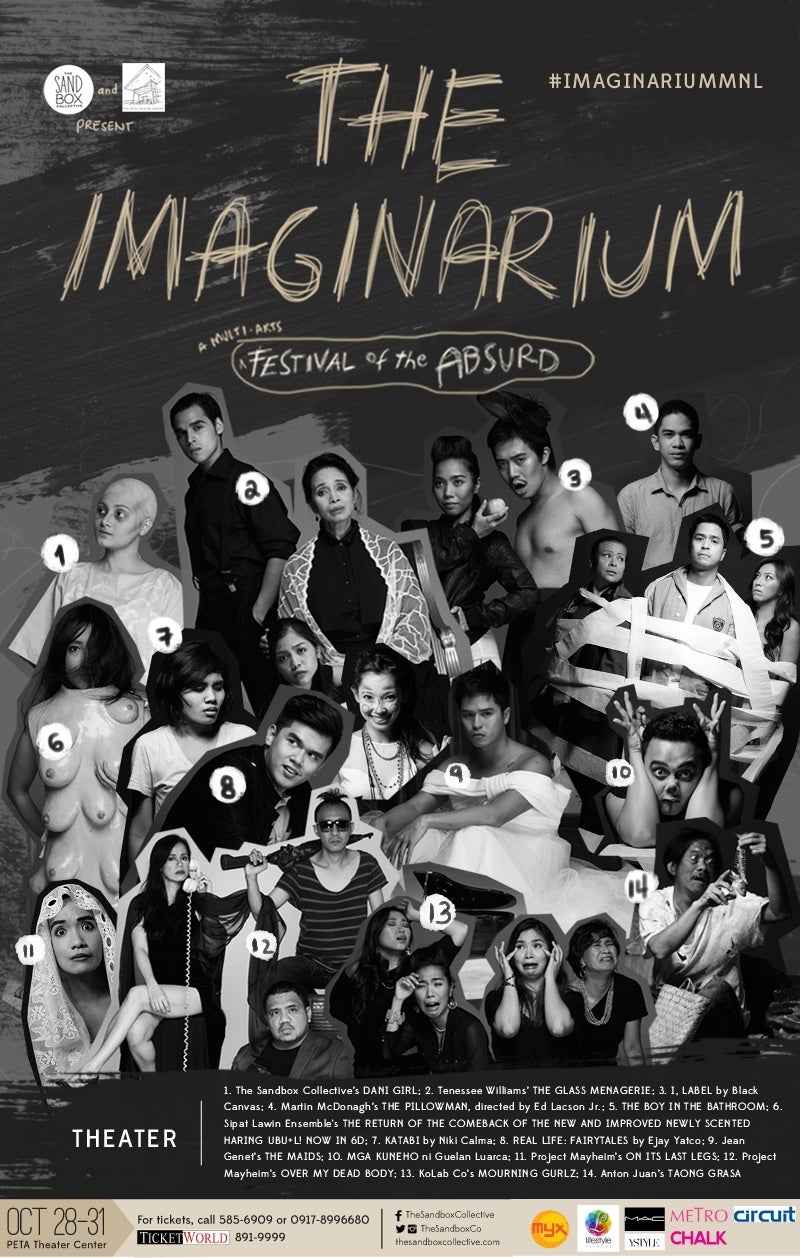 Step into the ‘Imaginarium’, a multi-arts festival of the absurd 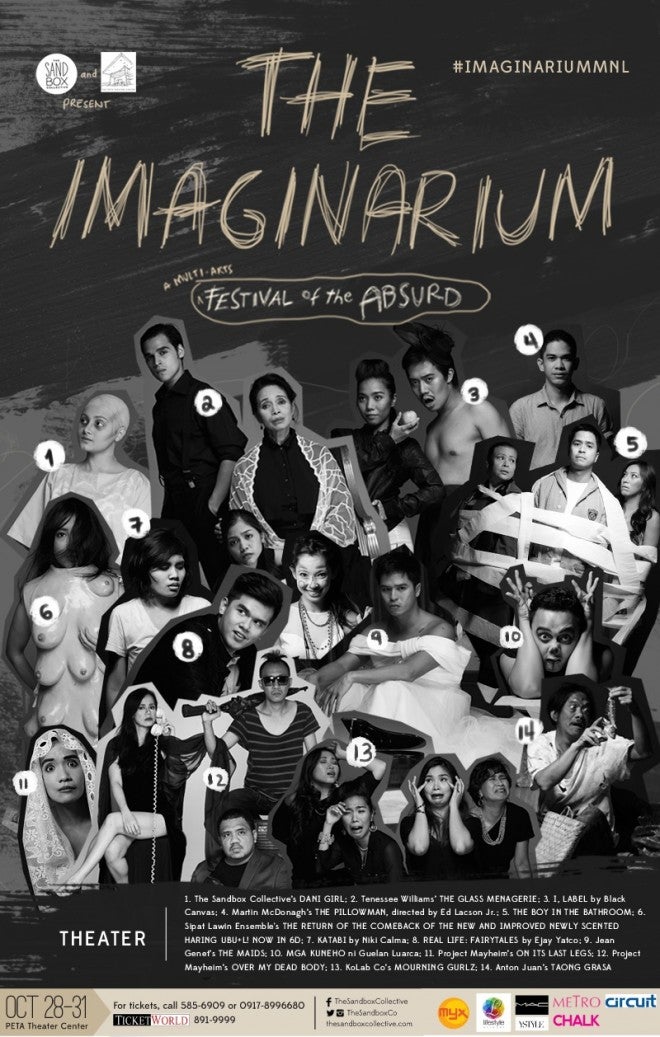 MANILA, Philippines—Social media has been abuzz lately about The Sandbox Collective’s most exciting (and curious) endeavor – “The Imaginarium”, a multi-arts festival of the absurd.

Everyone from philosopher Albert Camus to designer Karl Lagerfeld has been quoted on their philosophies and thoughts on the ‘absurd’ (whether taken at face value or its core essence inspired by the post-World War II French theatrical movement). These were then followed by the hashtag, #ImaginariumMNL.

On September 22 at the Peta Theater Center, the veil has been lifted as Manila’s newest performing arts group, The Sandbox Collective, following the success of its critically acclaimed production of the Off-Broadway musical “Dani Girl,” a musical good for the soul, launches “The Imaginarium, “a multi-arts festival of the absurd.

Running from October 28 to 31 at the Peta Theater Center, the festival will feature performances, presentations, and collaborations of various media, including film, fashion, dance, visual arts, improv, spoken word, music, food and beverage and theater.

With the global movement shifting towards artistic expression and experimentation, “The Imaginarium” comes at an opportune time. Across cultures, there is a growing interest in the unconventional and oftentimes bizarre. In recent years, crowds have flocked towards mercatos, trade fairs, music festivals, specialty stores, and fringe movements – looking for vitality and renewed authenticity of their own lifestyle and experiences.

“We believe the game is changing,” shares The Sandbox Collective’s managing artistic director Toff de Venecia. “There’s a new generation of cultural connoisseur and practitioner who isn’t afraid of stepping outside of the box anymore and being unconventional or different. They’re about celebrating and championing what’s new and creative.”

He shares that The Sandbox Collective’s market, composed of mostly students and young professionals, a.k.a. millennials, are exposed to what’s happening in other parts of the world, primarily because of travel, word-of-mouth, the Internet, and social media. “It’s no longer about being particularistic to the genre,” shares Toff, “but creating an overall experience, a meaningful experience.”

With that, The Sandbox Collective assembled a young team of curators and influencers who, for the past months, have been brimming with energy and excitement in reaching out to their respective markets and solidifying The Imaginarium’s multi-faceted programming.

For dance and physical theater, the group tapped Daloy Dance Company’s PJ Rebullida; for music, critic and music aficionado Ren Aguila; for film, magazine editor Don Jaucian; for visual arts, media practitioner and editor Raymond Ang; and for food and beverage, Edsa Beverage Design Group’s David Ong. “We’re honored to have them join us for the festival,” shares Toff, adding, “They add energy and insight to both the product and the process that help facilitate wonderful experiences for our audience.”

It is this cross-pollination of cultures that The Sandbox Collective, with its multi-disciplinary approach to the performing arts, hopes to foster through “The Imaginarium” – “that we find spaces in which we can work together, instead of separately or against each other, and raise a proverbial middle finger to the establishment.” Toff ends, “It is no longer about exclusivity, rather, inclusivity.”

“The Imaginarium”, a multi-arts festival of the absurd, will cap off The Sandbox Collective’s 2014 season before it returns in 2015. The festival will run for four consecutive days at the Peta Theater Center, No. 5 Eymard Drive, New Manila from October 28-31, 2014. There is a limited amount of tickets being sold for most stages and/or special events so advanced reservation and transaction is encouraged. As with most festivals, the schedule is a proposed estimation and is subject to change within a one to two-hour window.