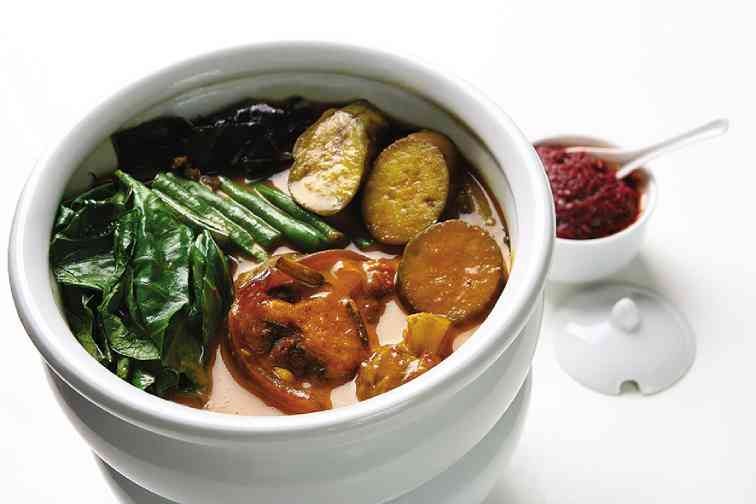 Judging the sinigang (sour soup) entries at the recent National Food Showdown, we looked for the right timpla (taste mix) of sour and salty. We also pierced and shredded the ingredients to determine if they were properly cooked, not under or over, and looked at the outcome to see if all the elements were presented well.

One of the judges was Lita Urbina, founder and CEO of the Café Laguna group in Cebu. She pronounced her rating for each entry according to her taste buds and experience, which has propelled her business to grow from a five-table carinderia (eatery) to several restaurants that now include five franchises outside Cebu.

It was at the franchise resto in Cagayan de Oro where I first tasted Café Laguna’s all-Filipino food. I wondered then why Lita named it such, and only heard the story when we talked about her life and business while waiting for the sinigang entries to cook.

Julita Bocalan Pecaña and her husband, Dr. Ricardo Urbina, were both from Laguna, she from Cabuyao and he from Sta. Cruz. She was secretary to the mayor of Sta. Cruz while he was a military doctor at V. Luna Hospital in Quezon City. When her husband was assigned to Cebu in 1975, she didn’t want to go, but to convince her to try it there, he brought their five children with him.

She felt like a stranger initially, especially since she didn’t know the language. But, eventually, Cebu became home. However, she still keeps her ties to Cabuyao, and her family visits Laguna every Undas (All Saints and Soul’s Days) because her parents are buried there.

Early on, Lita knew she had to augment her husband’s salary since half of it went to pay the rent of their home. There were living expenses plus the children’s schooling (now six, with the youngest born in Cebu). She worked at the Montebello hotel as rooms division manager. Her salary helped, but the family’s growing needs made her think she had to do more.

She resigned after two years, and in 1980 opened a carinderia at the sala of an apartment located near the military camp. She learned to cook from her mother; she recruited her washerwoman and driver as her first staff. With a capital of P300, she started with five tables, which expanded to 10.

She went into catering, renting her plates and flatware from a stall at Carbon market.

She likes to think she introduced Cebuanos to Tagalog cooking, because the bestsellers in her restos are the fresh lumpia, puto bumbong and dinuguan.

After more than 30 years, Lita’s business has grown to three Café Laguna restaurants, a Thai-Vietnamese resto called Lemongrass, and Ulli’s, a place that serves Asian street food. Ulli, by the way, is the name her grandchildren call her.

Will she have a Manila branch? Lita says Manila already has Glenda Barretto, whose Via Mare has been serving great Filipino food.

Four of Lita’s children are working for the Laguna Group, a setup that assures continuity.

Her son, Rachy, worked in a bank for six years and then asked if he could take advance courses at the Culinary Institute of America (CIA). Lita laughed as she recalled asking her son to sign a contract to work with the Laguna Group for five to 10 years, in exchange for the expense of sending him to the CIA.

But Rachy has stayed willingly, and it was he who established the commissary.

Is there a difference in style between the woman who learned through experience and the son who studied the science of culinary management? Lita said there is, especially in food

costing and work organization. But she said they learn from each other and the result is a professional company.

The children started as branch managers but now they are directors, handling the different aspects of the business as defined in the company “constitution”—research and development, marketing, finance and personnel.

It’s always tempting to ask an achiever what’s next, because that kind of energy makes resting on one’s laurels unimaginable. The near future, said Lita, will have the Laguna Group open another restaurant at the South Road Properties, a new business area outside Cebu city proper, sometime in December. She said the menu will be mainly seafood and lechon.

Our talk didn’t really end there. When the sinigang dishes arrived, we assessed each entry, smiling when an entry was good and looking forlorn when another failed. We learned how different pang-asim (souring agents) tasted—sampaloc, batuan, rattan, santol. There were about 15 sinigang in all, quite a number for the two judges, myself and Fil Juntereal.

But for Lita Urbina, it seemed all in a day’s work.