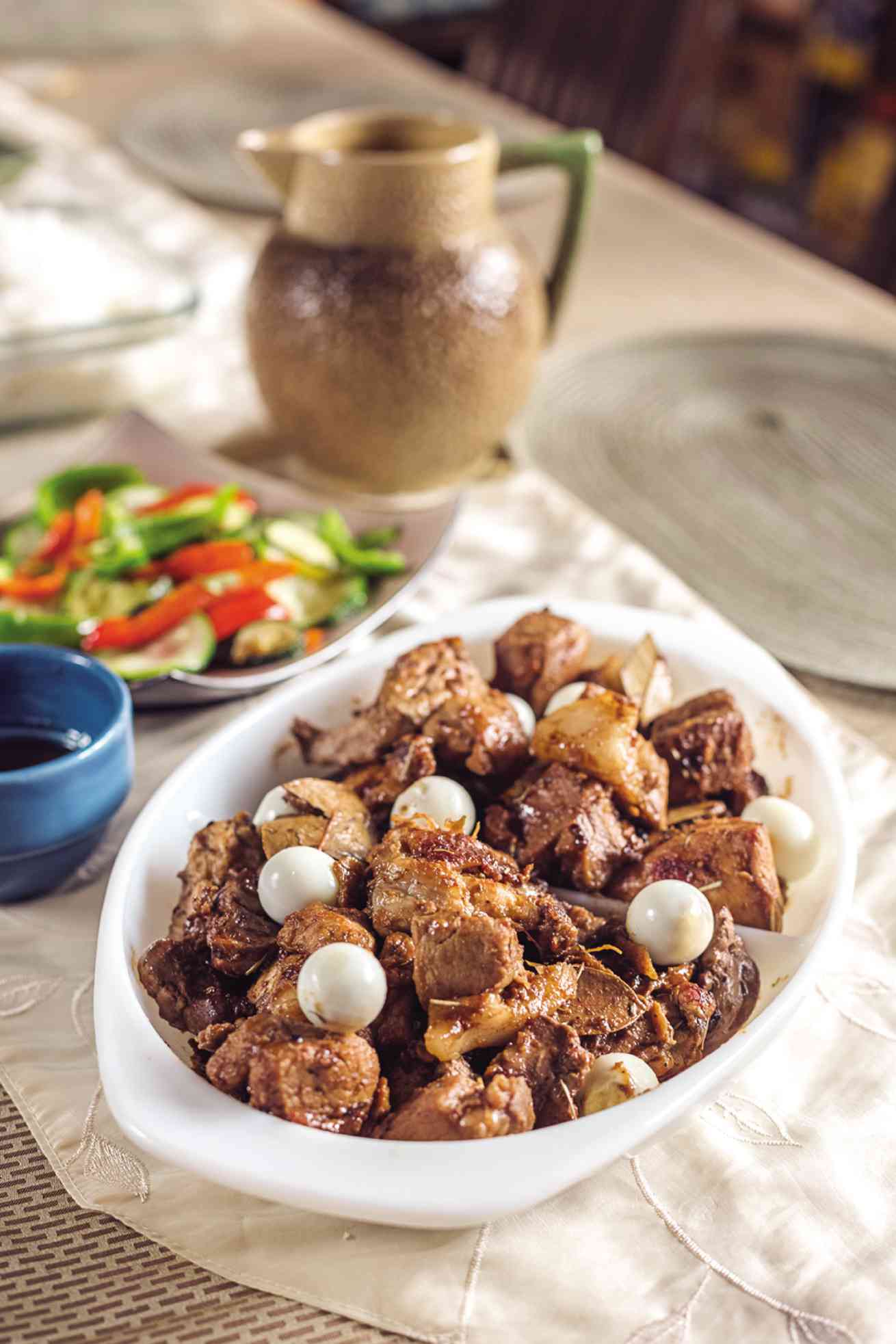 Efi Tabuena Taylor grew up cooking in the kitchen of her grandmother, Nieves Lagdameo Aguilar Tabuena. Her lola, an exceptional cook, patiently taught Taylor the rudiments at a very young age, including going to the wet market in Tagkawayan, Quezon, to look for the freshest ingredients.

At age four, Taylor already knew the many ways of cooking egg—poached, fried, scrambled, omelette, etc. At six, she started cooking creamy chicken pastel. At seven, she could whip up lengua estofado (oxtail tongue stewed in tomato sauce) and was already an expert in cleaning beef tongue.

“My lola would put a bangkito (a low stool) where I could stand near the cooking area; she would leave me in the kitchen to play around and cook,” recalls Taylor.

At 10, she knew how to prepare leg of ham for Christmas.

Most of lola’s heirloom recipes were passed on to her, including the pata beans, callos, roast pork and caldereta, to name a few. Some recipes were even written on index cards. But there’s one special dish that Taylor would always associate with her grandmother’s passion for cooking good food—chicken pork adobo.

“My lola’s adobo was a bit dry with very little sauce in it,” says Taylor. “And we really like it that way.”

Taylor, a Bicolana, would cook her lola’s adobo for her own family, sometimes adding coconut milk with lots of chili to spice up the dish.

Later on, she gave the adobo dish her own twist by adding herbs and spices and trying out different kinds of vinegar to create new dimensions in flavor and taste.

Instead of using regular commercial vinegar, she puts red wine vinegar or white wine vinegar, which gives off a very subtle and lovely relish in the palate. Sometimes she uses balsamic vinegar.

“Red wine vinegar is healthier because it comes from grape juice that’s good for the heart,” says Taylor, who started preparing healthy dishes about 15 years ago.

For extra zest, she marinates the meat in rosemary and thyme. Then she browns the meat before combining it with garlic, oyster sauce, vinegar, salt and pepper. Instead of soy sauce, she uses iodized salt.

“I use only a small amount of soy sauce just to add color,” says Taylor, who’s a staunch advocate of using iodized salt.

She also uses olive oil to fry the meat.

Taylor prefers dry adobo, but can also prepare the dish with lots of sauce for her three children and eight grandchildren.

“They like their adobo swimming in brown sauce so we call it sopas na adobo,” she says. “Sometimes they want to add potato, saging na saba and quail eggs.”

She always pairs her adobo with steamed veggies.

The 54-year-old Taylor and her Australian husband have lately been into healthy eating, mostly preparing food with olive oil and lots of mixed vegetables and fruits.

“My husband is not into rice, so he pairs his food only with veggies,” she adds.

When not cooking, Taylor is busy running her marble finishing business.

She’s also active in Kiwanis. She’s a former president of Kiwanis Club of Manila and is now lieutenant governor-elect of division 3-A. Her group regularly conducts feeding programs among less fortunate children, and Taylor is tasked to prepare lutong-bahay, or home-cooked food.

“Never congee,” says Taylor. “To help people, you don’t have to be rich. Helping should come from the heart, and you give your all.”

She cooks three kinds of meat, plus veggies and noodles like pancit guisado. She also caters whenever there are big occasions in her group. Sometimes her friends would ask her to cook for their parties as well.

Taylor used to run a small canteen in front of her house in Quezon City, but gave it up eventually.

Even now that her children already have their own families and she lives with her husband and a housemaid, Taylor still cooks like she’s having a big party at home.

“That’s the Bicolana in me,” she says. “We are used to cooking in big volumes, so that when you come to our house, there will always be food on the table.”

In a mixing bowl, combine pork slices and chicken with soy sauce, oyster sauce, garlic, rosemary and thyme. Coat the pork and chicken and then marinate for an hour.

Heat a wide cooking pot and then pour in the olive oil. Brown the chicken pieces and remove from pan; then, on the same pan, brown the pork, then add the garlic.

Add the pepper and bay leaves. Continue cooking, then add the remaining marinade, water, red wine vinegar, salt, chicken cube, and simmer the pork for about 40 minutes or till tender. Add the browned chicken pieces, liver and simmer for 20 minutes with the little sauce left.

Add the eggs and cook for 2 minutes.

Transfer to a serving plate and sprinkle browned garlic on top. Serve with steamed rice and baked zucchini, red and green bell pepper.