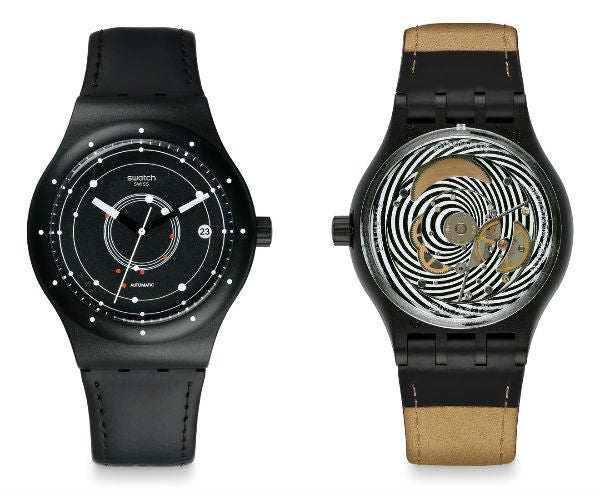 MANILA, Philippines–In 1983, Swatch introduced a simplified, Swiss made quartz wristwatch with only 51 parts. The world’s first plastic watch was made not by hand in the traditional Swiss manner, but on a fully automated assembly line.

Thirty years later, Swatch has done it again with SISTEM51. It is an automatic (self-winding) mechanical movement made from a total of 51 parts. The parts form five separate modules, which are welded into a single unit centered on a single screw.

SISTEM51 is the first and only mechanical movement with fully automated assembly. The high-tech escapement has no regulator; the rate is set at the factory with a laser, making the manual rate adjustments normally required by a mechanical watch unnecessary. The movement, which features a 90-hour power reserve, is made of ARCAP, an alloy of copper, nickel and zinc with exceptional anti-magnetic qualities. All parts are hermetically sealed within the case: no moisture, dust or foreign elements can interfere with performance, assuring a very long life and sustained accuracy over time (+/- 10 seconds per day).

SISTEM51 was conceived, developed and built entirely and exclusively in Switzerland, and in less than two years. Undeniably disruptive of the status quo in the Swiss watch industry, it was made possible by significant continuous investment on the part of Swatch Group in research and development and in key companies in Swatch’s industrial environment. 100% Swiss made, SISTEM51 is a provocation, an audacious challenge to invest, like Swatch, in the future of the Swiss watch industry.