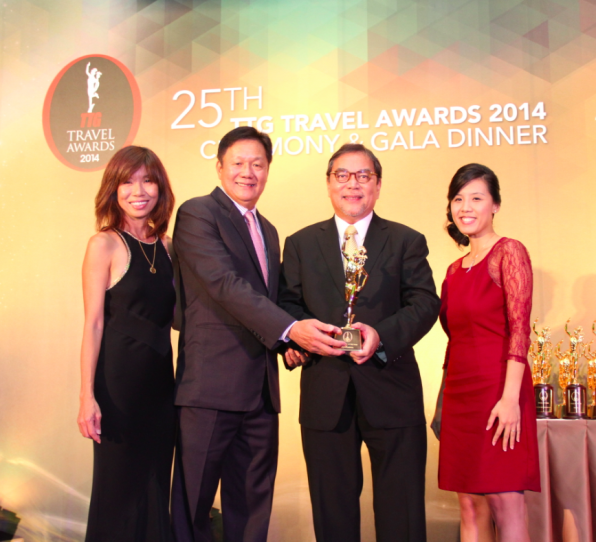 PH is Asia-Pacific’s ‘Destination of the Year’

MANILA, Philippines— Even one of Asia-Pacific’s most prestigious travel and trade resources agrees: It’s more fun in the Philippines.

The country bagged the “Destination of the Year” award during the 25th Annual TTG Travel Awards, the Department of Tourism said in a statement on Thursday.

The Philippines was cited as Asia-Pacific’s “Destination of the Year” for 2014 in a ceremony held in Bangkok, Thailand, because of its “proactive steps and initiatives toward the development of the travel industry.”

Tourism Secretary Ramon Jimenez Jr. accepted the award during the ceremony at the Centara Grand and Bangkok Convention Center in Thailand on October 2.

“This award belongs to all Filipinos. It is the Filipino people that have ensured the acceptance of ‘It’s More Fun in the Philippines’ as a true and accurate description of the participative and active role every Filipino plays in ensuring a successful and enjoyable visit to the Philippines,” Jimenez said.

The Destination of the Year falls under the Outstanding Achievement Awards. Other categories include Travel Personality of the Year, Best Travel Entrepreneur, Best Marketing and Relationship Effort and Best Trade Supporter.

The TTG Travel Awards is one of the most coveted awards in the region’s travel industry, organized by the TTG Asia Media’s Travel Trade Publishing group.

The recognition is seen as a big boost for Philippine tourism, especially as the Department of Tourism prepares its “Visit the Philippines” campaign for 2015.

“Again, the determination of the Filipino people, coupled with the support of our President, Benigno S. Aquino III, is our inspiration to build a brighter tourism future for the Philippines—an industry that is more profitable and more inclusive,” Jimenez said.

It’s more fun in the Philippines

Why you should go to the Philippines