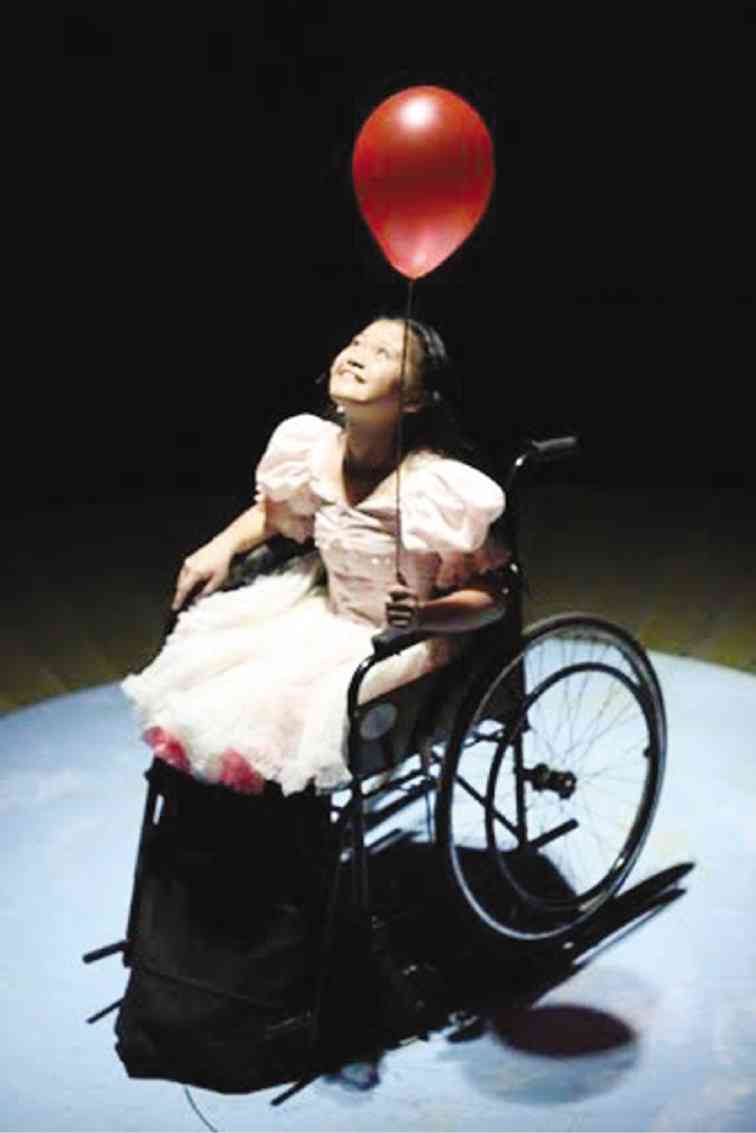 TRIXIE Esteban in “Sandosenang Sapatos,” the Philippines’ entry to the sixth Theater Olympics in Beijing, China

This October, the Philippine Educational Theater Association’s all-male production of “Haring Lear” will tour Taiwan, while the Full House Theater Company’s staging of “Priscilla, Queen of the Desert” will tour Singapore. (Full House is the newly established theater company of Resorts World Manila.)

Using a translation by National Artist for Literature Bienvenido Lumbera of William Shakespeare’s “King Lear,” the Peta production, directed by Nonon Padilla with set and costume design by Gino Gonzales, will be staged Oct. 11-12 at National Taipei University of the Arts. Lighting design is by Jonjon Villareal and music by Dodjie Fernandez.

Peta also recently staged “Strong Boy, Deaf Boy and a Girl in an Abaya” in Japan, at the Showa University of Music in Kawasaki, as part of the Asian Gems of the Arts Concert for the Federation for Asian Cultural Promotions.

The production is a nonverbal, multimedia performance that makes use of contemporary and indigenous Filipino music and movement to tell the story of three children—Strong Boy, a street kid who has to work to survive; Deaf Boy, a simple boy living a frugal life until a storm strikes his coastal town; and Girl in an Abaya, a girl caught in an armed conflict between rebels and soldiers in the southern Philippines—as they journey to a place where they can live and dream without fear and danger.

This production was originally staged 13 years ago for the International Drama and Education Association World Congress in Bergen, Norway. This led to several invitations and touring performances in the Netherlands, Greece and France.

Written by Nicolas Pichay and directed by Dudz Teraña, this year’s staging has been updated to include the experience of children who survived the recent Typhoon “Yolanda” tragedy. Musical direction is by Jeff Hernandez, and set and costume design by Joan Pamintuan.

“Strong Boy…” will also have a limited two-show run from Oct. 29 to 30 (twinbilled with an excerpt from Peta’s latest season production “FnL”) at The Imaginarium Multi-Arts Festival of the Absurd, Peta Theater Center, Quezon City.
(Contact 0917-8996680. Tickets are also available through TicketWorld at 8919999 or ticketworld.com.ph.)

The musical, with book by Stephan Elliott and Allan Scott, stars Michael Williams, Jon Santos and Red Concepcion as three gay friends who travel across Australia on a bus they christen as Priscilla.

In November, Tanghalang Pilipino’s musical version of “Sandosenang Sapatos” will be the Philippines’ entry to the sixth Theater Olympics to be held in Beijing, China.

“Sandosenang Sapatos” is a children’s musical based on Luis Gatmaitan’s Palanca Award-winning children’s book adapted by Layeta Bucoy, with music by Noel Cabangon and Jed Balsamo.

The story is about a shoemaker who dreams of having a ballerina daughter but ends up with a crippled daughter. The TP production, where several kinds of shoes appear as characters in the show, premiered last year and has had several reruns, including a limited 15-performance rerun last August at the Cultural Center of the Philippines (CCP).

The musical was commissioned by the Philippine Board on Books for Young People in cooperation with CCP as part of the celebration of the 28th National Children’s Book Day last year.

Celebrated every third week of July, the National Children’s Book Day is held to commemorate the anniversary of the publication of Jose Rizal’s “The Monkey and the Turtle.”

The first musical adaptation of the book, created by the Valenzuela City Center for Performing Arts in 2008 with music by Jesse Lucas and adaptation by Jose Jeffrey Camañag, was recently restaged by Gantimpala Theater.