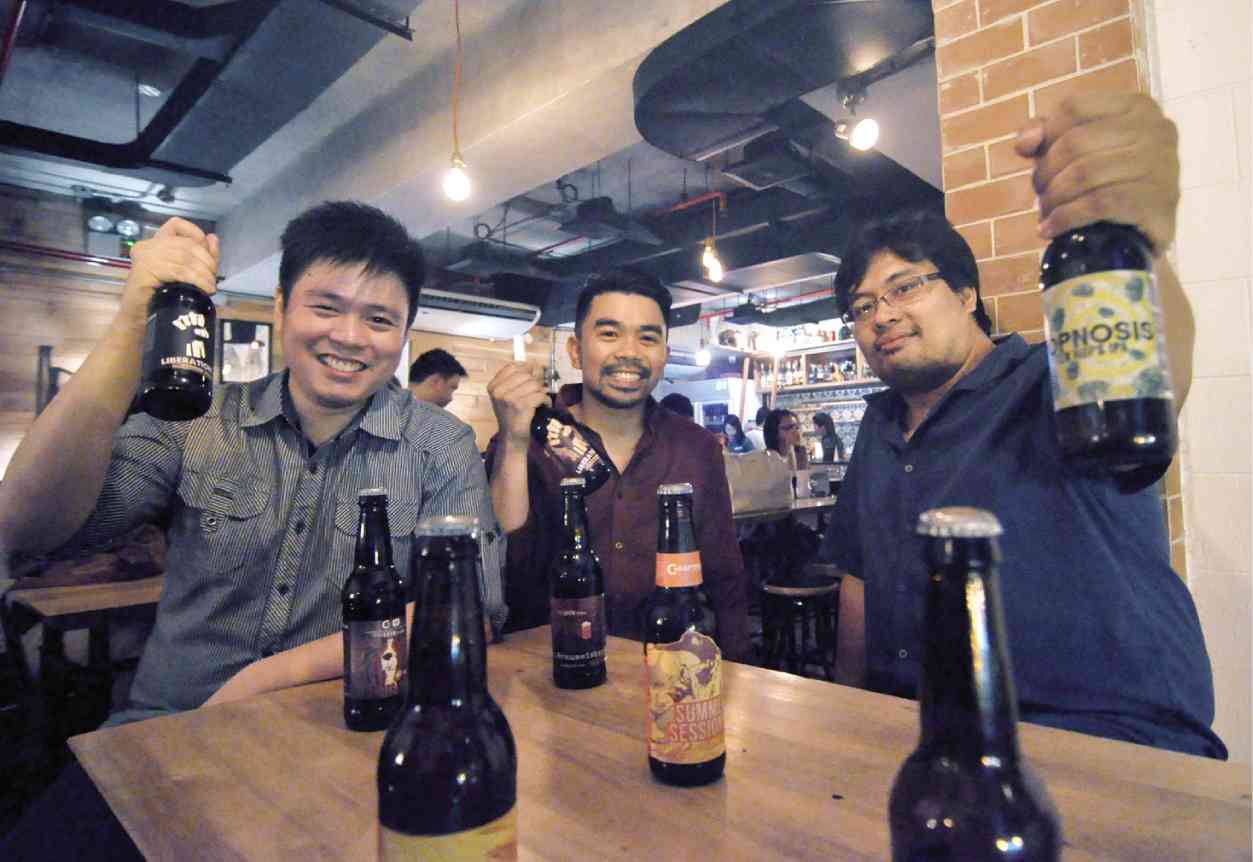 While they still see themselves as a “drop in the bucket” that is the beer industry, Aldous Bernardo, Marvin Moreno and Chip Vega of Craftpoint Brewing Co. have proven that there is a thirst for craft beers among the local drinking public.

For one, Craftpoint celebrated its first anniversary last August, during which it showcased 10 brews (last year it started with only two—Summer Sessions and Liberation). Five of these beers are results of “collabrewations” with various bars in Metro Manila, including Big Bad Wolf in Bonifacio Global City where Craftpoint launched its beers and marked its anniversary.

“Our first collaboration with Big Bad Wolf was called Big Bad Beer. It’s hoppy brown ale—so you get all the bitterness from chocolate, coffee; the citrusy flavor is from the hops,” said Moreno, the only one among the trio who works full-time with Craftpoint.

“Erwan requested that we put in mangosteen, because when we sat down to brainstorm, that fruit was in season,” said Moreno. “[It’s difficult] because mangosteen is expensive, plus the fruit is very small. It took around three months to make, from conception to production. We had to do much iteration until we were satisfied with the tangy taste of the mangosteen.”

A different challenge came with the tie-up with Prost Braumeister in Taguig. “Mr. Braumeister is a German pale ale… Germans are very traditional. They’re not open to experimentation,” said Moreno.

“The taste is pretty basic, but it’s actually one of our better-tasting beers,” added Bernardo. “We used techniques that German brewers don’t usually do but with German beer ingredients.”

Coffee beers called Night and Day are being carried by café/bar The Curator in Makati.

“At first, the idea was that Night and Day would just be one beer. But when we let people try it, we got mixed results,” said Moreno. “Coffee lovers said, ‘We want more coffee in it’; beer drinkers, on the other hand, said, ‘We want more beer in it.’ So we made two.”

From Moreno’s garage, Craftpoint has moved production to a “brew lab” in Edsa Beverage Design Studio.

Its three new brews, all made within a month, are Summer Passions, a light, fruity beer made with passion fruit; Hopnosis, bitter but aromatic Indian pale ale; and Pandan Porter, dark beer mixed with pandan.

“The Pandan Porter was first released at a wedding of a friend. It was our gift to the couple,” said Bernardo. “It was a huge hit, we decided to include it in production.”

With a growing demand for craft beer, the three plan to come up with more “collabrewations” in the coming years.

“We see that the market actually has an appetite for flavors and concepts that are out of the ordinary,” said Vega. “I think the interest [in craft beers] has grown over the last year because more restaurants have been able to introduce and sustain it in their offerings.”