From the rest of the world to Little Rock, the fiercely Batangueña returns home | Inquirer Lifestyle ❮ ❯ 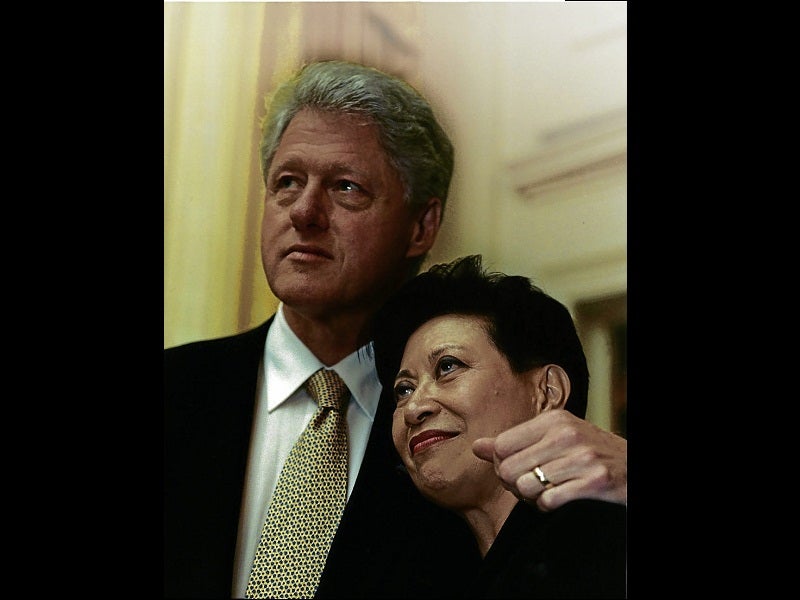 From the rest of the world to Little Rock, the fiercely Batangueña returns home 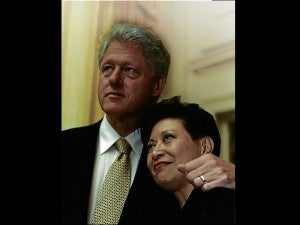 Mourners gathered in the early afternoon of Saturday, Oct. 8, at the requiem Mass and last rites for Marilou Mabilangan Haley at the Rockwell Ateneo Law School Chapel. The rites were officiated by Fr. Lito Mangulabnan, SJ, the chaplain.

Her urn of cremated ashes arrived in the Philippines from her home state of Little Rock, Arkansas, last Oct. 2, with her brother Ambassador Felipe Mabilangan Jr. and his wife Ada Ledesma Mabilangan.

Today, Oct. 9, a convoy of family and friends will drive to Sto. Tomas, Batangas, for the interment at noon. Mabilangan’s last wish was to be buried beside her parents in their home province. The Hugo relatives of her late mother, Felisa Hugo Mabilangan, have prepared funeral rites at the Sto. Tomas Cemetery.

Marilou will always be remembered not only for her achievements, but also for her big heart. She was a young Filipina who excelled in the exotic traditional dances of India where she grew up as a diplomat’s daughter; the Filipina model fluent in French who walked the fashion ramps of Paris; the good sister who mastered the culinary magic of masquerading leftovers so brother Philip would be fooled into eating them, as he refused to eat ropa vieja (old food). 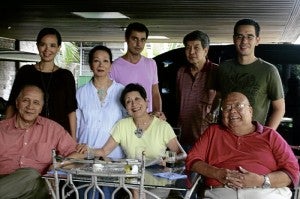 She was the first Filipina hotelier of the Hilton Hotel International chain with the opening of the five-star Manila Hilton (the tallest building of the country in the ’60s). She traveled around the world to promote Philippine tourism. She established the Karilagan Finishing School with Conchitina Sevilla, another top fashion model of the era, where Filipino students learned social graces, charm and poise.

In the mid ’60s, she was a co-founder of the Scholarship Foundation of the Filipino Youth (SFFY), with Heherson Alvarez, Riccardo Delgado, Arturo Macapagal, Mariter Jalandoni and Marla Yotoko. The scholarship funded the college education of numerous talented underprivileged students. In 2010, Marilou exclaimed, “And now I want to give back!” in her acceptance speech as an awardee of the Vision Award from Lions World Services for the Blind Foundation, founded in 1947 on Helen Keller’s inspirational words: “Alone we can do so little. Together, we can do so much.”

With the humanitarian Community and Family Services International, Marilou was able to raise funds to build much needed classrooms for students of Inug-Og Elementary School in Mindanao.

But more than a woman of consequence, Marilou was also a true Pinay—for her down-to-earth attitude, sense of humor, loyal friendship and undying love for the Philippines.

Those who knew her well caricature her fondly as Maria Clara incarnate. She was traditional, Old World despite her global citizenship. She claimed, “You can never take away the probinsyana in me!” And with slit eyes and wide smile, “I will always remain a fierce Batangueña.”

During her Manila Hilton days in UN Avenue, like a blue-blooded Batangas dalaga (maiden), she kept in her pocket or handbag a Batangas balisong (flip pocket knife). She was often teased that, with such protection, she will “remain a virgin spinster all your life.”

But she had a lot of Filipino admirers—Manila’s eligible bachelors, young politicians, culture vultures. Once, her hotel colleague Noemi Dolendo asked, “Whatever happened to that handsome banking heir?” She replied with a sigh, “Am not rich…” 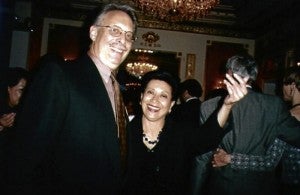 She fell in love with Arkansas lawyer John Haley, a Manila Hilton guest introduced to her by then Foreign Affairs Secretary Raul Manglapus. John, who was also a pilot, scoured the Philippine clouds with his lady love—properly chaperoned, of course, by bosom friend Araceli Pinto, who later headed the Citem international exhibitions of the country.

In Washington DC, where Marilou became part of President Clinton’s White House team, she indulged us her expat friends—Evelyn Teehankee Zulueta of California; Lydia Aunario Ballard, resident of nearby Potomac; and myself from New York—with a tour of the White House and Oval Offices where on the lawn, President Bill Clinton shook our hands tightly while he kissed Marilou on both cheeks.

Mesmerized by his tall figure, ocean-blue eyes, handsome smile and small talk, we swore not to wash our hands for a week. At the mess hall during lunch, Sen. Ted Kennedy and his congressman nephew nearby, as well as cabinet members such as Secretary of Human Services Donna Shalala and Secretary of State Madeleine Allbright, all greeted her with “Hi Maria!” 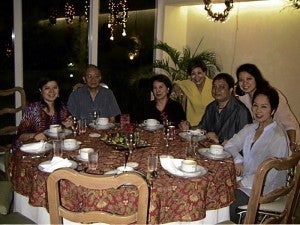 We were impressed; we went home with Marilou’s gifts of silver trimmed black White House mugs, from which I drank my coffee thereafter at home, imagining blue-eyed Bill before me. Nowadays, I will think instead of Marilou’s kind cocker spaniel eyes.

As a constant balikbayan, Marilou would immediately savor the Pampanga cuisine of Makati’s Cabalen restaurant with dear friend Noemi Dolendo.

“Marilou craved kakanin, especially fried banana,” Noemi recalls. “When her mother was alive, she asked for her mom’s chicken curry, a favorite ever since their stay in India, Pakistan and Laos.”

She also relished the serenity of her brother’s family holiday home in beautiful Punta Fuego, by the sea.

Marilou was many things to many friends, each one uniquely special.

One of her last encounters was with Fil-Am friend Maricris Tabora in Chicago. She was concerned about Maricris’ health, and met her last August while she attended a Clinton Initiative meeting in the city. 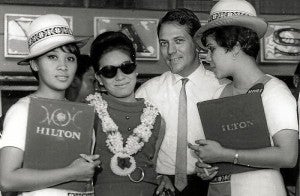 “Busy as she was, she had gone out of her way to ask if we could spend the day before she returned to Little Rock,” says Maricris. “We did just that. It was a joy to trade thoughts, perspectives and plans. As we all know, she was blessed with career choices many women would have died to have, but she had chosen to return to Arkansas.

She loved her work for the state and her Governor, but more happily, how important her Haley clan had become to her… We talked about the need to slow down and breathe deeply… We parted with promises to get together in Manila during the coming Christmas holidays.”

Adds Maricris, “Marilou had been exploring retirement possibilities in her mind, and Manila, her family and friends were an equal tug on her head and heart.”

Marilou doted on the three children—Joey, Nana and Lisa—of her brother Philip and his wife Ada.

Nana says Christmas without her aunt would mean the absence of an important presence, she who usually doled out choice cuts of steaks and lamb—“the best butcher of Little Rock.”

“Tita Marilou would bring so much that even after the family reunion meals, there would be so much left in the freezer. We will sorely miss her—seeing her so stylish with red wine in hand to toast us. But surely, she will always be watching over us.”

Marilou’s last communication with me came as I was finishing the last details of our Manila Hilton book of memoirs with co-editor Letty Jacinto Lopez.

I urged her to try to remember the participation of the three couturiers Pitoy Moreno, Aureo Alonzo and Ben Farrales in designing the Filipino-inspired uniforms of the Manila Hilton staff during her time.

“Yes, Marlissima, I learned you were in the hospital and I am really sorry about your illness. The reason you have not heard from me is that I was sick, too. Nothing serious but just a series of illnesses: first, pneumonia, then a major back problem caused by dancing the Zumba with full abandon and several disc dislocated… lots of pain… Then to have major dental surgery. So the last two months have not been the best months. But getting better and feeling better, and I was in Chicago a couple of weeks ago and was with Cris Tabora for a day… What about your surgery?… I cannot pinpoint whose idea it was to hire the couturiers to do the Manila Hilton uniforms. It may have been GM Holmes’ idea and since I was his assistant then I think I had to follow up… but you Marlissima and Carmita Francisco must have helped as I recall. I remember it to be such fun.”

She signed her e-mail, “Much love to all, from Malsy.”

The book, “Heartbeat Manila Hilton,” will be launched in November as a tribute to the memory of Marilou Mabilangan Haley, who would have turned 71 on Nov. 14.

The guests of honor will include the patriarch Francisco Delgado and Nellie C. Delgado, widow of Ambassador Antonio Delgado of the Delgado Brothers, owners of the landmark Manila Hilton of decades ago, and the Mabilangan Family.