Bituin Escalante in concert: ‘I will grab it by the horns!’ | Inquirer Lifestyle ❮ ❯ 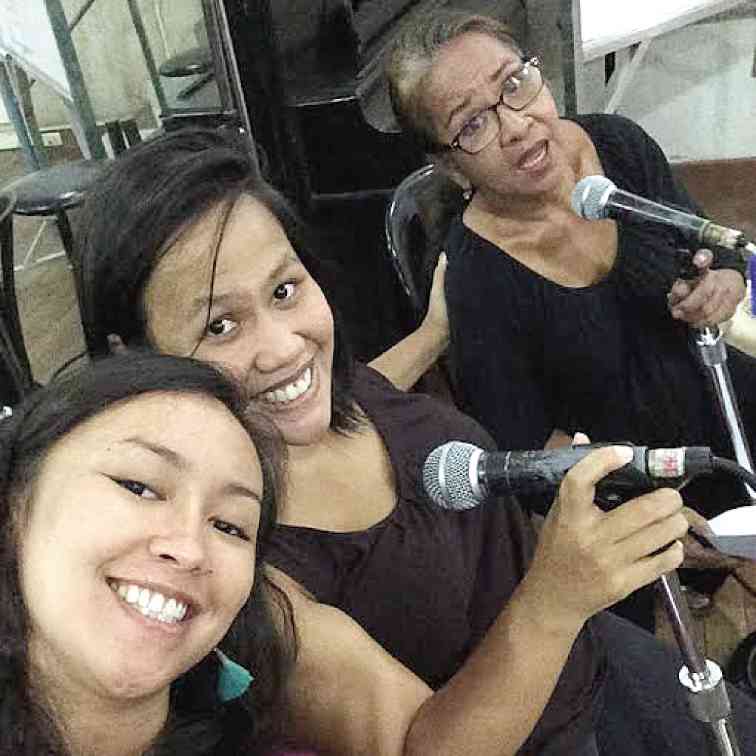 Bituin Escalante in concert: ‘I will grab it by the horns!’

Bituin Escalante can go easily from diva to man drag. She was recently seen in Resorts World Manila’s production of “Priscilla, Queen of the Desert” as a glam diva, and now she is playing the stern Coachman in Repertory Philippines’ “Pinocchio,” a children’s musical.

Children, she says, are “the best audience.”

“They are honest, generous, mean. They keep you on your toes. There’s nothing like hearing the sound of small hands clapping,” she points out.

Rep’s “Seussical” introduced Escalante to the joy of performing for children. She was then pregnant with her daughter Luna, now 3.

“I said yes before I got pregnant,” she says. “I did it for three months before going on leave a month before giving birth. I think I’d do children’s theater for the rest of my life.”

For “Pinocchio,” she plays the part of a man and sings in baritone—a challenge for a singer who belts out the high notes like she did in “Priscilla,” and in other roles she has memorably played, among them Effie White in “Dreamgirls,” Mimi in “Rent” and Asaka in “Once On This Island.”

The mother of two balances her time between theater, her family and, these days, rehearsing for her upcoming concert called “Everything in Bituin,” to be staged Oct. 9, 7:30 p.m., in Tanghalang Aurelio Tolentino (CCP Little Theater), with Audie Gemora directing.

The show is the last leg of the Cultural Center of the Philippines’ “Triple Threats” series which earlier featured solo concerts by Sheila Francisco and Michael Williams.

Last year, the series was headlined by Nonie Buencamino, Audie Gemora and Menchu Lauchengco-Yulo—all receiving positive reviews and reception. As the last one to perform this year, Escalante says she is “happy to even be considered,” but admits she is very much under pressure.

“I’ve had high expectations of them, then I joined in,” she says with a laugh. “There’s something to compare me against, and I also can’t help making comparisons. I watched Michael’s show and I fell in love with it.”

She has done several solo concerts and lots of lounge shows, and values the prestige of performing at CCP.

“My audiences have seen me in bars, but I hardly expect them to come to CCP,” she says. “The theater audience might watch; I’ve also done mainstream, but I don’t know which audience is coming. I don’t want to know. The idea freaks me out.”

But one thing is for sure, the people who will watch “Everything in Bituin” are in for a surprise. She has already done her dream set list in previous gigs, so she will perform songs “they’ve seen me do, and some they don’t expect to hear from me, and some that I may never have an opportunity to do in any theater.”

Theater is Escalante’s first love. She started at age 19, with Celeste Legaspi’s Musical Theater Philippines, and joined groups such as Tanghalang Pilipino and Peta in the ’90s.

She took up Film at the University of the Philippines Diliman, but quit and went full time into theater. “I never felt the need to go back to school, and someday my children might use that against me in an argument, but I will cross the bridge when I get there.”

She has released three solo albums, and has performed with artists such as Michel Legrand, Jim Brickman, David Benoit and Apo Hiking Society.

Singing is a product of growing up in a household filled with music. She remembers her parents giving her and her sister, Kalila Aguilos, also in theater, “free rein over the stereo.”

“They weren’t fussy parents. They let us play music, and we played Hiroshima, Glenn Miller and his orchestra, the soundtrack of ‘Jesus Christ Superstar’ and ‘Fiddler on the Roof,’ big bands and jazz,” she says. Her mother is highly esteemed singer Gigi Escalante.

She plays lots of music at home, too, and her kids listen to both classical and pop. Luna, 3, and Tala, 2, are so named “for consistency,” says their mother, since “bituin” is Tagalog for star.

Her daughters have watched her and her husband in “Pinocchio,” which they enjoyed. Her husband Mano Domingo is part of the ensemble.

Her family has always been supportive of her career, and she considers her mom Gigi her number one and most credible critic.

“Reading reviews or people’s comments online is considered, but they can’t hurt me. But when it’s the people closest to me, such as my mom, who says I performed badly, I listen and take it in. I have to. I also call my sister for a conference,” she says.

“There are times when people are raving, congratulating and leaving me thinking I did great, but one look at mom, and she’s not gushing, and I already know. Oh no,” she adds. “On the other hand, if I was really good, she can’t help herself but be really warm afterwards.”

Mommy Gigi will be watching “Everything in Bituin,” along with Escalante’s family and theater friends. There’s pressure, and some comfort, since the show is also a homecoming of sorts for her after performing in CCP with Tanghalang Pilipino.

“Lets do it!,” says Escalante. “How many chances will you get to have the CCP Little Theater all to yourself? I will grab it by the horns.”