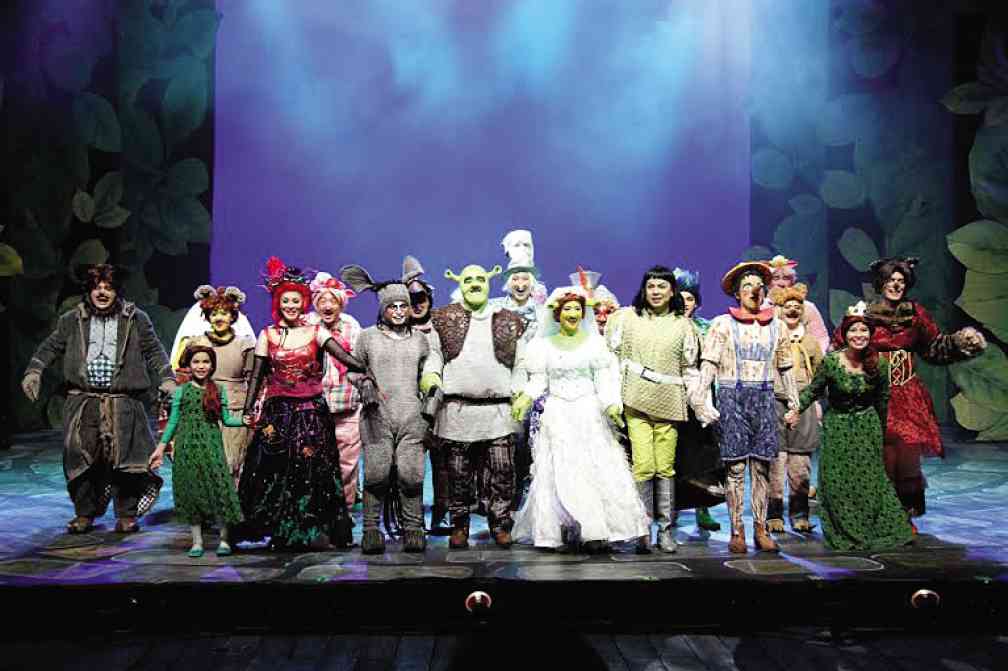 THE CAST of “Shrek The Musical” taking their bow FRANCO LAUREL

The anti-Disney ogre has become a tad too square

“Shrek The Musical,” which is running at Meralco Theater until Oct. 12, is a solid production. The production values are phenomenal. The props and costumes are well-made, the acting is competent, and the lights, sound and other fiddly bits that many productions this big get wrong or unevenly are done right.

But Atlantis Productions’ staging of “Shrek The Musical,” directed by Bobby Garcia (the book and lyrics are by David Lindsay-Abaire, the music by Jeanine Tesori), also appears to be so focused on glamour and glitz that it seems to have forgotten what made “Shrek” popular in the first place.

The play is simply too safe.

I was sharing the theater with people of all ages, including six classes of eighth graders from Elizabeth Seton Catholic School. The little girl leaning adorably on her father’s shoulder beside me was delighted, waving her arms at the songs and generally having a good time as all little princesses are wont to do.

But then there was also the little boy behind me who, during intermission, asked his mom if they had to stay for Act 2. A parent in front of me kept surreptitiously checking her cell phone. And the audience was quiet and dignified, applauding politely each perfectly produced musical number.

If you want to put on a comedy, you need a willingness to cross lines. The audience has to be game, and the cast’s interaction with them has to be unconventional. But everything about “Shrek The Musical” feels conventional. Well done, but colored entirely within the lines.

The original “Shrek” was a game-changer from a storytelling perspective. It succeeded because it was metafictive; it knew it was a story and played around with that fact for all it was worth.

The musical version’s best moments come when it lives up to that legacy: the gag about Edsa traffic, for instance, or the brief but telling jab at a certain recent Disney movie.

“Shrek” succeeded because it was a pointed parody of Disney’s traditional mode of storytelling. But this production’s understanding of this key fact is spotty.
In Act 1, only Princess Fiona gets it. Shiela Valderrama-Martinez plays the character with a bawdy self-awareness that is badly, badly needed in the first act. Rycharde Everley plays Shrek with excellent timing and an accent that makes you wonder when he’ll declare independence from the United Kingdom, but he is very obviously constrained by the role of the protagonist—he plays the role of the hero utterly straight.

This straight-as-an-arrow approach gets results in the second act. Shrek and Fiona get some genuinely fun bonding moments. “When Words Fail” is a very sweet song. Nyoy Volante gets the audience laughing in “Three Blind Mice.” Jett Pangan, content in the first act to be a cartoonish supervillain, starts to show some nuance in his numbers here, which is great—it’s not easy to do that kind of acting literally on your knees!

The play is at its strongest when it is subverting our expectations and playing with the conventions of fairy-tale storytelling. It is at its weakest when it tries to be a straight-up love story or friendship story or revolution story.

There are gags aplenty, but they’re knock-knock jokes compared to the transgressive, self-aware comedy of, say, “The Producers” or “Spamalot.”

I would think that if you’re going to price your show in the same league as the heavyweights, it needs to be a heavyweight itself.

“Shrek The Musical,” sadly, is not. It plays things too straight to be an effective parody and the storytelling is conventional to the point of being cliché, right down to the romantic misunderstanding in the second act lifted directly from the rom-com manual.

I am not a big fan of the idea that children’s entertainment has to be dumbed down. Disney, for example, grew past the supervillain-versus-the-princess-in-the-tower dynamic a long time ago.

The mother-daughter conflict in “Brave” will sound familiar to any parent with a teenaged daughter. Mother Gothel from “Tangled” is a terrifyingly accurate portrayal of an abusive parent. Elsa’s portrayal in “Frozen” won acclaim from the parents of children with special needs.

In the face of such evolved storytelling, “Shrek The Musical” can only work by playing the old clichés to their logical extreme and showing us why they were silly and fun—then. By sanding off the ironic edge of the original material, this production appears quite dated as a result.

When the show ends, many in the audience did give it a standing ovation. Nonetheless, I stand by my conviction that audiences should demand more from their family-friendly comedies—especially expensive ones with a top-tier cast and crew.