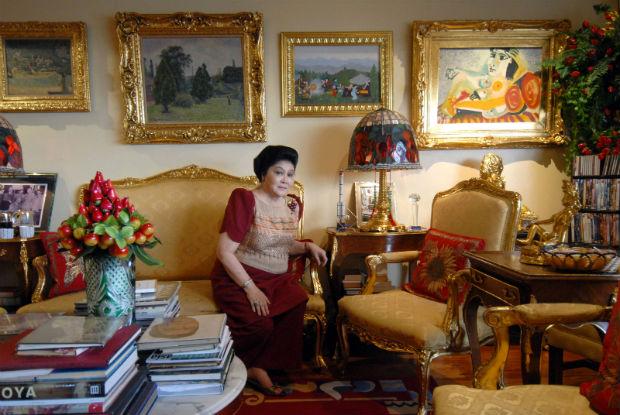 This file photo taken on June 7, 2007 shows former first lady Imelda Marcos is seen in her apartment in Manila with a gallery of paintings including a Picasso, seen at upper right. Philippine authorities moved on September 30, 2014 to seize paintings by Picasso, Gauguin, Miro, Michelangelo and other masters held by Imelda Marcos after getting a court order against the former first lady. AFP/ROMEO GACAD

MANILA, Philippines—Authorities literally faced a blank wall at the Marcos Museum in Batac, Ilocos Norte, on Friday, when they searched for prized artworks by world-renowned painters on orders of the Sandiganbayan.

Andres Bautista, chair of the Presidential Commission on Good Government (PCGG), said authorities failed to find the paintings on the antigraft court’s seizure list at the museum, the fifth location in the government’s search.

After an hour of search inside the museum, no painting was found except for the family portraits of the Marcoses.

The PCGG has been on top of the government’s efforts to recover the ill-gotten wealth of the late strongman Ferdinand Marcos and his family.

“I am still awaiting the report of the sheriff, but, initially, they didn’t find anything, just blank walls,” Bautista said when reached by phone Friday night.

“That’s the problem with moveable objects. They’re easy to hide or transport,” he said.

Agents of the National Bureau of Investigation (NBI) and the PCGG raided the museum at around 10 a.m., searching the Batac location as part of an operation to find several artworks, including paintings by renowned artists.

The staff of Ilocos Norte second district Rep. Imelda Marcos were present during the raid.

The Sandiganbayan had ordered its sheriff, the PCGG and the Office of the Solicitor General to search five Marcos addresses to find roughly 140 artworks, known to be part of an extensive collection of the Marcoses during the martial rule.

Bautista said these include locations on Ayala Avenue in Makati City and McKinley Road in Taguig City, the Batac museum, the San Juan property of Marcos’ widow and now lawmaker Imelda, and her office at the House of Representatives.