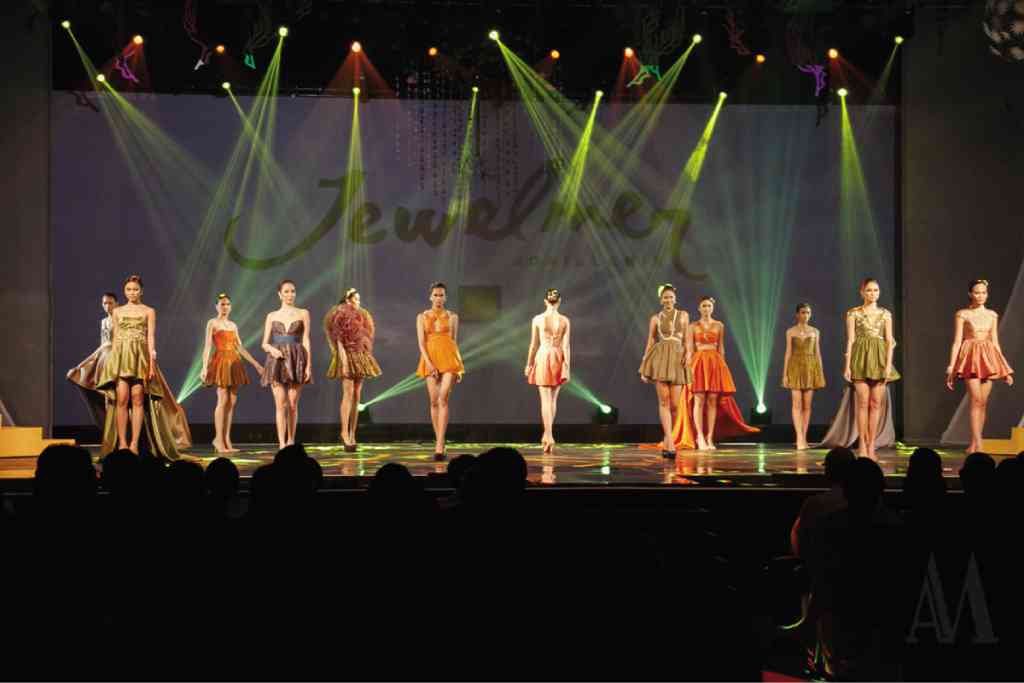 Welcome October! If September was busy with birthday celebrations, then October ups the “hecticness meter” a notch with even more festive affairs as we enter the ball season.

Co-chair Kaye Tiñga and I are deep into the planning for the Red Charity Gala on Oct. 18 at Makati Shangri-La. We have a ton of sponsors to thank, so I thought I would start with four who are supporting us this year.

Jewelmer Joaillerie has been a generous sponsor of the Red Charity Gala and is one again this month. The firm recently celebrated the “Miracle of the Golden Pearl,” their 35th anniversary bash that focuses jewelry, fashion and entertainment, all around the South Sea pearl.

Gonzalez and Apples Aberin were among the honored guests.

The event was also the launch of Jewelmer’s spring-summer 2015 Collection, which was inspired by the elements earth, air and water. Among the models showing off the pearls were beauty queens Venus Raj and Shamcey Supsup. Top fashion designer Rhett Eala provided stunning couture creations for the girls, while the show was directed by Elmer Lapena and Robby Carmona of Saga Productions.

Kaye and I are looking forward to auctioning off one of Jewelmer’s stunning pieces, proceeds of which all go to charity.

Another prized auction item is the Louis XIII Grande Champagne Cognac, the rare and exclusive premium cognac brand from the House of Remy Martin. Cognac enthusiasts were recently feted at a dinner at the ultra-elegant Genting Club at Resorts World Manila.

The Louis XIII is the “King of Cognacs,” having been specially blended from 1,200 eaux de vies, and then aged in tiercons, oak barrels that are several centuries old. The spirit comes in a handcrafted, Baccarat-crystal decanter, which is a work of art in itself.

The Genting Club dinner featured the fine cuisine that Resorts World is known for, along with Russian artists performing exciting musical pieces. The ambience was the perfect setting to then enjoy the Louis XIII Grande Champagne Cognac, all masterfully officiated by Christophe Bourrie of Remy Cointreau International.

Christophe has been to Manila many times and his anecdotes and pointers on the fine art of sampling cognacs are always great to hear. Steven Riley, EVP of Resorts World, and Joey Pineda, commercial manager of Remy Cointreau International, were around to ensure that all the guests had the perfect evening.

Another frequent sponsor of the Red Charity Gala is beautiful Nikki Tang and her DermAsia, the leading distributor of state-of-the-art, noninvasive, dermatological aesthetic devices. She recently celebrated the firm’s 10th anniversary with a well-attended party at the Fairmont Hotel.

Leading skin-care practitioners and physicians were treated to a feast for the senses as DermAsia unveiled the iLipo Multi-Platform Contour System, the most advanced, nonsurgical, fat-reduction and body-shaping system from Chromogenex, one of the leading exponents of laser technology in the UK. The breakthrough device utilizes low-level lasers as effective treatment for smoothing cellulite and body shaping in a process called “photobiomodulation.”

A new sponsor of the Red Charity Gala is Wilcon Depot. For its ongoing raffle promo, “Dream Big and Win Big at Wilcon,” the company recently drew the lucky winner of a brand new Mercedes-Benz B180 sedan. Customer Rodell Nicetas Rueda was picked, and another 20 winners received Wilcon gift certificates.

Wilcon has provided high quality construction and home décor supplies to Filipinos for 40 years, and “Dream Big and Win Big” is a big, 12-million peso thank you to all its customers. The five-draw raffle bonanza has several more draws upcoming.

Check www.wilcon.com.ph for more info on the raffle.

With Jewelmer, Louis XIII, DermAsia and Wilcon, the Red Charity Gala is sure to be one of the fun balls to attend this October. Speaking of balls, we had one at the “Potted Potter” show last week at the RCBC Theater. The Brit duo provides hilarious takes on J.K. Rowling’s beloved characters, all in good fun, of course. The show runs until only tonight.