In praise of teachers | Inquirer Lifestyle 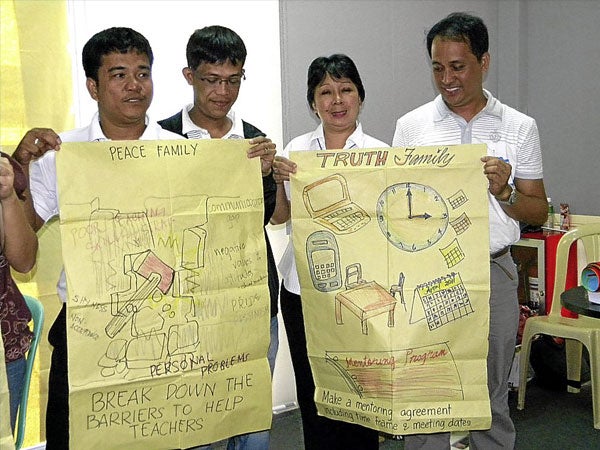 In praise of teachers

Today is the worldwide celebration of Teachers’ Day. As a tribute to these men and women who are often overworked, underpaid and unappreciated, allow me to dedicate our reflections this Sunday to them and to the teacher in us.

Allow me to reprint a piece—supposedly part of a principal’s speech—that circulated on the web over a week ago.

“The dinner guests were sitting around the table discussing life. One man, a CEO, decided to explain the problem with education. He argued, ‘What’s a kid going to learn from someone who decided his best option in life was to become a teacher?’

“To stress his point he said to another guest, ‘You’re a teacher, Bonnie. Be honest. What do you make?’

“Teacher Bonnie, who had a reputation for honesty and frankness, replied, ‘You want to know what I make? (She paused for a second, then began…)

“‘Well, I make kids work harder than they ever thought they could. I make a C+ feel like the Congressional Medal of Honor. I make kids sit through 40 minutes of class time when their parents can’t make them sit for five minutes without an iPod, Game Cube or movie rental.

“‘You want to know what I make? (She paused again and looked at each and every person at the table.) I make kids wonder. I make them question. I make them apologize and mean it. I make them have respect and take responsibility for their actions.

“‘I teach them how to write and then I make them write. Keyboarding isn’t everything. I make them read, read, read. I make them show all their work in math. They use their God-given brain, not the manmade calculator.

“‘I make my students from other countries learn everything they need to know about English while preserving their unique cultural identity.

“‘I make my classroom a place where all my students feel safe.

“‘Finally, I make them understand that if they use the gifts they were given, work hard and follow their hearts, they can succeed in life. (Bonnie paused one last time and then continued.)

“‘Then, when people try to judge me by what I make, with me knowing money isn’t everything, I can hold my head up high and pay no attention because they are ignorant. You want to know what I make?

“‘I make a difference in all your lives, educating kids and preparing them to become CEOs, and doctors and engineers. What do you make Mr. CEO?’ His jaw dropped; he went silent.”

This, essentially, sums up the work of a teacher: helping others realize their giftedness, teaching them the discipline of hard work and encouraging them to do things with great love. It is this work of the teacher—what a teacher makes—that is akin to the message of this Sunday’s Gospel.

The work of a teacher

The Parable of the Vineyard is fair warning that there will be a day of reckoning for what has been entrusted to us. It is a day of “reckoning” not so much for the good of God, but for us to take stock of what we have done with the gifts and blessings we were given; the stewardship we were called to.

The work of a teacher is to prepare others for this day of “reckoning.” They do this by making their students believe in themselves and be grateful for their blessings.

Earlier this year, one of my former colleagues at the Ateneo de Manila High School faculty told me this story. At a wake, a young man came up to him and introduced himself.

“Sir, I was your student in high school back in 1997. Do you remember what happened to me?” My former colleague smiled, but before he could say anything the young man continued.

He narrated how he found out how this teacher of his prevented his being kicked out. He had failed three subjects and was asked to leave the school.

When he was given that second chance, not only was he relieved, but he also realized how much he had wasted his opportunities. The setback turned into a life-changing experience. He resolved to make something out of himself.

He finished high school. Got into college. Earned an MBA while working in a bank, and was recently appointed vice president of the bank.

This teacher made this student, his students “understand that if they use the gifts they were given, work hard and follow their hearts,” they will make something out of themselves.

Rizal and his Jesuit teachers

There is a famous story about Rizal and the Jesuits of the then Ateneo Municipal de Manila. The story varies in the details. The more common version is that as Rizal walked from his cell at Fort Santiago to his execution in Bagumbayan, he saw the Ateneo in Intramuros and said, “I owe a great deal to the Jesuit order—almost, almost everything that I am.”

This story about Rizal, his Jesuit teachers and the Sacred Heart from Fr. Victor Badillo, SJ, beautifully sums up how teachers can truly make their students believe in themselves and be grateful; express their gratitude through hard work; do things with love, great love.

“While a student at the Ateneo Municipal in Intramuros, Jose Rizal made a small statue of the Sacred Heart, about nine inches in length. He carved the statuette in batikuling wood with a penknife at the request of his professor, Fr. Jose Leonardo, SJ. The latter intended to take it with him to Spain, but the helper forgot to place it in his trunk. It was left behind and was taken by Rizal’s fellow students. It was then placed on a shelf above the door of their study hall where it remained for 20 years.

“In August 1887, Rizal returned to the Philippines and stayed till early 1888. Now a liberal in matters political as well as religious, he visited his Jesuit friends at Ateneo. On his way out, the Jesuit porter showed him the statuette. Rizal replied, ‘Other times, Brother, other times. I no longer believe in such things.’

“In December 1896, after Rizal was sentenced to death by the Military Tribunal on charges of treason, he asked for some Jesuit priests to visit him. Fr. Miguel Saderra Mata, SJ, rector of Ateneo Municipal, together with Fr. Luis Viza, SJ, went in haste to Fort Santiago to the cell where Rizal was imprisoned. They were greeted warmly by Rizal.

“Rizal asked them if the statuette of the Sacred Heart which he had carved as a boy was still at Ateneo. Father Viza, in reply, took the statuette out of the pocket of his soutane. He had guessed rightly. Rizal would remember it at the hour of his death. Rizal took it and kissed it in his hands and placed it on the table where he would soon write the “Mi Ultimo Adios.”

There is a day of “reckoning.” Rizal faced his not just with conviction and courage, but with a confession, “I owe a great deal to the Jesuit order—almost, almost everything that I am.”

In his final hours, he makes his peace with God. As he takes his final journey to his death, he kisses the symbol of his faith that nurtured him as a boy and to which he returns, coming full circle.

To all our teachers, today we pay tribute. They who made us live a life using our heart rightly—to do all things with love, great love by doing everything for God.