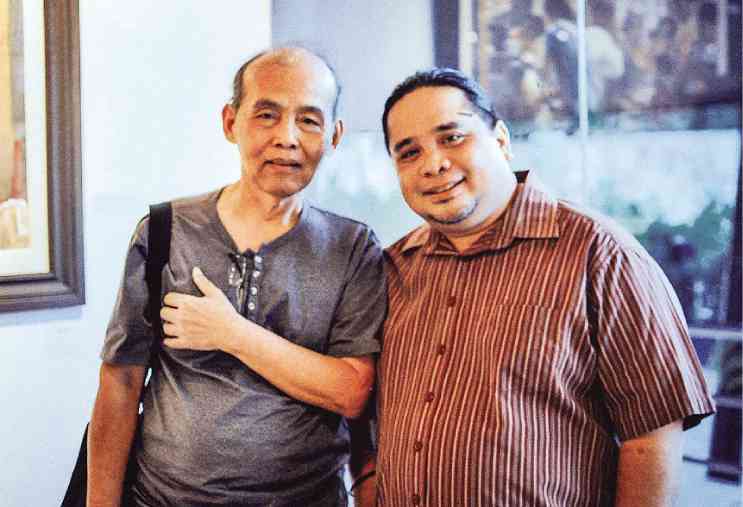 Feast of watercolors and abstracts at Cebu’s Qube Gallery

Opening day saw gallery owner Maris Holopainen welcoming a large crowd of art enthusiasts and collectors. Many of them have been familiar with the exhibiting artists through the years.

Helping Maris entertain the large attendance were the gallery’s efficient staff: Bea Sagun, Evetthe Aller, Joan Piano, Brenda Oblianda and external managing director Dennis “Sio” Montera, himself an accomplished painter. He may soon pursue a doctorate in Taiwan but will not lose touch with Qube, he avers.

“Water Proof” closed on Sept. 24, by which time Qube Gallery was ready for another important exposition. Now it is “Things to Come,” a collection of abstract works by Cebuano artist Leopoldo Aguilar.

Eminent glass sculptor Ramon Orlina has said of Leopoldo that he paints “like an uncontrolled Pollock!” The exhibit is on view until Oct. 8.

On Oct. 11-24 Qube Gallery will host a benchmark exposition by Hans Brumann titled “Cruces.” He is expected at the opening. As the name suggests, on exhibit will be a collection of signature crosses and wall-bound art sculptures done in wood, mother-of-pearl and other materials.

Hans Brumann was born in Switzerland to a baker’s family. He defied tradition when he chose a career in jewelry design, in Zurich, in 1957, as an apprentice. Formal schooling followed in Germany.

He came to the Philippines in 1967 to work at La Estrella del Norte, at that time the most prestigious luxury retail firm in the land. His search for excellence and inspiration made him realize that he could only truly flourish as an independent designer.

Thus he established Hans Brumann Inc. in 1976. A-List’s Cybill Gayatin and Kaye Sala informed us that Hans Brumann paid homage to other art forms by initiating collaborative exhibitions with prominent sculptures and painters. As they said:

“He fused mother-of-pearl with wood elements, transforming these into artworks using geometric styles. Being an expert goldsmith, stone setter and gemologist, Brumann used his skills as the handmaiden of his creative mind to produce minimalist yet classic pieces.”

Another grand exhibit of recent works in the abstract style was that of Jewelle Yeung, youngest child of Carlos and Mariquita Yeung. The opening was marked by a champagne reception at Gallery 856 at A.S. Fortuna Street in Mandaue City.

It gathered Cebu’s top drawer set, many of whom came early, the better to make their choices. The result was a sellout of large-size canvases which would need spacious living rooms or a hotel lobby.

Artist Jewelle was besieged by congratulations, most specially from her family, like elder sister Carla and her husband Chris McKowen, and brother Martin Yeung who came with his wife Claudia from Hong Kong where they are based.

Gallery 856 co-owner Jing Ramos was beside himself with the success of the show as was his pretty gallery manager, Pia Mercado. If this was a sellout, could there be some more of Jewelle’s works at her studio in Villa Mariquita?

“Yes, she has many more,” said dear family friend Flor Ynclino. But these are being readied for an exhibit Jewelle is planning in London. That’s where she studied, at the City and Guilds of London Art School, where she obtained a master’s degree in Fine Arts – Oil Painting.

Prior to her Cebu show, Jewelle had exhibited her works with due success in New York City and Hong Kong.

Cybill Gayatin and Kaye Luym Sala hosted one of the grandest celebrations to mark five years of their joint venture: A-List Events, PR and Advertising. It was held on the second level of Maya Mexican restaurant in Crossroads, Banilad area.

The turnout was fabulous, led by Cybill’s mom Arcy Gayatin; Kaye’s mom Elvira Luym, and husband Javi Sala with his parents Chelling and Susan Sala (he is the honorary consul of Sweden), sister Carinna Sala and cousin Camille Montenegro.