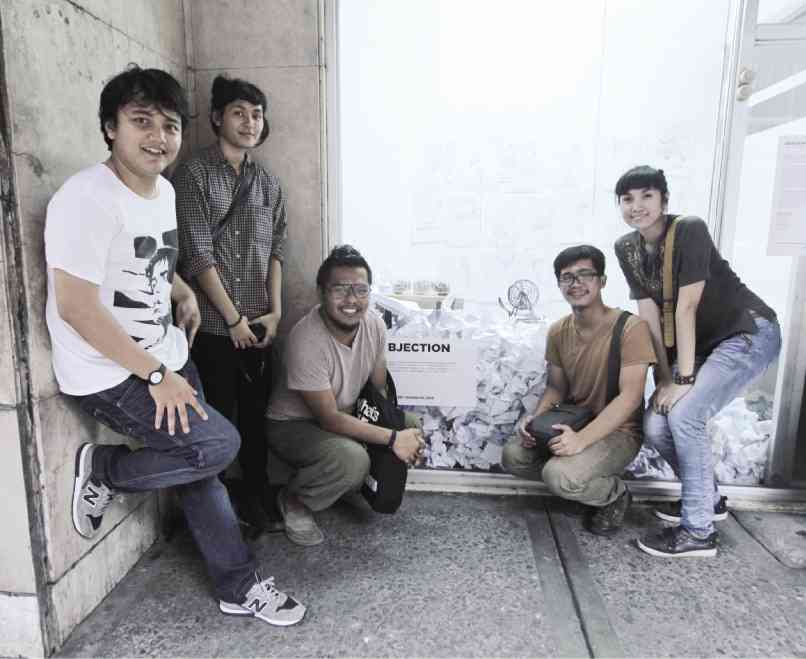 Young artists from four Southeast Asian countries take ordinary objects for an extraordinary artistic exploration in the exhibition “Objection,” until Oct. 14 at 98B Collaboratory’s Pan Project Space in Escolta, Manila.

“We thought about altering and removing the objects’ functions and asking about what they say about their consumers,” artist Joseph Gabriel says.

He says the exhibit tackles consumer attitudes and consumption patterns.

The artworks are displayed inside a glass case as if they were items for sale. People walking along Escolta Street in Manila can easily view the works.

The gallery is an alternative space created by 98B Collaboratory in partnership with Pan Pacific Industrial Sales Co., Inc.

Indonesian artist Asep Topan finds this exhibition space as something different but very fitting for “Objection.”

“I think the most interesting part in this exhibit is the space,” says Topan. “It is like a shop.

“The way of displaying our pieces gives a different approach in viewing the artworks.”

Terry Wee, from Singapore, who did his performance-installation inside the glass window, commends the art space because it fosters an unusual interaction between artist and audience.

Yee’s work, “Objectification,” uses job application forms and is a commentary on the bureaucratization of society.

During his performance art, he recalls what was happening outside the glass.

“I witnessed how the security guard chased a homeless child away from viewing my work,” Wee says. “Emotionally, I was affected. I witnessed how this sense of power is present in that sharp contrast of the class system.”

Wee says his work questions how a person becomes part of the application form when the applicant fills out the paper with personal information. He also uses a bingo cage in his performance to showcase the method of selection in today’s highly processed bureaucracy.

“How one decides what application to be rejected and selected in today’s highly processed bureaucracy sometimes makes me wonder how lucky and unlucky I can get,” Wee says.

Topan’s piece “I Prima Punta” is a collection of small pencils inside six glasses. These found objects were sharpened until they become short and useless. His work tackles the inferior quality of education in Indonesia.

“The idea of my work is education, one of the most important things in society,” Topan says. “The pencils represent the poor education given to people, which is not enough for society’s development of everyday living.”

Gabriel’s work “Branded” uses Lycra fabric stretched around shoes. He intended to make the items look generic to conceal its brand and style, to make one ponder on the items’ true purpose of covering and protecting the feet. The distinction between luxury and cheap shoes, according to him, tells a lot about the socioeconomic status of the people.

“I wanted to reflect on how items, regardless of their brand and packaging, exist for their basic functions,” Gabriel said.

Songpon Saiwipas from Thailand and Yang Jie from Singapore are also part of “Objection.”

Before the opening of the exhibit, Topan had an artist’s talk at 98B Collaboratory. He gave a brief presentation of his works and exhibitions in Indonesia and outside his country. He also talked about the practice of art in Jakarta and the similarities of his city and Manila.