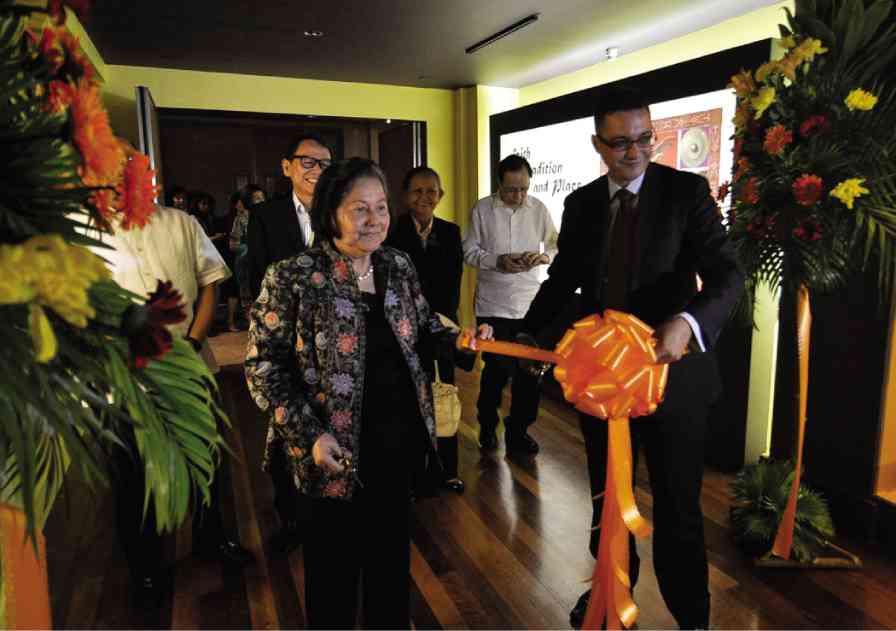 National Museum director Jeremy Barns was beside himself.

“Can you imagine, the Bangsamoro has a Pegasus!” he exclaimed, referring to the mythical horse in Greek mythology.

The director recalled seeing a similar winged horse in another museum in Singapore.

“But this one is more beautiful, really,” he noted while gazing at one horse with a human head that donned a crown.

In place of a torso is an elaborate shield. The horse’s wings have feathers that look like the tips of spears. It has a serpent for a tail.

Barns said the winged creature created by the Maranao in Lanao del Sur was just one of scores of other specimen of Bangsamoro art that had languished in the museum’s storage for years.

Although museum officials already have plans to organize its “stash” into a series of permanent exhibits, it took a gentle push from lawyer Salma Rasul, executive director of the Philippine Center for Islam and Democracy, for things to roll.

“We had been thinking of how to put collections out from Batanes to Tawi-Tawi when lawyer Salma said, ‘We’d really like you to have an exhibit of Bangsamoro art, artifacts and crafts’,” Barns recalled.

The director welcomed the idea. After all, it was “really in line of what we were thinking in general. Sige, unahin natin ’yong Islamic Filipino art because that’s really one of the most spectacular parts of our collection,” he added.

The Bangsamoro compendium is the museum’s fourth permanent exhibit. Earlier, it launched similar projects featuring indigenous textiles, ancient and traditional scripts and a third on rice.

Barns said the latest exhibit was relevant, more so now, given Malacañang’s efforts to thresh out a peace agreement in Mindanao.

“We’re very keen as an agency to converge with the efforts of the President, the peace agreement and in putting into place the conditions that would allow the Bangsamoro and southern Philippines to achieve their potential,” he explained.

“With all this wealth of ancestral art, history and tradition, this is one of those things where culture becomes relevant to our sense of self as Filipinos…” Barns told Inquirer Lifestyle.

Barns had a point. A careful perusal of the items on display makes one realize how the ancient Bangsamoro imbued daily life with a great degree of artistry and sensitivity, a far cry from how some of its members are portrayed in the news.

The buraq that Barns admired earlier is paired with another borrowed from the Henry W. Fernandez collection whose body, wings and tail are totally covered with ornate and sensuous carvings.

Barns also called attention to a Maranao kokora, a colorful sculpture of wood and metal that one literally rides like a four-legged creature while grating coconuts.

There is also a korsi that looks like an elaborate throne (with a sarimanok at front and center) where a kulintang player sits while entertaining royalty.

Even objects meant for domestic use are not spared from their makers’ creative spirit. The handle of a sabur or fishnet bears ancient Arabic calligraphy. A parasol of light fabric becomes heavy with an embellishment of sequins and beads.

Before nail art became a modern vanity, the ancient Tausug already donned janggay or nail extenders made of aluminum.

The star of the show however, is a copy of the Koran supposedly handwritten in the mid-19th century.

The story goes that the Koran originally owned by the Bayang family of Lanao del Sur was copied by Saidna, a hajj from Lake Lanao while on a respite in Palembang, Sumatra, after his pilgrimage to Mecca.

US soldiers allegedly seized the copy in 1902 and brought it to America where it was turned over to the Field Museum of Natural History in Chicago.

The copy was stored in the Department of Archives until 1966. It was returned to the Philippines in 1979 and was supposed to be delivered to the Mindanao State University in Marawi City a year later, but a typhoon forced a change of plans.

Meanwhile, then First Lady Imelda Marcos reportedly took an interest in the copy and it was transferred to Malacañang.

The book was “feared lost” after the 1986 Edsa uprising but Barns said the Presidential Museum eventually “made it available for public display.”

“I believe that there is much to learn from the Bangsamoro,” she stressed. “First is the richness of the Bangsamoro culture. Even the simple implements that the Bangsamoro use for their daily lives reflects this artistry…”

Sen. Rasul also noted that the Bangsamoro were the first to fight for the freedom of Filipinos.

“The Bangsamoro did not want to be colonized by any foreign power. It fought for the freedom of all Filipinos. When Magellan landed in Cebu, he was killed by Lapu-Lapu, a Bangsamoro,” she said.