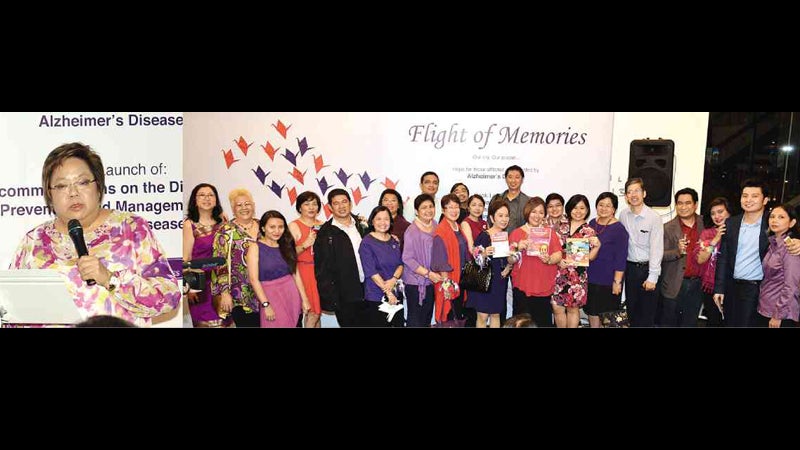 It’s not uncommon to hear ludicrous stories of “senior moments,” especially as one ages: The guy who went looking for his eyeglasses for three hours, only to discover it perched atop his head. A friend who, one rush-hour morning, forgot where her car keys were.

Is too much forgetfulness a normal part of aging? According to science, no. How about your failure to remember if you have taken your medicines after lunch—is that still normal? Certainly.

“That’s a problem with attention. You forget because at the time you were doing the act, you were not paying enough attention,” said Dr. Grace O. Orteza, neurologist and psychologist at The Medical City in Pasig City, in an interview.

Sometimes you may also experience problems in retrieval, she said, like storing a file in the computer but you can’t remember the filename. The file is there, all right, but its filename is “at the tip of your tongue.”

Inability to retrieve memory, while only temporary, happens when a specific memory is blocked by another similar memory. Say, you really want to talk about the movie “Marley & Me” but instead your brain spits out “Hachi: A Dog’s Tale.” This can be supremely frustrating, especially since the competing memory—in this case, “Hachi”—is usually so intrusive it’s the only one you can think of, no matter how hard you try.

The good news is, that’s normal, too. That’s not a symptom of Alzheimer’s Disease (AD) or dementia.

AD and dementia are two different things. Dementia is not a disease. It is a clinical presentation, or a group of symptoms that affects mental tasks such as memory. AD is one of the causes of dementia, and is responsible for up to 70 percent of all cases of dementia.

AD is a progressive, irreversible brain disease. It is a neurological disorder where the death of the brain cells destroys the memory and causes cognitive decline.

This eventually leads to impairment in doing the simplest everyday tasks. Its first symptoms appear after age 60.

“AD is a brain disorder. It is a disease. For example, it has a problem storing recent memory. Memory does not get stored at all. It goes from very mild and progresses to very severe.

“It is an illness that, unfortunately, people consider a normal part of aging.

“Given our culture we tend to take this matter lightly, like saying it’s a ‘senior moment,’” Orteza said.

Close to 500,000 Filipinos have AD today, up from the estimated 129,000 from 10 years ago. Since the Philippine population is aging, Orteza estimates that the number could reach a million in two years.

“Recommendations on the Diagnosis, Prevention and Management of Alzheimer’s Disease, Second Edition” contains recent findings in the past 10 years that confirm changes in the brain occur 10-20 years before AD symptoms become evident. That means a 65-year-old patient manifesting memory loss may have already shown early symptoms of the disease when he was in his 40s.

Like most diseases, AD is best treated when detected early. Orteza said the studies have shown AD to afflict people sporadically (99 percent). Hereditary AD presents itself earlier in life, though, manifesting when people are in their 30s or 40s.

The causes of AD are not yet fully understood. It is irreversible and has, to date, no known cure. But treating it early on may slow down or even prevent its progression.

But getting tested for early detection is not cheap. Among the reliable tests are the MRI, volumetric analysis of the hippocampus, the part of the brain involved in memory forming, storing and organizing (this part shrinks in patients with AD); a specialized memory test that can identify an underlying, serious memory problem; a PET scan, that looks into brain activity; and extraction of cerebrospinal fluid, where a sample will be sent and analyzed abroad.

Preventing AD from progressing need not be expensive, though.

Orteza said Filipinos must start incorporating a moderate, 20- to 30-minute daily exercise regimen into their lifestyle, and must start eating a healthy, preferably Mediterranean, diet rich in vegetables and fruits.

The book contains a modified version of the popular Mediterranean diet, with ingredients substituted with those readily available in the local market.

Orteza also recommends a regular cognitive stimulation. Practicing this mental exercise is based on the brain-reserve hypothesis, she said, that showed people with larger brains and more neurons may also have greater reserve.

To put it simply, when it comes to brain size, you either use it or lose it.

“If you have plenty of brain reserves, even if you get Alzheimer’s Disease, you won’t manifest memory problems because of the reserves,” she said.

The book lists nonpharmacological management of AD that includes techniques on how to best handle the disease, all scientifically studied and proven methods, Orteza said.

This is extremely important, she said, especially in this age of information overload, where many websites rely on anecdotal evidence instead of systematic scientific evaluations.

“This is a book that tells you what methods you can use because they work, and which ones to avoid because they don’t. We have parameters on what and what not to recommend,” Orteza said.

Techniques include music therapy, making the patient listen to music and talk about what she/he was doing when it topped the charts; and reminiscence therapy, showing patients old pictures so that they can talk about what they were doing at that time.

Medication for AD is not cheap, and once started patients must not stop or they will find themselves starting over again. That is why Orteza demands commitment from the families of her patients.

A patient prescribed with one medication will need to budget at least P6,000 a month for that pill. Most of the patients, because of late diagnosis, need three medicines to get by.

In the US, she said, healthcare for patients with dementia is projected to increase from $200 million in 2012 to $1.1 trillion in 2050. Without medication or treatment, AD can rapidly progress from mild to severe in one to five years.

“Recommendations on the Diagnosis, Prevention and Management of Alzheimer’s Disease, Second Edition” is a book for doctors and psychologists involved in the care of AD, but simplified to help non-doctors understand it, Orteza said.

It is available at Fully Booked branches. Also launched simultaneously is Adap’s “Caregiver Booklet,” a guide to people caring for individuals with AD and other related conditions. The comic book intended to create more awareness of AD, “Love Remembers,” launched in 2012, has also been reprinted.