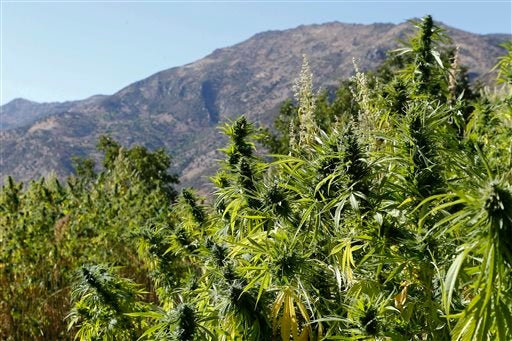 This Sept. 14, 2014 photo shows a view of swaths of cannabis near the village of Ketama in the Village of Bni Hmed in the Ketama Abdelghaya valley, northern Morocco. AP FILE PHOTO

KETTAMA, Morocco — Abdelkhalek Benabdallah strode among towering marijuana plants and checked the buds for the telltale spots of white, indicating they are ready for harvest.

By September much of the crop has been picked and left to dry on the roofs of the stone-and-wood huts that dot the Rif valley, the heart Morocco’s pot-growing region. Benabdallah openly grows the crop, despite the risk: “We are regularly subject to blackmail by the gendarmes,” he said as he scythed through stalks and wrapped them into a bundle.

Morocco’s marijuana farmers live in a strange limbo in which the brilliant green fields are largely left alone, while the growers face constant police harassment. A new draft law may bring some reprieve: It aims to legalize marijuana growing for medical and industrial uses, in a radical step for a Muslim nation that could alleviate poverty and social unrest. But it faces stiff opposition in this conservative country, as well as the suspicions of farmers themselves, who think politicians can do nothing to help them.

Morocco is joining many other countries, as well as some US states, in re-examining policies toward drugs and looking to some degree of legalization. But Morocco’s Islamic faith creates a strong taboo toward drugs, despite the centuries-old tradition of growing the plant in the north.

Morocco is one of the world’s top suppliers of hashish. The World Customs Authority reports that in 2013, 65 percent of hashish seized at customs worldwide came from Morocco, with most of that going to Europe.

Estimates vary wildly for how much the business is worth but legalization would certainly provide a substantial boost to farmers and to Morocco’s anemic economy, which will grow by just 2.5 percent this year.

But the farmers who cultivate the marijuana plants remain suspicious of any measures by politicians who they claim have never done anything for their poor, neglected region. They fear that legalization might depress the already low price of $8 a kilogram they receive.

“If legalization happened for all of Morocco, we could never compete with the other farmers that have lots of land and the price of cannabis wouldn’t be any different than that of carrots,” said Mohammed Benabdallah, an activist in the village of Oued Abdel Ghaya.

While customers pay top dollar for hashish and marijuana in the famed coffee shops of Amsterdam, the Moroccan farmers who produce it make on average just $3,000 to $4,000 a year.

Farmers also complain about having to dodge police and avoiding the major towns for fear of arrest — unless they are ready to pay bribes.

But there are few alternatives. The valley’s rocky soil is poor and the only crop that seems to thrive is marijuana. It was legal to grow under royal mandate in certain regions of the Rif until 1974, when the government passed a blanket ban on the cultivation and consumption of all drugs.

The security-centered approach to the problem has failed, argued Mehdi Bensaid, a lawmaker with the opposition Party of Authenticity and Modernity that has presented parliament with the legalization law.

“If Morocco has a crop that could produce these medicines that could be sold today in the US, Canada and France, it is an employment opportunity for citizens living in a miserable situation,” Bensaid told The Associated Press. “It’s a win-win, for the state, because there is tax, and for the citizens, because they are in an illegal situation.”

Mustapha Khalfi, Morocco’s government spokesman and communications minister, refused to discuss the proposed draft law when asked by The Associated Press, pointing only to government efforts to combat drug smuggling and reduce the amount of acreage under cultivation.

It remains to be seen if the law will be scheduled for a debate in parliament when the new session begins Oct. 10.

The government has repeatedly tried but failed to persuade farmers to substitute other crops. By 2010, most alternative crop programs had been suspended.

Walking along terraces of rocky earth, 63-year-old Mohammed Fathi said he tried to grow other crops, and was part of a cooperative that grew olives, figs and almonds. It failed due to lack of rain.

“Marijuana,” he said, “resists the drought that kills other plants.”