Boy Abunda: ‘I had nowhere to go but kneel’ | Lifestyle.INQ ❮ ❯ 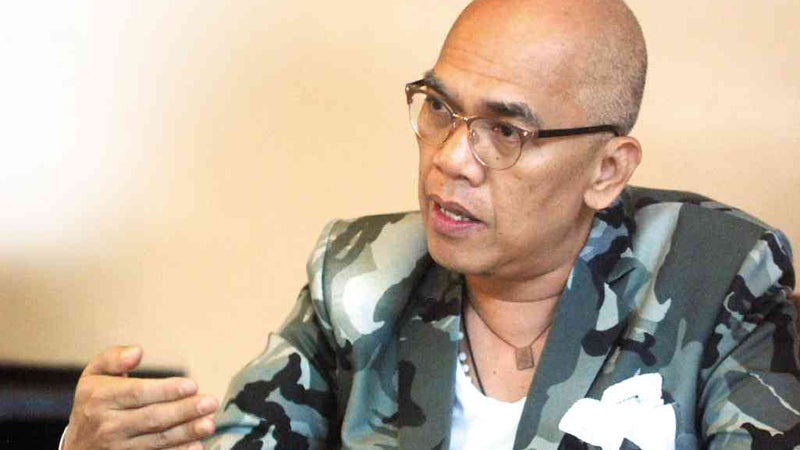 Boy Abunda: ‘I had nowhere to go but kneel’

“I hope it (the interview) happens, but if not, hindi na ako magpapakamatay (I will not kill myself,” he said in the emphatic manner that has become the Boy Abunda trademark way of talking, but with just the right dose of mirth and self-deprecation.

Last Monday, we sat down to late merienda. This was the day before his media launch as the latest endorser of Swiss watch brand TechnoMarine. He and Kris Aquino, the quintessential celebrity who is also his bosom friend, are currently the two faces of TechnoMarine—their images are already up on billboards and in the malls.

Last Monday was our first time in years to get together and chat—and all this because Abunda, the high-profile show-biz celeb and one of the foremost influencers of today’s media generation, is now on his second lease on life.

He has just survived a life-threatening ailment—about 300 ml of abscess was drained out of his liver.

This episode has been reported on adequately in media—and yet it is still met with public incredulity. It came as a big surprise; trying to understand its suddenness became even a bigger matter.

For while Abunda is old enough to be an institution, he is nonetheless too young to die.

Clinton came up in our talk as he was trying to explain his, in his words, “turnaround lifestyle.”

“In a way, I’m less hungry,” he said. “I’ve always wanted to be on top. The hunger continues. But for instance, Hillary Clinton—her office said we get back to her in the fall. The way I was before, I would have organized all the following up, tap my contacts…”

Apparently, staring death in the face has somewhat modified his priorities.

“I’ve learned to say no—to things I can’t do, in terms of time and needs.

“Medyo naging ‘OA’ (overacting) ako when it came to baka walang perang pagpapagamot sa Nanay ko… I’d been held hostage by that fear, that I may not be earning enough… Or that tomorrow, I might not have a job anymore.”

People know about how Abunda looks after his 85-year-old mother, Licerna, who is in the early stage of dementia. Abunda is also driven by the memory of his father, who died at a young 47.

That tragedy drove home to him and his sister, Fe, the misfortune of not being able to afford the medical costs of big hospitals. “I was so driven because ayoko nang maghirap (I don’t want to be poor).”

Yet trying to have the best life also led him to almost lose it.

He said, “When I was in the hospital, my biggest fear was for nanay to be the one to bury me”—instead of the other way around. In life’s cycle it is the child who buries the parent.

Obviously, his mom is the anchor in Abunda’s life. She was a teacher, then a councilor, and finally a vice mayor in the Abundas’ hometown of Borongan in Eastern Samar.

To explain Abunda’s long absence from home, when he was confined in the hospital for 16 days, his mother was told that he was on a trip abroad. (She lives with him.)

However, as soon as he got home from the hospital, his mother greeted him with a question: “Magaling ka na ba? (Are you well now?)”

Abunda lost 25 lb. And it shows. While his face isn’t gaunt, it looks thinner.

He was gone from television for five weeks.

Today, he still has that fear of getting sick again.

Before he was rushed to the hospital, he was running a 43.5 temperature and was almost delirious and had chills. His fever was on and off even weeks before that.

Delirious from fever, he was biting his lips and his tongue as he was being checked in the hospital. His face was, he recalled, “bloodied”—apparently the result of infection.

After a series of tests, the doctors zeroed in on the liver and the abscess. In the meantime, his close friend Gretchen Barretto, the beauty icon and show-biz celeb, was getting agitated waiting for the diagnosis.

“Ang sakit!” Abunda described what he was feeling while in the hospital.

“Even if you’re surrounded by friends and family,” he stressed, “there’s only you, your pain and your God… There are moments you talk to your body to do something, but it doesn’t follow.”

His days in the hospital, he said, “stripped him naked of his pride, his ego… lahat out the window.” He was in the grip of uncertainty.

And yet, he developed courage for whatever else his ailment could bring: “In your weakest moment, you also turn very brave. Like I faced whatever tests were to be done. Sige na…”

What caused his illness, even if his profile might not have been at high risk for liver diseases?

Abunda repeated what he told us earlier on the phone: “It’s really stress… ang araw ginagawa kong gabi. Having meetings after our late-evening show. I thought it was okay to go to bed at five in the morning for as long as you wake up at

(Curiously, his last hospitalization was 25 years ago.)

He also believes that “supplements” and “cleansing pills” did him in: “I’m the type who’d take pills friends recommended—like for cleansing, appetite suppressants.”

On top of these are what he calls “amoebic foods”—usually street food, which he’s fond of—which could have likewise triggered the infection.

Now, not only does he eat healthy, his lifestyle is also healthier—tucked in bed by 11 p.m.—and relatively slower than before.

His serious ailment also made him appreciate his true friends.

Gretchen would almost be on a stakeout at his hospital room, bringing food regularly, sometimes with daughter Dominique, even reminding her that it was time to deliver lunch to him, even if there was hospital food.

Kris “practically planned my life [on the hospital bed],” Abunda said—including the movies he could watch on his laptop to while away the time.

And Ai Ai de las Alas stormed the heavens with prayers, as did many of his friends.

I didn’t know that Ai Ai has close ties to nuns and priests.

But more than anything, his hospital confinement made him look into himself.

“I’ve always been ambitious. In the hospital, I asked myself, ‘what is it you want? When is enough enough?’

“I realized I just want to earn enough to provide for my family. Material [things] is still part of my life, but I’m not as defined by it as before.”

And he is not running for the Senate or any public office in 2016.

His priority now, as before, is to look after his mother.

Abunda, a product of the minor seminary before he went to Ateneo de Manila for college, is a Marian devotee.

Yet his illness led him to become even more spiritual. In the hospital, he clung to the crucifix, a gift from a friend.

“I had nowhere else to go but kneel,” he admitted.