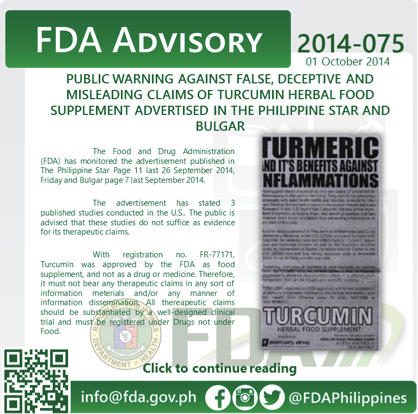 MANILA, Philippines–The Food and Drug Administration (FDA) on Tuesday warned the public against a turmeric-based herbal food supplement being promoted in newspaper and online advertisements as a remedy for all sorts of inflammation in the body.

The ad that appeared in some dailies late last month claimed that several studies in the United States have shown that curcumin, the active ingredient in turmeric or “luyang dilaw,” has properties that can improve blood circulation, which prevents inflammation in the body.

The product cited a study by Harvard Medical School and a report in the journal, Health Services Research.

It also referred to another study published in The Journal of Alternative and Complementary Medicine in the US five years ago, showing that turmeric has the capability of relieving pain and inflammations as ibuprofen.

The ad also said that consuming curcumin daily in moderate doses to a maximum of three months was safe, citing another study done by researchers from the Baylor University of Medical Center in the US in 2008.

But the FDA official said the published studies on turmeric are not sufficient evidence of the product’s therapeutic claims.

Distributed by Health Rich Pharma Corp., the product was approved by the FDA as food supplement, and not as drug or medicine, with registration number FR-77171, said Go.

“Therefore, it must not bear any therapeutic claims in any sort of information materials and/or any manner of information dissemination,” said the official.