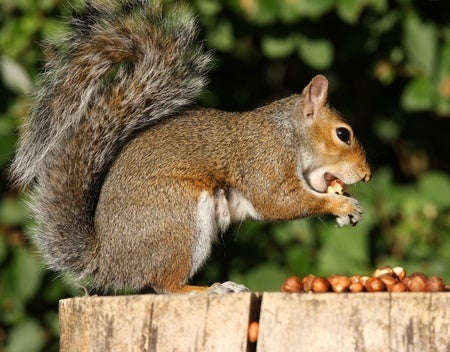 LONDON — Squirrels make a “good food source” and should be served up as a way of controlling the population, the organizer of a controversial squirrel burger cooking contest said on Tuesday.

Rachel Thomas staged the challenge at the Forest Showcase Food and Drink Festival in southwest England at the weekend, which proved a hit with punters but angered animal rights activists.

Competitors had a quarter of a pound (115 grams) of minced-up grey squirrel to work with — plus their imagination.

A “Cajun Melt” effort came first ahead of “Chicken of the Tree Surprise.”

“There was plenty to go round. Lots of people came and tried and they were very tasty and very positively received,” exhibit coordinator Rachel Thomas told AFP.

She described the taste as a combination of chicken and rabbit.

“If you eat meat, why not squirrel? Lambs, rabbits, they’re all cute animals so we don’t see what the fuss is all about,” Thomas said.

“They are, we think, a good food source. We decided, let’s get a bit of education out there, it’s about time they were managed properly.”

Instead of simply trapping and gassing them, “we should be actually using them for a food source instead.”

Introduced from North America from 1876 to 1929, grey squirrels are now thought to outnumber England’s native reds by 66 to one.

Squirrel meat is available in some shops and a few restaurants do serve up squirrel-based dishes but the consumption is minimal and remains very niche.

A spokesman for People for the Ethical Treatment of Animals said: “Our shops are brimming with healthy and delicious grains, pasta, beans, rice, nuts, fruits, almond milks and soya puddings.

“More and more Brits are realizing that these are not only far kinder choices but also far more nourishing than the dead bodies of squirrels, ponies or any other animal for that matter.”

Officials probing video of squirrel being kicked off Grand Canyon