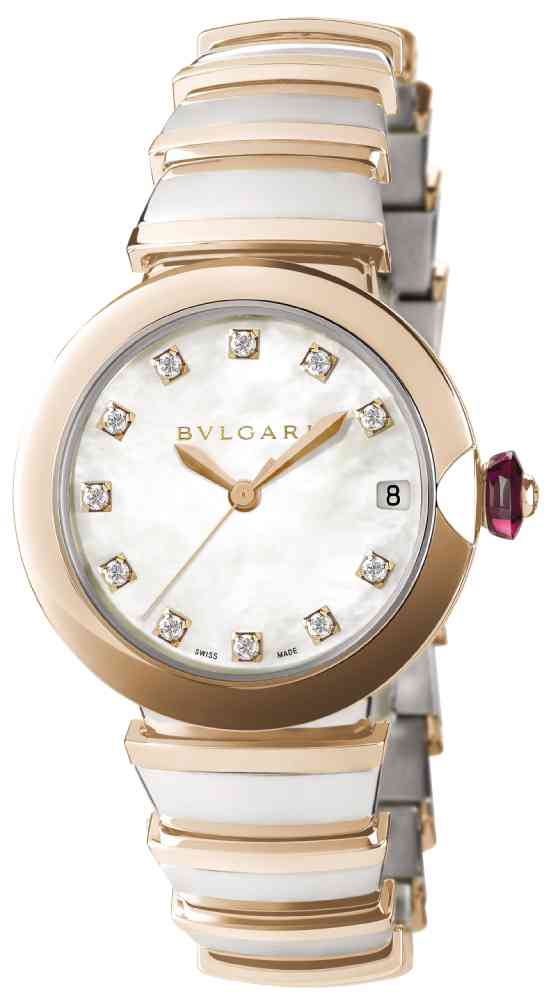 ONE of the 12 styles of Bulgari Lucea

No logo, but with jewelry elements–yes, it’s a Bulgari woman’s watch

Bulgari makes watches for women, but if you can believe it, the storied Italian jeweler “has never launched a ladies’ watch ever”—at least, not until it unveiled the one called Lucea recently, its first “mainstream” timepiece.

What Bulgari chief executive Jean-Christophe Babin meant by that assertion was that, the company has never created a non-logo-ed mainstream watch for women until it introduced Lucea (pronounced loo-chee-a) in Beijing last month, a collection of 12 styles for casual daily wear and sophisticated evenings out.

Bulgari, of course, has a popular line of women’s watches called Bulgari Bulgari, but Babin pointed out that it was a men’s watch line for decades since its creation in 1975 until a women’s style was introduced in the 1990s.

Another best-selling women’s watch line, the Serpenti, is “not exactly a daily mainstream watch,” and most versions are for dressier occasions and priced really high, Babin added.

“We wanted to create a watch born of women’s requirements complimentary to Bulgari Bulgari, meaning no logo, and using jewelry elements still identified with Bulgari,” thus the Serpenti bracelet of the Lucea, Babin said.

Guido Terreni, managing director of Bulgari Horlogerie, said his brief to the designer was to create a round watch without a logo that’s also iconic. Lucea is named for the Italian and

Terreni knew it would be a challenge to design the most conventional shape of a watch and also make it a standout. The goal was not just to make the bracelet nice but also comfortable to wear.

“It was a wonderful brief, but also scary,” he said.

The result was a collection of 12 potentially classic styles with very distinctive features: a Serpenti bracelet, for one, and a bold cabochon-cut pink stone as crown. They come in two sizes, 33 mm automatic and 28 mm quartz, from the entry-level steel case to the flagship model of rose-gold with diamonds.

A leather strap may come later, Terreni hinted, though Babin noted that Bulgari customers in tropical countries prefer steel as skins tend to wear out easily in high humidity.

The CEO also noted the comeback of gold—though less yellow and more rose, which is more understated and subtle.

The Lucea woman, she added, is contemporary and is able to navigate her multifaceted life. “Like Lucea, she is delicate and fragile, and yet also strong. You can be both.”

As a brand with a long heritage, Bulgari strives to stay relevant to the current customer, Belli said. “We have so much history—130 years—and elements of inspiration to use from our past, but also building on Roman history, we take from those and reinvent and rejuvenate, reinterpret in a more contemporary way, in a very relevant and fashionable way while staying true to what we stand for.”

Tracking trends in watchmaking is very complex, said Terreni, at the rate the world is moving. He noted how wealths have dramatically shifted toward Asia, and how this has influenced trends and the way businesses are run.

“[Remember] 10, 15 years ago when Japan was driving the world and the Japanese had a certain style,” Terreni noted. “Now China has its own identity. You have to make yourself be understood as an Italian brand, but also to match the taste that’s quite different. Evolution isn’t one trend but many, many trends that gets everything together. Whatever you do, it has to be true to your brand. If you do something tactical, you’re diluting your authenticity.”

A timepiece is an expression of style, Terreni said. People don’t purchase for mere functionality.

“It’s like buying a car,” he said. “If your point for a car is to take you from A to B, you won’t buy a Ferrari. You choose a watch to express your personality, taste and sophistication.”

The Lucea retails in euros from 3,500 to 30,000, with the steel version as its entry-level model. “It’s the declination of the material that makes it cost less, not the dilution of the sign,” Terreni said.

(The Lucea will be available in the Philippines in the coming weeks, at Bulgari in Greenbelt 4, Rustan’s Shangri-La, Resorts World Manila and Rustan’s Makati.)

Curiously, the Italian company chose the Chinese capital as venue of Lucea’s world debut, even as many luxury brands have reported slowed growth in China as the government is on a crackdown on conspicuous spending.

“There’s a temporary slowdown in this region,” Terreni conceded. “But those who purchase for themselves will still continue to purchase watches, so there’s continuous growth.”

Babin is equally optimistic. “The China growth rate has decreased but it’s still a big market, and looking at the Swiss export data, it’s not huge but we’re building on five years of double-digit growth. It’s a huge spike. We make good relative to pure watch players,” Babin said.

“Our market share versus the key players is very limited,” he added. “Whether the market is growing, single- or double-digit growth, or stable, for Bulgari there’s a huge potential for growth. It’s easier because our base is lower and our reputation is higher.

“We have a very modest market share. There’s no good or bad time.”