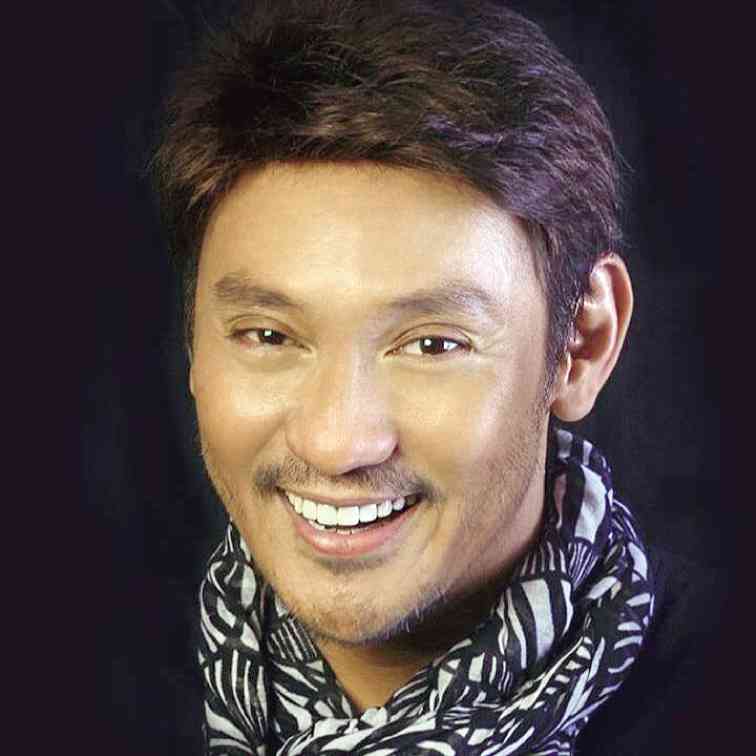 Roeder Camañag is the voice behind "Sana Naman," a superhit ballad in the 1990s. Now he acts and directs. INQUIRER file photo

On his 27th year as an actor, Roeder Camañag plays Apolinario Mabini

Mabini is one of the country’s national heroes. He was a revolutionary leader during Spanish colonial rule and was an advisor to the Emilio Aguinaldo-led revolutionary government, later serving as its prime minister. With the coming of the Americans, he was exiled to Guam by the US colonial government. He earned the sobriquet “Brains of the Revolution” and “Sublime Paralytic,” after having contracted polio just prior to the revolution against Spain.

DUP’s production, meant to commemorate Mabini’s birth sesquicentennial, chronicles the last days of his exile in Guam and explores the conditions that spurred him to return to his homeland.

The book is by Floy Quintos, with music by Krina Cayabyab, direction and choreography by Dexter Santos, set design by Ohm David, costume design by Darwin Desoacido and lighting design by John Batalla.

The songs were composed by Cayabyab for piano, cello, viola, and two violins.

“We wanted a musical that would reflect Mabini’s character, his introspection, his statesmanship,” says Quintos.

Camañag first prepared for the role by taking voice lessons with Pablo Molina.

“The music is difficult, so I needed to drill my vocal agility,” he says.

“I also read available materials about Mabini and his writings. I went to Mabini’s shrine just to get the feel of who he was and to trigger my imagination.

“And, of course, I had to lose weight,” he says, laughing.

“The play is difficult in the sense that there is very little physical action,” he adds. “Everything is internal, cerebral, if I may say, so it’s necessary to know where it is all coming from so that the lines and lyrics make sense.”

Quintos points out: “To the public mind, there are no great bravura moments, no dramatic battles or acts of extreme heroism that can be associated with Mabini. Hopefully, this musical reflects that very stoic and selfless character that has made Mabini the most underappreciated of our revolutionary heroes.”

Born and raised in Cavite City, Camañag had his first stage exposure as a child.

“My uncle was a member of Dulaang Kabataang Barangay and I appeared in one of their productions. It was a cameo role in the play ‘Gabun’ where I sang ‘Ugoy ng Duyan’.”

“After college, I was itching to sing professionally. After high school, I took a workshop at the Ryan Cayabyab Music Studio and I was discovered by Ernest Gonzaga during our recital. I had my first professional concert at Rumors Game Room in Makati. The title of the show was ‘Take One.’ I was 17.”

He eventually got a recording contract with Vicor and he cut several albums, earning gold and platinum record awards along the way.

“I’m on iTunes and Spotify,” he points out, laughing.

“At that time, Frannie Zamora was my stylist so I would always hang out at his place,” Camañag recalls. “He lived in Pasay City in a compound owned by the family of Chito Valenzuela. He and Chito were both connected with Gantimpala Theater. A lot of stage actors lived in that compound, like Roobak Valle, Ronnie Lazaro, Joey Nombres, Len Ag Santos. Nonie Buencamino and Shamaine Centenera were newly married then.

“There were many professional actors who would hang out there and throw lines. I would observe them and listen to their conversations. I would also watch their productions.

“My manager Rene Durian decided that I should take an acting workshop with Gantimpala. I was inspired by Nonie Buencamino when I saw him in Tanghalang Pilipino’s sarswela ‘Paglipas ng Dilim.’”

To teach and inspire

From there, he was cast in productions for other companies such as New Voice Company and Musical Theatre Philippines. He later joined Tanghalang Pilipino and became a member of its Actors Company from 2001-2003.

His first production for DUP was the lead role in “Elias at Salome.” He was also seen as Abdalap in “Orosman at Zafira.”

“One of my main goals now is to be able to inspire and teach young and aspiring actors,” he says.

He’s doing just that, as artistic director of Valenzuela City Center for the Performing Arts since 2006. The group provides its members free training in singing, dancing and acting, and produces musical productions that showcase their talents.

“Our artistic direction and thrust is focused mainly on developing productions that are not only entertaining but educational as well,” he says.

“Our productions are geared toward providing schools and students in all levels with innovative learning aids, positive awareness of the arts and creative experiences that elevate values and morals,” he adds.