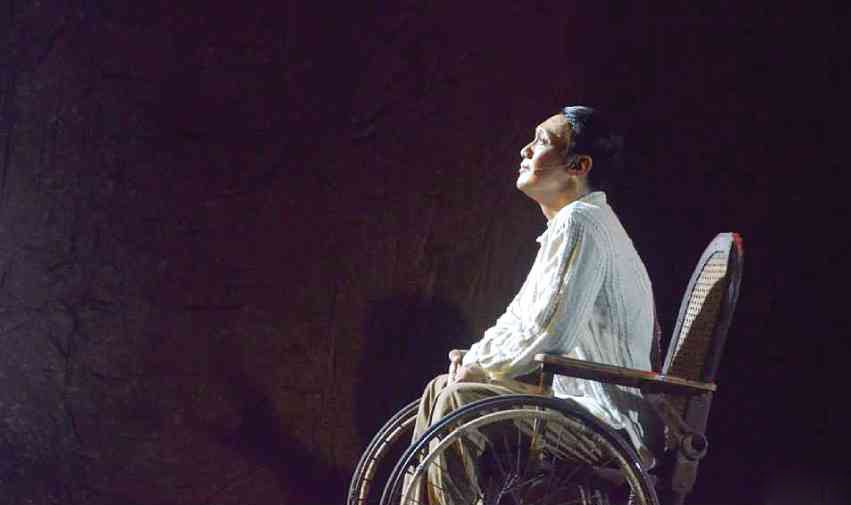 Dulaang UP’s latest offering, “Ang Huling Lagda ni Apolinario Mabini,” is a one-act reimagining of the titular national hero’s final days in exile in Guam and his conditional return to Manila, with book and lyrics by Floy Quintos and original music by Krina Cayabyab.

It is a tight-paced, economical production buoyed by a topnotch technical setup: set design by Ohm David, lights by John Batalla, period costumes by Darwin Desoacido and video design by Winter David. (The only antagonizing element to all these is the strangely infernal air-conditioning in UP Diliman’s Wilfrido Ma. Guerrero Theater, where this musical plays until Oct. 24.)

Yet there is reason to believe that a more appropriate title would be something along the lines of “Ang Huling Awit ni Artemio Ricarte,” not because the actor playing Mabini is a slouch (Roeder Camañag, who is marvelous), but because the one playing Ricarte, the political firebrand most famous for never taking the oath of allegiance to the American colonizers, virtually sets the stage ablaze and runs away with the show.

That would be Poppert Bernadas, who is only in his fifth musical production and is probably better known as a member of The Ryan Cayabyab Singers. You wouldn’t suspect his relative acting inexperience, however, from the way he summons the famed revolutionary to fiery, galvanizing life while belting the score’s oftentimes punishing notes to the rafters.

In fact, it would be no exaggeration to say that Bernadas’ interpretation of the role (Al Gatmaitan alternates) hews most closely to what feels like the intended vision of this production.

“Huling Lagda” is an ambitious opera trapped in the body of a small-scale musical. At a lean 95 minutes, it burns with dramatic urgency and almost always benefits from director Dexter Santos’ deft handle of heart-pounding, eardrum-bashing theatricality.

Note the qualifier, for the loudness and hyperbole that have become Santos’ signature don’t always work to his advantage. For example, his “Ang Nawalang Kapatid” earlier this year, a dance-o-rama based on the Indian epic “Mahabharata,” was a fever dream of somersaulting bodies and bone-breaking choreography. Meanwhile, his staging of “Maxie the Musicale” last year was weighed down by the amplified volume and the drawn-out, overindulgent execution.

In “Huling Lagda,” Santos finds himself confronted by a two-edged sword of his making. The show opens with the harmonizing voices of unseen men as images of archival material on the Filipino-American revolution flash on the walls of the cramped stage.

Minutes later, these men are spouting exposition like participants in an oratorical contest, complete with hand gestures, and one can only dazedly wonder, “Why is everyone shouting?” This is the manner of speech that would sustain the rest of the show, and woe to those who would be incapable of getting used to it.

Yet, it somehow makes sense that “Huling Lagda” should be shaped by this heightened sense of theatricality. After all, this is the story of exiles—men on the brink of madness, trapped in an island that vaguely resembles home, consumed by discordant thoughts of freedom from Western colonization and freedom from their isolating imprisonment.

It is this very kind of madness that Bernadas fleshes out quite stunningly. His Ricarte is no generic fighter, but a commanding, mesmerizing leader in the mold of Enjolras from “Les Miserables,” one fueled by the purest brand of nationalism.

This we glimpse quite early, in a number titled “Ang Maikling Kasaysayan ng Ating Himagsikan,” where Bernadas thrillingly leads the all-male ensemble in a satirical encapsulation of the country’s failed revolutions. Here, Santos’ talents as a choreographer take glorious flight, as the men engage in a storm of singing, stomping, and guitar-swinging, to exhilarating effect.

For all the noise and operatics, however, “Huling Lagda” is still very much rooted on cerebral ground. Its basic premise is a hero fighting not against physical arms, but against words—the oath of allegiance to America and the titular signature that would guarantee his freedom.

Quintos’ crisp storytelling divides the musical into two segments: the first, set in a beach in Guam, as the exiled revolutionaries receive news of Emilio Aguinaldo’s pledge of allegiance to the Americans; the second, aboard a ship in Manila Bay, where Mabini and Ricarte meet with General William Taft to discuss their release.

But this is not about the veneration of a hero; the success of “Huling Lagda” lies greatly in the fact that the dramatists have created a layered portrait of an ordinary, flawed person. Mabini is presented not as an icon, but as a character torn between home and country—a choice that need not involve politico-historical debate to matter to the audience.

The task of unraveling the person becomes only half as difficult, thanks to Camañag’s affecting turn as Mabini. One would be hard-pressed to find any semblance of the “brains of the revolution” in Camañag’s portrayal; what we see in this musical is not the mysterious hero, but a weary soul, tired from the fighting and betrayal, who only wants to go home and die in peace.

The emotional torment that haunts Camañag’s Mabini are all too visible in those questioning eyes, the agony echoed in his anguished singing. When he utters, “I’d rather be an irrelevant invalid,” one can only pity him.

There are no plain good or bad guys in this musical. Even the character of Taft (a terrific Leo Rialp in a stroke of genius casting) is granted shades: His biting refusal to refer to Ricarte as “General” is balanced out by his spoken, vaguely reverential admiration for Mabini as “the most dangerous man” of the revolution.

There is also the lone female character—the nurse Salud, who is pivotal in influencing Mabini’s decision regarding the oath. But the only genuinely interesting thing about her is that she has the singing voice of an angel, in the form of Banaue Miclat (alternating with Jean Judith Javier).

But to speak of Cayabyab’s music, it is almost like talking about an entirely separate life force.

There are just eight songs in this show, all set to live accompaniment every performance by the Manila String Quartet; but they indubitably mark a triumphant debut for Cayabyab.

The dissonance that marks the score seems straight out of the school of Stephen Sondheim. There are no sweet or hummable melodies here; everything serves a function in the weaving of a scene and the propulsion of narrative.

And for maximal impact, Santos has noticeably chosen to leave no room for applause after the numbers, preserving the brisk pacing of the production in an ever-growing bubble of unvented emotions on the part of the audience. It is little wonder that those of tremendously patriotic heart would find occasion for tears in some of Santos’ most dramatically staged scenes.

Consider, for example, the way he frames Mabini’s signing of the oath of allegiance: Right at the end of a haunting choral piece set to the hero’s “The True Decalogue,” Mabini signs the oath, a camera flashes, and the background changes to an actual newspaper headline proclaiming the hero’s submission to the Westerners, all done in a somber cloud of silence.

Or consider the moments that pit Camañag’s Mabini side by side with Bernadas’ Ricarte—two contrasting personalities, complicated, storied figures bellowing note after sublime note to the heavens—and the dynamic becomes as riveting as that of Jesus and Judas in Andrew Lloyd Webber’s “Jesus Christ Superstar.”

In such fleeting instances, “Huling Lagda” really achieves a kind of theatrical transmigration: a small-scale musical breaking free from its shell to assume the form of an opera—glorious singing, impassioned acting and all.