Jonathan Tadioan, all of 29, is playing the mighty part of Willy Loman, 63 | Lifestyle.INQ ❮ ❯ 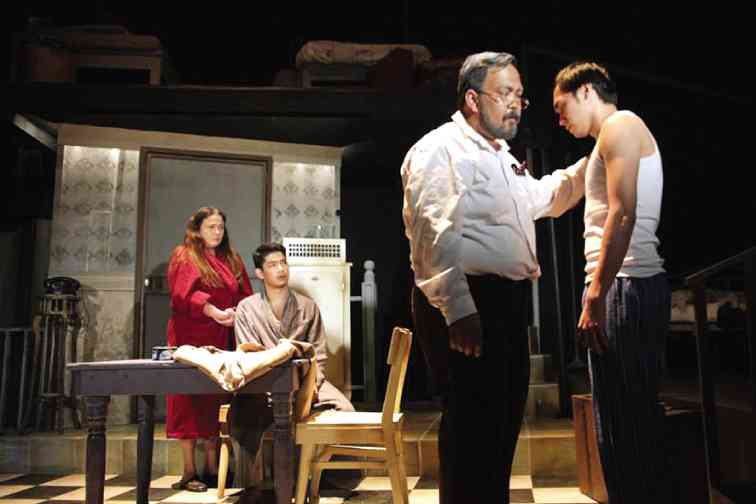 Jonathan Tadioan, all of 29, is playing the mighty part of Willy Loman, 63

The case of 29-year-old actor Jonathan Tadioan playing the role of 63-year-old Willy Loman in Tanghalang Pilipino’s production of “Pahimakas sa Isang Ahente”—Arthur Miller’s classic “Death of A Salesman” translated into Filipino by Rolando Tinio—can very well be the theater curiosity of the season.

The case of actors playing roles older (or younger) than themselves is nothing new. But when Tadioan learned who made the role famous, he realized he had extraordinary hard work to do to live up to the part.

For one, the play is all of 65 years old (it opened February 1949) but its inherent appeal to audiences worldwide has made it the No. 1 play in the last 100 years, according to an Entertainment Weekly survey last year.

Famous Willy Lomans include Oscar-winning actors Dustin Hoffman in a 1985 CBS television film, and Philip Seymour Hoffman in a 2012 Broadway revival. Hoffman was 44 at that time. Lee J. Cobb, the original Willy Loman, was 38 when he played the part.

In the Tanghalang Pilipino staging, Tadioan is the alternate of veteran actor Nanding Josef (66), who was about to play Happy Loman in a Philippine Educational Theater Association production of the same translation, with Vic Silayan doing Willy Loman, but was cancelled after several rehearsals at Philamlife Theater due to the untimely death of Silayan.

When the role was offered to Tadioan, he said he was shocked: “This is my dream role, but I never thought I would play the role this early in my career.”

When he began doing his research, he was awed by the roster of great actors who had played the part. But a class on script analysis at the Actors Company, where he is a member, allowed him some insights into the part.

“At first, I had big reservations about the role. My greatest fear is not doing justice to a character who is nearly twice my age. But to conquer my fear, I decided to focus on the character’s behavior, his attitude and mannerisms rather than his physical looks. What are the usual things in his mind? How does he feel all the time? I decided I will interpret him from the inside rather than from the outside.”

He also got help from director Chris Millado, who reminded him: “Just be part of the scene, don’t go physical and don’t act like a 60-year-old man.”

Comparing himself to them would be useless, he realized early on.

“For one, Tata Nanding (Josef) and I are different. He is much older than me, he has the depth of experience which I have yet to earn. It is understandable that he has a different interpretation and a different set of objectives. He’s giving Willy a more fragile attack, while I tend to be quite aggressive. But we had fun helping each other throw lines.”

Tadioan says he can relate to the character in more ways than one.

“I am also a dreamer. I have dreams that have yet to be realized, but there are a few ones now being fulfilled. Willy Loman is an explorer. Like him, I also want to explore more things in life.”

Tadioan may be relatively young but his theater resumé is already extensive. He is generally considered one of the best actors of his generation.

He garnered wide acclaim for “Doc Resureccion: Gagamutin Ang Bayan,” a Virgin Labfest entry for which he received his first nomination for Best Actor in a Play at the Philstage Gawad Buhay. He was also in Tony Perez’s “Nobyembre, Noong Akala Ko’y Mahal Kita,” and he played Shylock in TP’s “Der Kauffman,” a reimagining of Shakespeare’s “Merchant of Venice.”

All these, he says, are a big jump from acting in school plays (at Caloocan City High School) and doing parts at the FEU Theater Guild, before he was accepted as a member of TP’s Actors’ Company, where he is now its most senior member.

He has also appeared in TV and movies (“Babae Sa Septic Tank,” among others) and teaches in theater workshops.

“Film and TV assignments, including doing commercials yield better pay, so I grab every opportunity when offers come. But for now, I am happy being with Tanghalang Pilipino, as the stage offers me food for the soul.”