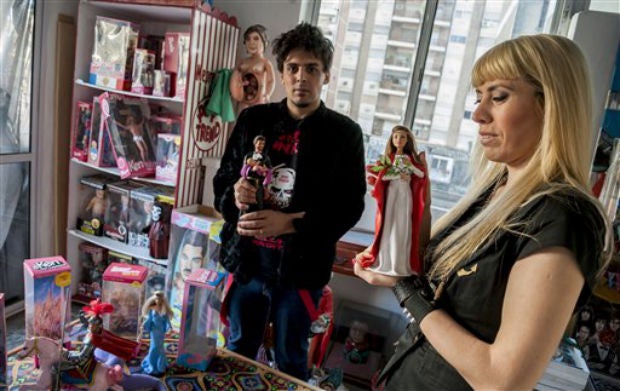 BUENOS AIRES, Argentina—Barbie has long been an icon, just not a holy one.

A provocative art exhibit featuring Barbie fashion dolls as religious figures such as the Virgin Mary and her boyfriend Ken as a crucified Jesus Christ has been cancelled amid complaints and threats by angry believers, the artists behind the collection said Friday.

The exhibit called “Barbie: The Plastic Religion,” by Emiliano Paolini and Marianela Perelli, had been scheduled to open Saturday at the POPA gallery in Buenos Aires. But the pair said they decided not to put on the show of pop surrealism or “lowbrow” art so as not to offend people.

The 33 pieces in the collection include Barbie dolls dressed as the Virgin of Guadalupe, patron saint of Mexico, and Joan of Arc, as well as a blue Kali, the extra-armed Hindu goddess of destruction. Along with Christ on the cross, Ken is also portrayed as Buddha, St. Sebastian and the Sacred Heart of Jesus.

“We have received threats from various parts of the world,” Paolini said by telephone. “It’s crazy … they have misinterpreted our work.”

He said he and Perelli chose the popular fashion doll for the project because “religion always represents Virgins with the most beautiful women; today the most beautiful woman is Barbie.” The prevailing concept of beauty is often reflected in portraits of the Virgin Mary, who was portrayed with a more robust figure in Michelangelo’s time, and a more stylized one during the Middle Ages, the artists said.

Paolini said they were baffled by the response, and insisted they themselves are religious: He has the word “Dios” — God — tattooed on his hand, and she wears a necklace featuring the image of the Virgin of Guadalupe.

“We have a sanctuary in the kitchen that has more saints than the Vatican,” Paolini said.