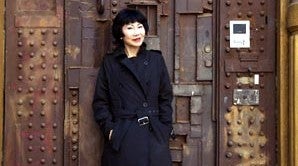 Devoted Filipino fans of worldwide best-selling novelist Amy Tan will have the chance of a lifetime to see her in person as she visits Manila in Raffles Makati and National Book Store’s first Philippine Literary Festival 2014 on Oct. 23-25 at Raffles Makati.

Tan is the author of the 1989 novel “The Joy Luck Club,” which has been translated into more than 30 languages and adapted into a motion picture by director Wayne Wang and starring Ming-Na Wen in 1993.

A daughter of Chinese immigrants, the 62-year-old Tan is also known for her reflection on the inevitable contrast between the Oriental and the Western worlds in other novels such as 1991’s “The Kitchen God’s Wife” and 2013’s “The Valley of Amazement.”

Also featured at the lit fest is award-winning Korean-American novelist Chang-Rae Lee, author of the novels “Native Speaker,” “Aloft” and “On Such a Full Sea.” He will be featured in the “Spotlight on Chang-Rae Lee” session and book signing on Oct. 25 at 9 a.m.

New York-based Filipino writer and multi-awarded author Eric Gamalinda will have a homecoming of sorts when he launches his latest novel, “The Descartes Highlands,” on Oct. 23 at 6 p.m.

There will be a series of panel discussions featuring top Philippine writers and publishers on a wide range of topics. Inquirer Super subsection editor Pam Pastor will be speaking at the “Writing Nonfiction” panel on Oct. 23 at 11 a.m.

The Philippine Literary Festival 2014 will be a great opportunity to explore the changing boundaries of writing from here and elsewhere. All the events are open to the public and will be held at the Raffles Makati. For a complete schedule and details of the event, visit www.philippineliteraryfestival.com. Ruel S. De Vera