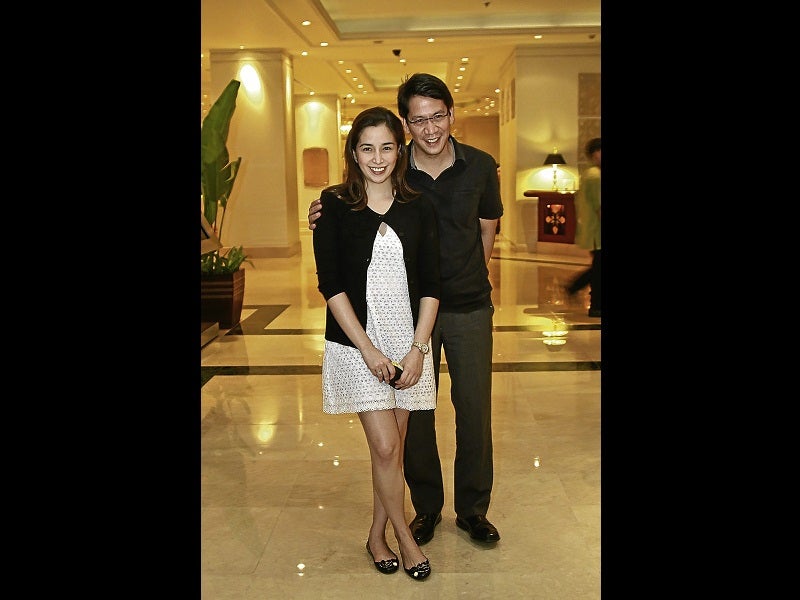 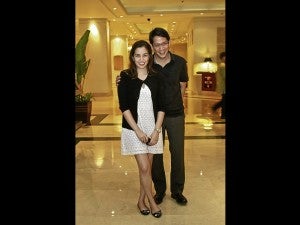 Shalani Soledad is blooming like we’ve never seen her bloom. She must really be in love.

We met up with her one late night about three weeks ago, a few days after her engagement to Pasig Representative Roman Romulo was announced by Romulo’s sister herself, Mons. At past 10 Shalani had just come from her TV show (“Will Time, Big Time”) but she didn’t look tired at all. She looked fresh and as beautiful as ever—in white eyelet summer dress with black cardigan, hardly any makeup (just lip gloss, if I remember right), and a headband on shoulder-length hair, which was much shorter than when we last saw her more than a year ago. That was another love era in her life.

We had a shoot then with her for the cover of Look, the two-year-old fashion/beauty glossy of Inquirer. That was to be her first ever cover. She had been picky, no matter that there was practically a media frenzy about her, sparked off by the news that this pretty Valenzuela councilor, whom the country never met, was the girlfriend of Noynoy Aquino, the man most likely to be president. She agreed to do the Look cover by photography icon Jun de Leon, she admitted to us now, also because Noynoy had given it his nod (with sufficient prodding from us).

Even to us used to beautiful and glamorous faces at shoots, Shalani’s beauty was striking even then. Her face had that allure, no matter what angle. Jun had a heyday snapping away. It was also then that we noted her sexy figure, although she asked us not to show her cleavage.

And she was game—since that was the Christmas rush, she took the MRT to avoid the traffic and make it to the shoot at Shangri-la Makati, with only her assistant.

We would have dinners after the Look stint—the magazine’s best-selling cover ever, by the way—and sometimes she’d have a gracious gesture for us, like a bouquet. At the onset, one saw that this young woman had superb people skills and that she would make a perfect politician or politician’s wife. First Lady material, one thought at that time.

But times have changed a bit. Today her greeting card is a personalized stationary with the heading “Roman and Shalani.”

As she sat down for our post-dinner chat, we didn’t really notice her diamond engagement ring. It was a few minutes into our conversation that we spotted it—a family heirloom from Roman’s mother, Lovely. Neither too big nor too small, it’s nothing flashy, just perfect for Shalani’s dainty finger.

Our icebreaker, of course, is always her “ex.” Yes, she said smiling, she was even a bit excited when she learned he (the President) was in the same airport (Dumaguete) as she was and that they would run into each other. After all, they hadn’t seen each other all this time. But the meeting turned out to be just a casual greeting, with the President telling her he’d hop on his plane ahead.

Why the whirlwind courtship with Roman, we asked. It is said that they’ve been together for only four months or so, after they met in an official function in Valenzuela where Rep. Romulo was guest and at a dinner not long after.

She didn’t really have a straight answer to that. She just gave a smile, and candidly said, “Actually we didn’t really go steady. We jumped from courtship to marriage proposal.”

“Manligaw ka muna,” she said she’d tell him. He did, even joining her on her visits to Quiapo church. Then one day in the Valenzuela church he popped the question—Will she marry him?

After a pause, she continued, “I’ve reached a point when I think I’m more confident. I can just be myself, not have to always conform.

“I have matured in the sense that I can be myself. More self-confident.”

It’s obvious that she feels secure with Roman, despite or perhaps because of their 13-year difference; she’s only 31, he’s 44.

Shalani said they can talk endlessly about their common interests—their political work, the movies and music.

Midway into our chat, Roman joined us. He looks fit and with those glasses, has that boy-next-door appeal. He’s quite amiable really, more into no-nonsense talk than small talk.

After nine years practicing law, he ran and won the congressional seat in Pasig. That, and having descended from an illustrious diplomatic clan (his grandfather was the statesman Carlos P. Romulo, and his father Alberto, the former foreign secretary) are all, it seems, the public knows about Roman, a low-key politician until his relationship with Shalani. In a Lifestyle feature two weeks ago, we also learned that Roman is a very good squash player.

“You’ll be surprised how much Shalani knows about governance and politics,” Roman said.

Oh, we’ve known that all along.

He said that what brings them together is their calling—politics and how to help their constituents.

His family didn’t drive him to politics; he was the one who wanted to run. He said he loves legislative work and working for the community.

Somewhere in the conversation, Shalani turned to Roman, smiling. “They’re asking if you have plans to run for higher office.”

He said neither yes nor no, just that he has still another term in Congress. Shalani herself has always planned to run for Congress.

Yes, the two were sweet; they would hold hands or intertwine their fingers intermittently.

She said Willie (Revillame) gave her “a handful of advice” when she told him of her marriage plan. Her dad, Adi Aguirre, of the real estate/banking clan, had his secretary call her after he heard it in the news. “I told him I was really gonna call him. It’s just the news beat me to it.”

She said their wedding is early next year; they just don’t know yet where and when.

The pair who has tied the knot apparently are Pia Guanio and her beau, Steve Mago. We ran into Pia last Tuesday at Lu restaurant at Rockwell, where she was dining with Steve and her stylist, Look’s Kat Cruz, and their friends.

It was a happy table and Pia was ebullient. She said she and Steve had just been united in marriage in Christian rites over the weekend, and that the official wedding will be next year. Pia wasn’t only abloom, she seemed ecstatic.

Long before she joined show biz, Pia had a career in magazine journalism. She was associate editor of an Internet magazine, and was contributing writer in Inquirer Lifestyle.

In Metro magazine, she was also our go-to swimsuit model for our summer shoots: She really had a drop-dead sexy figure to go with her writing skills.

No focus groups for Steve

The biggest irony about Steve Jobs—the icon who created and sold what must be the life-defining product of this century—is that the man didn’t believe in focus groups and market surveys.

This has been emphasized in Time cover stories and other articles about him. Business writer Eric Jackson wrote one lesson learned from Jobs: “To create a future you can’t do it through focus groups.”

Indeed what focus group could have told us about iPod, iPhone or iPad?

Jackson wrote on: “Jobs trusted himself more than others. Picasso and great artists have done that for centuries. Jobs was the first in business.”

If only marketers and corporate stiffs took time to learn from this college drop-out, big budgets would have been spent nurturing human creativity instead of paying the fat salaries of corporate executives who needed to initiate surveys/studies to justify their fat salaries in the first place.

Jobs believed in funding the imagination, not surveys.