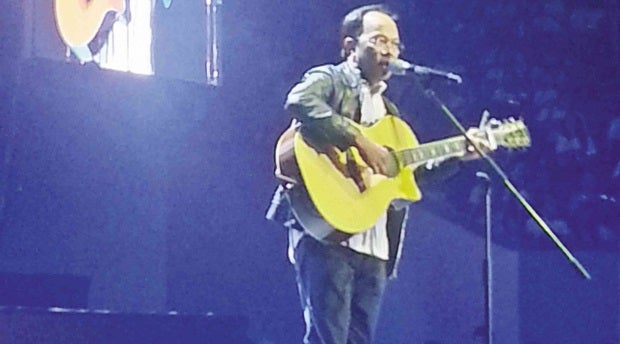 The teachers came from all over the country and were feted with a concert featuring various artists, plus raffle draws.

Gabay Guro has been very active these past few years. It has awarded 1,000 scholarship grants to aspiring teachers; enabled 300 scholars to graduate from 40 partner schools nationwide; launched with PLDT Hong Kong a scholarship program for Overseas Filipino Workers’ children and dependents; and donated classrooms to schools damaged by the 2013 earthquake and typhoon in Bohol and Leyte, respectively.

The concert had a “chopsuey” flavor in the sense that Side A and Noel Cabangon performed along with dancers, standup-singing comedians and lots of pop singers. For a few hours the comedians succeeded in making the audience laugh out loud to their corny jokes and the pop singers managed to sound entertaining in their minus-one numbers.

But in the end, it was the folk music sensibility of Cabangon that mattered most. His lone, diminutive figure onstage provided a stark contrast to the magnificent sound and sight of the teachers singing every line of “Kanlungan”—a bittersweet ode to the environment popular with activists which, ironically, gained massive fame when it was used as soundtrack to a McDonald’s TV commercial and later became a radio staple.

After the show, many of the teachers spent the rest of the night enjoying the leisure comforts of the mall.

Solaire Resort and Casino habitues and other gaming aficionados are expected to descend in droves to the hotel when the World Poker Tour (WPT) National Philippines is held there from Oct. 16-28.

Between 600 to 800 players are said to be joining the poker tournament’s main event.

Some $3 million is at stake.

Among the many Oktoberfest events scheduled this month, there are three we highly recommend to beer drinkers:

Check out the live gigs featuring Taken By Cars and Maude on Oct. 16; Steady Machine and Mayonnaise, Oct. 23; Jireh Calo and Julianne, Oct. 30.

The Beer Tent at the Eastwood Central Plaza opens on Oct. 24, 7 p.m. with live performances by Hilera, Sandwich, Pedicab and Pupil.

Performing are the original Hofbräuhaus Band from Munich and internationally acclaimed yodeller Lissie.

Although there will be German beer on those two nights, main sponsor is San Miguel Pale Pilsen draft.

Hip-hop artist apl.de.ap has been visible in Manila promoting BMBX (pronounced “boombox”), described as “a new Southeast Asian-based content and artist development and brand marketing company” which has been signing local and international artists.

Cheers to BMBX and Curve!