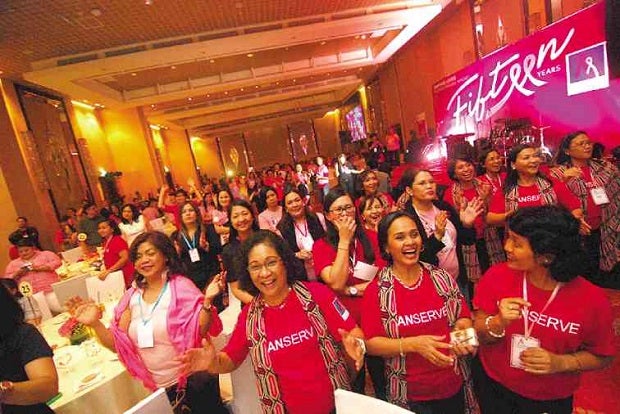 Breast cancer survivors? We know how to party

You know what they say about being on the outside looking in? That was how I used to report on breast cancer and one of its most well-known organizations of survivors, the nonstock, nonprofit ICanServe Foundation, Inc.

The group was founded in 1999 by journalist Kara Alikpala, along with Crisann Celdran, Becky Fuentes and Bet Lazatin.

The group’s reason for being then was to provide support for women who were newly diagnosed, who were being treated, and who were getting on with their lives after treatment. Survivors, they said, had to get used to a “new normal.”

I remember Kara, an old family friend and schoolmate, telling me that that she wouldn’t wish chemotherapy on her enemies. She was diagnosed 17 years ago, when the technology wasn’t quite so refined yet.

I also remember interviewing Crisann, who was diagnosed in 1999 at the very young age of 26.

“When we started out, I was fresh from diagnosis,” she recalled. “I wanted something simple: to meet people who had gone through cancer, who would ‘get it.’ We were four women in different stages in our own cancer journeys, but we all knew one thing: that no one should ever go through cancer feeling alone.”

I interviewed other survivors, and sympathetically took in what they told me. I assumed that new normal just meant getting on with life after you got better. Strictly speaking, of course, I didn’t “get it.”

And then, on June 7, 2013, I got it. ICanServe likes to mark day one of your diagnosis as the beginning of your survivorship. So, on that day, I became a breast cancer survivor.

I do not exaggerate when I say that, from diagnosis to choice of protocol to surgery to chemotherapy to radiation, I would have been lost without Kara. She answered all my questions and always calmed me down. Thrown into a panic when my first chemotherapy session was moved by one day—I was sure the 24-hour delay would kill me, hello—I got reassurance that delays are common, and no, they’re not fatal.

I remember losing sleep again over inflamed areas around my breast that stood out in my PET-CT scan.

“You know, your scans will always show little things like that—a suspicious area here, something growing there,” Kara said optimistically. “Masanay ka na diyan. And then, it will turn out to be nothing.”

She was also constantly reminding me, “You will really feel how God will spoil you now.”

Indeed, with gratitude levels multiplied, it did seem like cancer actually came with an onslaught of blessings. And from the first get-together of survivors I attended, some time after my second chemo and with my hair all gone, I realized it was a heightened awareness of life’s gifts that was shared by all survivors.

ICanServe does not consider itself a support group, but the kind of affirmation one gets from meeting women on the same journey, looking into their eyes and seeing how, profoundly and unmistakably, they “get it”—it’s enough to buoy one through the toughest of times.

I also remember ranting to Kara about how bad I felt for underprivileged or uninformed women who got diagnosed. Turns out that patient navigation, fundraising and information campaigns on early detection have been on ICanServe’s advocacy agenda for years.

There’s also the pioneering Ating Dibdibin, the community-based cancer screening program that teaches women how to spot symptoms early on. A medical team, along with survivors, gives free training to the community’s health frontliners, the barangay health workers, to disseminate information.

As current ICanServe president Tang Singson declared, “We want to save every wife, mother and daughter.”

That’s because the Philippines has the highest breast cancer incidence in Southeast Asia, and the ninth in the world; one in every 13 Filipino women will get the disease. If those stats don’t spur you to get yourself checked, I don’t know what will.

And so, as a survivor, I finally attended my first big ICanServe party, and it turned out to be an auspicious one—the organization’s 15th anniversary, held last Oct. 6, Monday, at the ballroom of the Raffles Makati. The hotel itself had launched its own “Raffles Goes Positively Pink” campaign for October, Breast Cancer Awareness Month, complete with a Pink Sunday Brunch, a pink macaron and a pink version of the Singapore Sling.

Outside the ballroom, it was chaos, and I mean that in a good way, as women in pink outfits or ICanServe T-shirts hugged, squealed and laughed as they registered; we were smiling at everyone, even people we didn’t know, as if telling each other, “Yup, I’m a sister. I know.”

Early birds even got to get their makeup done at a “Feel Good, Look Good” counter set up by sponsor Ever Bilena.

After a fabulous dinner (the Finger Raspberry Milk Chocolate with Vanilla Bean Sauce was particularly pretty), ICanServe spokesperson Bibeth Orteza anchored the program, which included the awarding of certificates of appreciation (with help from advocate Dawn Zulueta) to partner organizations, most noteworthy being the cities of Marikina, Panabo in Davao del Norte, Taguig and Muntinlupa, which have all institutionalized their Ating Dibdibin programs.

Marikina led the way in 2008 under then Mayor Marides Fernando, and the enthusiastic delegation was led by no less than Mayor Del de Guzman, who continued the program, and a bevy of barangay health workers who presented a funky dance number.

Not to be outdone in the dancing were the solid Cebu chapter—they’re set to attempt to get into the Guinness Book of World Records on Oct. 18, for the biggest human pink ribbon—and the Manila girls, who got people up front following the choreography.

Have I told you yet that breast cancer survivors are an emotional bunch? Just introducing the board of trustees and officers got many teary-eyed, as they probably realized how long the organization has been helping people—and how far they, as individuals, have also come.

“Our membership here was not by choice—we were thrust into it,” said Libet Virata in her speech. “We don’t want new members!”

“I had no idea my cancer journey would take me to this point,” Kara said, overjoyed. “And I am sure every cancer volunteer tonight feels the same. You never know how God will use you. I never prayed to be healed, just for the chance to be a mother.”

Well, Kara got that chance—Ariana, her daughter, born after she beat cancer, is now 14 years old.

And have I told you, as well, how survivors like to party? Entertainers included Ogie Alcasid, Music and Magic, the 8-Track Band, and a suki, Bituin Escalante, who got right into the thick of the dancing.

“Every year, we sing this song, hindi puedeng hindi kantahin,” she said before launching into an energetic “I Will Survive” by Gloria Gaynor that had every survivor in the room—every woman who has looked breast cancer in the eye, fought it or is still fighting—on her feet.

As one survivor’s mom said, “Isn’t the spirit wonderful? That’s because they’re all happy to be alive.”