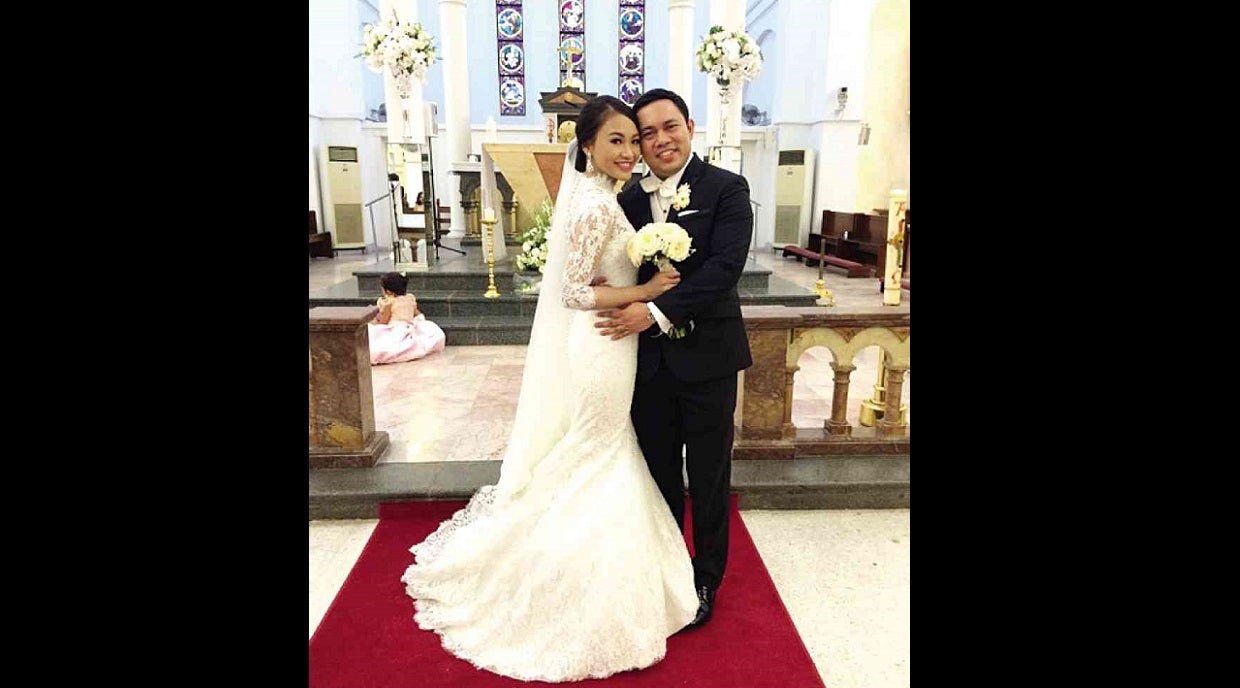 EM, wearing amodern Victorian-inspired lace wedding gown by Veluz Reyes, andMark during their Catholic wedding at the Church of St. Teresa in Singapore

They have yet to discuss the number of kids they plan to have, but their priority as a newly married couple is to immediately start a family.

After having a quiet civil marriage almost a month ago in Manila prior to their more recent, low-key Catholic wedding in Singapore on Oct. 1, Las Piñas Rep. Mark Villar and Diwa Rep. Emmeline Aglipay hosted a dinner reception for friends and political allies last Thursday at Fernbrook Gardens in Las Piñas.

“It’s our way of sharing our happiness with friends and constituents,” said Villar in a phone interview. “Our first priority as soon as we get back to work is to have a baby. Em and I haven’t talked about the actual number yet, but for me three children would be ideal.”

Thirty-six-year-old Villar, son of real estate mogul and former Sen. Manny Villar and Sen. Cynthia Villar, is the second of three children; while 32-year-old Aglipay, daughter of former Philippine National Police chief Edgar and Marinette Aglipay, is the youngest in a brood of four.

The groom declined to name names for fear of missing out on people who attended, but he noted that many of their friends from the Nacionalista Party were there.

The couple, through one of Sen. Villar’s staff, also sent their regrets to a select group of lifestyle journalists a day before the reception.

After initially inviting media, the couple, for some undisclosed reason, decided to limit the event to people they know. They promised to host a more intimate, post-reception dinner for journalists soon.

The 500-person, sit-down dinner party catered by Bizu was in stark contrast to their intimate wedding at the Church of St. Teresa in Singapore. Villar spent some time pursuing post-graduate studies in the city.

A fashion plate and favorite of photographers during high-profile and red-carpet events like President Aquino’s annual State of the Nation Address, the svelte Aglipay wore a Victorian-inspired serpentine number made of semi-beaded and embroidered lace by Veluz Reyes to her wedding in Singapore.

Villar looked dapper in a black-and-white tuxedo by Randy Ortiz.

“For our dinner reception last Thursday, I just grabbed one of my old barongs,” said Villar with chuckle. “But Em wore a long dress by Randy Ortiz.”

Ortiz made a body-hugging, fully sequined sleeveless column with see-through and partly embroidered semi-Sabrina neckline over a second heart-shaped neckline for Aglipay.

Made of silk gazar with a layer of guipure lace, the two-piece outfit’s top came with a Mandarin collar and three-quarter length sleeves.

“I’m happy at the way things have turned out,” said Villar. “I don’t feel any pressure because of our change in status. It wasn’t a whirlwind romance. Em and I got to know each other well before we decided to get married. I feel no added pressure.”