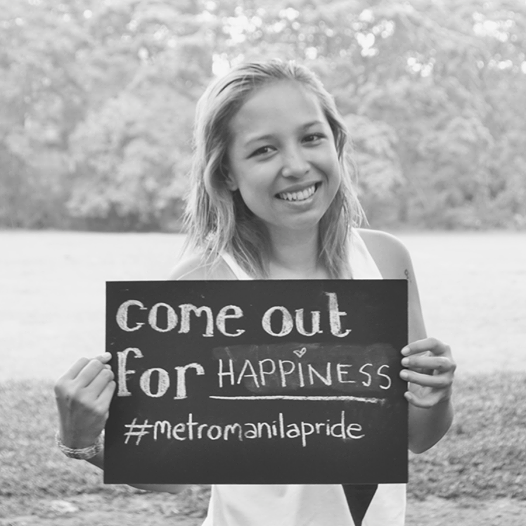 LGBT community comes out for love

MANILA, Philippines—Come out for happiness.

These were the words Cha Roque, a lesbian mom and video production professor, chose to convey her enthusiasm in a photo she submitted in support of the “Come Out for Love: Kasi Pag-ibig Pa Rin” campaign of this year’s Metro Manila Pride 20th anniversary celebration.

#ComeOutforLove is an interactive and person-centric campaign that aims to gather stories of support, acceptance and bravery both from the Lesbian, Gay, Bisexual, and Transgender (LGBT) sector as well as from members of the non-LGBT community.

Through the online photo campaign, participants were encouraged to share a photo and personal story on Facebook, Twitter or Instagram using the hashtag #ComeOutForLove, showing their message of what or for whom they are coming out, written in a piece of paper or illustration board.

In her story complementing the photo, which is also posted on the Metro Manila Pride Facebook page, Cha shared why she decided to take part in the campaign.

“I joined the campaign because I want the world to respect and recognize the love I share with my partner. I want the world to understand that even as a lesbian, I have the capability to raise a normal kid and have a happy family. I want to have the freedom to tell the world that I am a woman loving woman without being judged for it. I am a lesbian mom and I have no excuses, no apologies, no regrets.”

In an interview with INQUIRER.net, Cha said she’s always been active in advocacies and movements that are pro-LGBT. She’s been “out” to her family whose acceptance of her sexual orientation has been a big factor with her being comfortable in sharing her personal story.

“I am overwhelmed because I have seen the entries of parents of LGBT’s, the letters showing their support…like how I was overwhelmed with my mom agreeing to be a part of the a documentary I made for stories of ‘being me’. She said in the docu, ‘Of course, she’s my daughter, I’ll accept whatever makes her happy.’”

Kelsey, Cha’s 10 year-old daughter has always been accepting, for she has been exposed to the LGBT lifestyle. Cha shared how she was so touched when Kelsey expressed her desire to join the campaign.

Cha is teaching a video production course. In one conversation, Cha recounted that she asked her daughter the question “What if the faculty finds out I’m a lesbian, would they discriminate me?” to which Kelsey responded, “If they discriminate you, would you turn ‘straight’”?

When asked about her message to all the parents like her, Cha said: “My kid is very young. And if I get faced with the same situation that my kid comes out to me, I will accept her. I think it’s better if they’ll tell you that, rather than secretly live their lives and to pretend to be someone else when they’re with you. I want to support my kid if it is the lifestyle she wants. You love your kids unconditionally, that’s how it goes…it would be okay for me whoever they want to be with…but there should always be a guidance [from me] towards whatever path she will take.”

Speaking at the launch, TFP Partnerships Head Red Macalalad related that today, there are also pockets of other pride marches that are happening in the different parts of the country.

“This is a testimony of what coming out does for the community. It increases [the number of] people to have the courage to come out and to be comfortable about themselves in public,” he said. “The Pride Marches have been a very good venue for LGBTs to speak up and come out. You can hear so many stories of people saying ‘Nag-come out ako when I attended the Pride March. It is my public statement of who I am.’”

According to Macalalad, TFP has been aware of serious issues among LGBT community, which have lingered through the years. He noted there are still so many stories of violence and hate crimes, of people being discriminated at home, school or workplace.

Congress has yet to pass the anti-discrimination bill.

To date, there are already two out of 81 provinces and seven out of 1,637 cities and municipalities in the country that have anti-discrimination protection, according to the Philippine Statistical Agency.

Two weeks ago, the United Nations Human Rights Council (UNHRC) approved the landmark Sexual Orientation and Gender Identity (SOGI) resolution which seeks to uphold human rights issues, asses the current situation of SOGI around the world and identify good practices and initiatives to abate discrimination and violence against LGBTs worldwide.

Macalalad said, “If you look at the issues, what does it come down to? When we are trying to think about it, we look at where our people are situated, what is the context they are in. We have seen and encountered stories of LGBT people who say, when they try to grasp what the real issue is, it is essentially about love and the lack of,” he said.

“Come Out For Love” campaign, a reminder of the passion and love that started and sustained 20 years of taking to the streets, is given another face this year as it is set to ultimately engage the non-LGBT supporters or the “straight allies” to share their inspiring stories that has brought about significant impact on the lives of their loved ones.

“We realize that maybe, there are voices that we have yet to hear. The message is that we need additional voices to this movement. We would like to also highlight the voices of our heterosexual friends, heterosexual family, that they too can help us by also coming out as people who love us, people who care about us, people who are proud of us,” Macalalad said.

He said the issue of equality or the issue against discrimination has to be seen from different angles and points of view. This year what they would like to add and encourage are the perspectives of their heterosexual allies.

“If you believe in the same things that we do, if you believe that you are part of creating safe spaces for LGBTs and for everyone in general, then you are a part of this movement,” he concluded.

The Metro Manila Pride Season, the first in Asia, is a series of community-led activities that culminates in the annual Metro Manila Pride March to be held on December 6, 2014 at Malate Manila. A Pride Fest Street Fair will take place on the morning, where LGBT-owned, -themed, and -friendly businesses will be selling various merchandise and post-parade festivities will happen during the night.

Happening this November are: #ComeOutForLove Exhibit Launch where the selected stories and subjects from the online submissions will be featured alongside celebrity endorsers of the campaign in the photo exhibit shot and designed by noted photographer, Niccolo Cosme; the Metro Manila Pride All Families Day which is a fun and food day dedicated for all kinds of families; the Pride Speaks which is an afternoon of inspiring and powerful LGBT talks; and the Solidarity Soiree, a night that will recognize and celebrate some of the most hardworking LGBT activists.

Interested participants can log on to www. metromanilapride.com for more information and can register for the March at bit.ly/MMPMarchRegistration.

The celebration’s official online hashtags are #ComeOutForLove, #MetroManilaPride and #dec6.

This is no confession