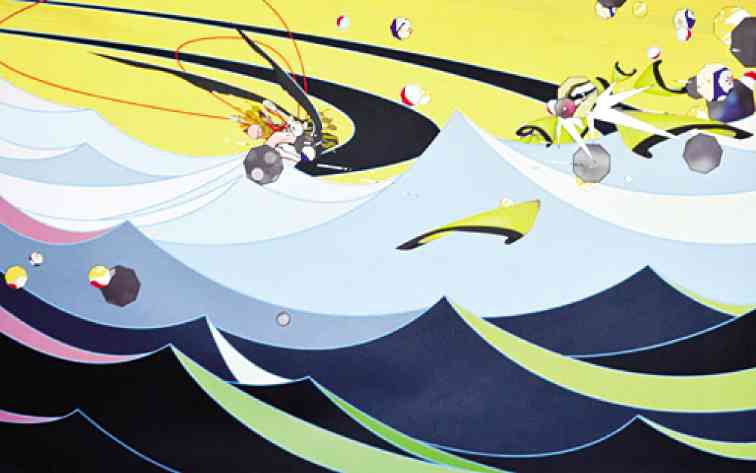 Artist Clarence Chun is a true child of the Pacific. Born in Tacloban, his early childhood memories revolve around escapades to the beaches of Leyte and Cebu.

Now based in Honolulu, Hawaii, Chun spends countless hours in the water studying its movements, listening to the many stories that swim within its depths.

In his new exhibit, “Leave Me Mesmerized, My Love,” Chun reacquaints us with the object of his affection in a fresh series of paintings that build upon an earlier award-winning collection which earned him acclaim in the United States.

In painting the ocean and its many seductions, he offers meaningful insights into the emotional significations of time and memory,   the dynamics of seeing and the tangible manifestations of affective experience.

Chun draws viewers in with a hint of mischief, naming his pieces as though fragments of lovers’ repartee, teasing us to eavesdrop with insatiable curiosity. The artist’s abstractions, however, are oceanscapes of infinite possibilities, with visual elements that are never fully figured and visual planes that assemble random images together like fractured dreams floating in the subconscious.

Whereas Chun’s seminal seascapes featured swirling waves that evoked idyllic moments, works in this new series like “But Oh My Love, Don’t You Even Know,” “My Friends, My Habits, My Family, They Mean So Much to Me,” and “When Eyes Can’t Look at You Any Other Way” depict choppy, restless currents that, although not ominously tempestuous, signify an exciting, highly charged volatile energy.

Curving lines pierce through these visual fields as though plotting the surgically precise yet invisible trajectory of a samurai’s sword.

Chun, who refers to his paintings as “conversation with bubbles,” scavenges remembered events, snippets of movie dialogue, truncated song lyrics and lost objects and assembles them in a patchwork of memories, fragments of time laid out like a puzzle with mismatched pieces.

Caught in bubbles, these fragments serve to highlight the singularity of moments, their fleeting nature, and the incessant velocity of our collective journey forward.

Solid, multilayered, horizontal lines that hurl geometric shapes in warp-speed, like those in “You’ve Become Ethereal to Everyone” and “Is That You in Front of Me,” intimate how time dissipates quickly, thereby rendering each experience a thing of the past almost instantly.

Time, when rendered visible and tangible, Chun also seems to suggest, is ultimately a matter of perception. Our memories are fallible and what we visualize as remembrances are nothing more than residues of the affect, feelings imagined as real.

Chun also deploys a wider palette in his new collection, taking inspiration from the refractive collision between water and light and its ensuing hues.

The author plays with the rhetoric of visuality as a subjective experience and poses his inquiry in two-dimensional form in works like “Could Be Blue, I Don’t Mind” and “Can’t Let You Roam Inside My Head.”

While Chun’s artistic discourse makes for deep, philosophical ruminations, his paintings are at the surface accessible, if not playful, works of art.

The artist paints with a distinctly graphic style that makes his paintings seem mechanically produced like billboards spewed from industrial grade-printers. His lines are always perfectly clean with no evidence of a single brushstroke.

Chun was born in 1975 in Tacloban City. At age 5, his family migrated to the United States.

He was chosen as Artist of Hawaii in 2013 and exhibited at the prestigious Hawaii Museum of Art. He also received the John Young Foundation award. In 2014, he represented the Philippines in the Korea International Art Fair held in Seoul, South Korea.

For feedback about this article, email the author at [email protected]