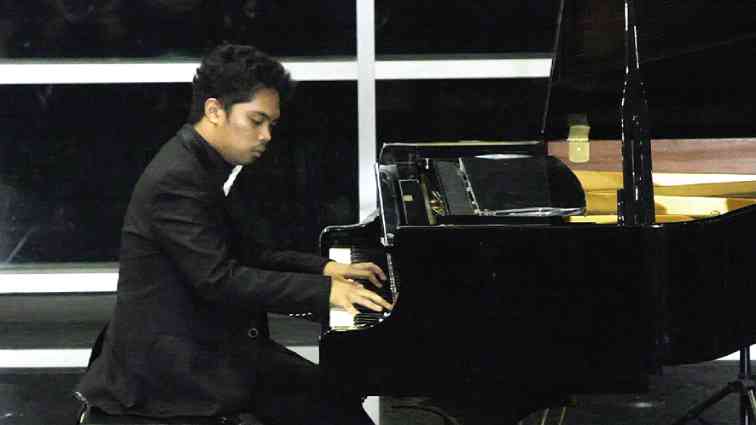 Most young pianists will escape the critical eye of even the stingiest critic. Let loose those virtuosic musical warhorses, with just the right amount of youthful bravado and impetuousness, and it’s easy to mistake a self-indulgent performer for a conscientious one.

At 20, Gabriel Allan Paguirigan proves that age is not directly proportional to maturity of playing, that musical intention, as long as it’s anchored on the music’s coherence as a work of art and not the pianist’s occasional sleight of hand, spells the difference between amateurs and professionals.

Paguirigan’s recital is the third concert in Manila Chamber Orcestra (MCO) Foundation’s 2014 Young Artists’ Series. He opens with Egon Petri’s transcription of the Bach aria, “Sheep may safely graze,” from the Hunt Cantata.

The fine, textural straightforwardness of Petri’s attempt to capture what’s essentially chamber in the original is thoughtfully highlighted in Paguirigan’s deft handling of musical lines. There are no murky affectations that one easily falls prey to, making any listener appreciate the natural lucidness of the piece.

The same thing can be said of his rendition of Chopin’s “Berceuse,” which, of course, typifies the sentiment or character one might expect to find in a cradle-song. Interpretive excesses in such musical contexts cloud the perspective of an otherwise solid execution. Even though there is anticipated dynamic intensification as one moves through the variations, Paguirigan exercises maximum control of spacing and volume.

His Haydn is elegant and characterized by a nuanced understanding of articulation and phrasing. His grasp of what a piece like the composer’s D Major Sonata (Hob. XVI:24) entails goes beyond mere finger work and conventional niceties. There is no doubt that he has the technical resources, so precision is hardly a problem and that demanding passage should be a breeze.

Musical maturity, though, for the most part, is more than just a notional idea of perfection. Imagination plays a crucial role in translating form and sound to actual music and this young pianist knows not only what the heart wants but also what the mind thinks.

His wide dynamic range can be gleaned from his versions of Brahms’ Op. 119, Custodio’s “Pauli-uli,” and, of course, Liszt’s B Minor Sonata. His crescendos are sweeping and the fortes robust but unstrained. There is none of that false lyricism in the slower parts, which are approached, most notably in the Liszt Sonata, with maturity of tone and sureness of melodic perception where direction and contour are concerned.

Admittedly, a number of memory lapses and similar mishaps may have distracted the audience. It’s easy to blame it on the Liszt but this is more an issue of foresight than a question of capability. The B Minor Sonata is, indeed, one Herculean work, but Paguirigan would have managed it without trouble if it weren’t a part of an unusually big program.

Nevertheless, not one of those accidents is enough to undermine the display of impeccable musicality in the Andante sostenuto, the cantando espressivo, or in any of the cantabile passages for that matter.

Another laudable facet of Paguirigan’s musicianship is its adaptability. The high regard given to musical style is evident in his readings.

He doesn’t resort to eccentricity, which in the case of young pianists, more often than not, is yet another unfortunate crutch for lack of vision. In this day and age, almost everyone prefers personality over virtue. But nothing gets old as quickly as mere personality without reflection.