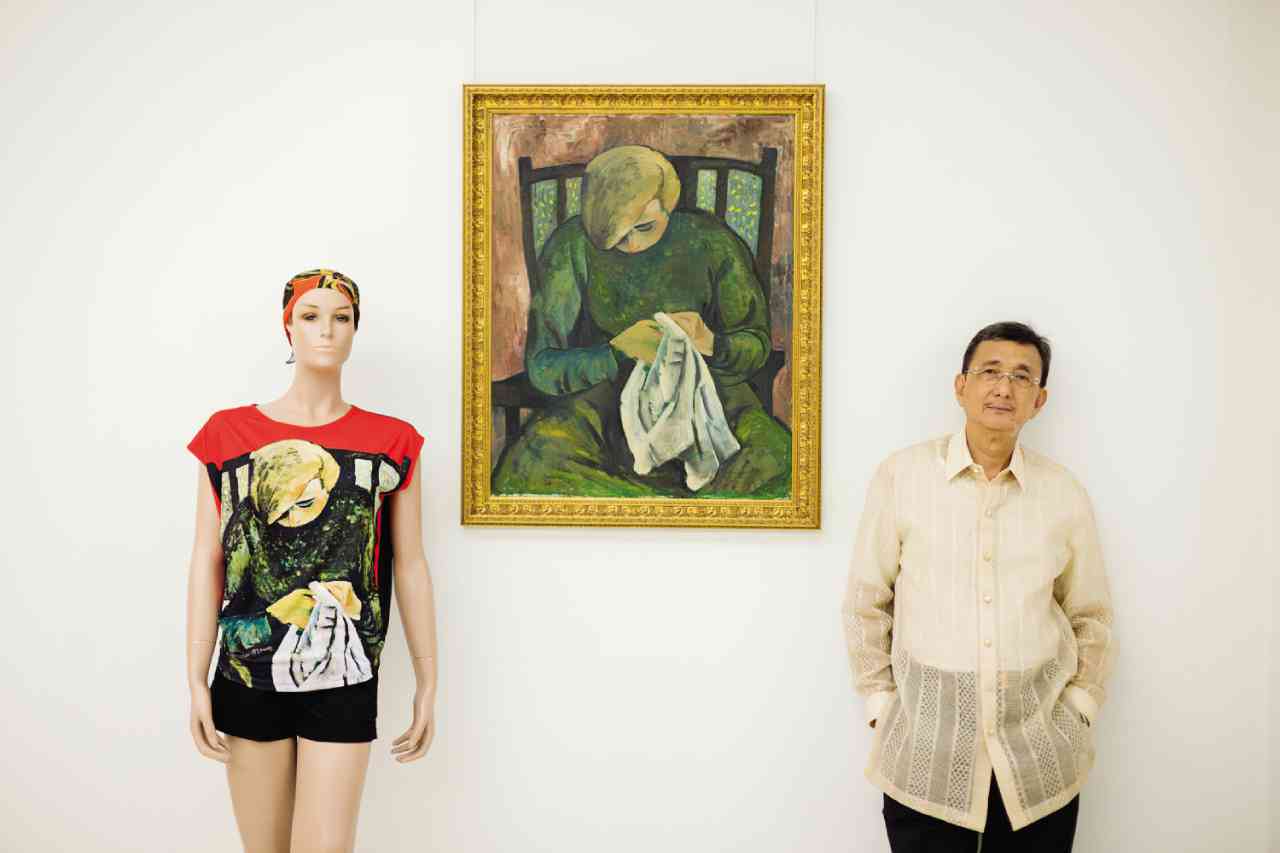 BUSINESSMAN and art collector Eddie Chua poses beside an Aguilar Alcuaz painting, one of hundreds in his collection. The image has been adapted to the fashion top worn by themannequin at left at the CrownPlas Museum which houses the Eddie and Norma Chua Collections.

Asked how his dad would have reacted now that he’s part of the National Artist Collection Series of trailblazing fashion house Freeway, Christian Aguilar said Federico Aguilar Alcuaz would have been amused and perhaps would have been baffled by all the attention. After all, he was a “no-fuss” guy.

But art critic Cid Reyes said Aguilar Alcuaz would have not really minded. He would have perhaps even checked the fashion merchandise and asked, “Which size would fit me?”

All the scenario-setting was of course pure speculative play as Federico Aguilar y Alcuaz had passed away in 2011, less than two years after being proclaimed National Artist for the Visual Arts by then President Gloria Macapagal-Arroyo. Because his proclamation was not consummated as a result of an injunction by the Supreme Court against his batch of honorees that included what many in the arts community deemed questionable choices (not Aguilar Alcuaz who had successfully passed the selection process), the artist died without receiving the honor that he so richly deserved.

Last June, after the injunction had been lifted, he was again proclaimed National Artist by President Aquino III. But once more the proclamation has not been consummated, since Malacañang, the National Commission for Culture and the Arts, and the Cultural Center of the Philippines have yet to set the proclamation ceremonies.

In fact, Francisco Feliciano, who was proclaimed new National Artist for Music, died last month without being formally given his National Artist medallion. But that’s another story.

Suffice it to say that in place of the national honor that was denied him when he was alive and still is, it seems, denied him posthumously, Freeway has given Aguilar Alcuaz a fashion tribute by including him in its National Artist Collection Series.

Aguilar Alcuaz is the 13th in the long-running fashion series that started in 2009 (ironically the year of his botched proclamation by GMA).

Sherrie Gotuaco of Elite Garments, the corporation behind Freeway, said that for the Aguilar Alcuaz line, Freeway sourced its images of the prodigious output of the artist from the collection of Eddie Chua.

The businessman and art connoisseur holds the biggest collection of Aguilar Alcuaz works in the Philippines, covering different phases of the latter’s art career from the 1950’s until his death three years ago.

Chua has housed his collection in the four-story CrownPlas Museum in Quezon City. He calls his collection of Aguilar Alcuaz works as well as other works by other Filipino artists and even Buddhist Orientalia and Eastern Christian icons as “The Eddie and Norma Chua Collections,” as a memorial to his late wife, who also became a friend of the National Artist.

Out of the generosity of Chua, it was on the first-floor exhibit hall of the museum where Freeway inaugurated its new National Artist Collection Series before a strictly invitational media audience that included veteran journalist Jullie Yap Daza, the champion of many an artist’s career, Inquirer Learning section editor Chelo Banal Formoso, and Coco Alcuaz of the ANC cable news channel. As it turned out, Coco is Aguilar Alcuaz’s nephew and he gamely interviewed Cid Reyes for highlights of the National Artist’s career.

For this one night, the highlight of course was how Aguilar Alcuaz’s art lent itself well to fashion and vice-versa. The two mediums were, pardon the pun, well-suited to each other.

It was Sherrie Gotuaco and her sister Kathy Qua and their Freeway design staff that chose which paintings to adapt to fashion and the task must have been difficult.

The sheer prodigious output of the artist and the wide variety of his ouevre covering nearly all of the genres of painting should have discouraged any easy selection.

The aesthetic constant of course is color. Aguilar Alcuaz’s penchant for lemon, for instance, means that almost always his canvases are filled with hues and variations along that color line. Lemon is to Alcuaz Aguilar what golden sun was to Amorsolo.

But true to his modernist roots, the artist’s lemon is not an exact rendering, a clinical verisimilitude, but an emotional tenor, a resonant sensibility. It is a highly personal color.

Art in fashion is not new, as Cid Reyes pointed out. Yves Saint Laurent’s Mondrian dress perhaps remains today the classic example of the perfect marriage between art and fashion: Mondrian’s color grid and geometry complementing perfectly the woman’s silhouette, enhancing her attributes as well as minimizing anatomical flaws.

But Reyes may be right in pointing out that because of his European training and sensibility, Aguilar Alcuaz, who maintained studios in Barcelona, Hannover and New York even when he was based in Manila, would be, among Filipino masters, the best qualified for fashion reinvention.

In the first place, Aguilar Alcuaz’s strongest suit, along with his fine sense of color, is composition. The particular strength lends well to fashion where line and silhouette are critical elements.

According to Freeway drumbeaters, the collection is “perfect for the holiday season (because it does) not fail to serve you with rich colored print dresses and tops that can be worn from day to night affairs, complete with tote bags for your functional trips.” The collection likewise uses comfortable fabrics such as satinized twills and poplins for casual work wear to stretch georgettes and knits for weekend get-up.

“Yes,” Freeway declares, “you can finally sport a work of Aguilar Alcuaz adding up to his vast exposure in 20 museums and major cultural institutions in the world today!”

To that, as Aguilar Alcuaz may say today, “Salud (Cheers)!”