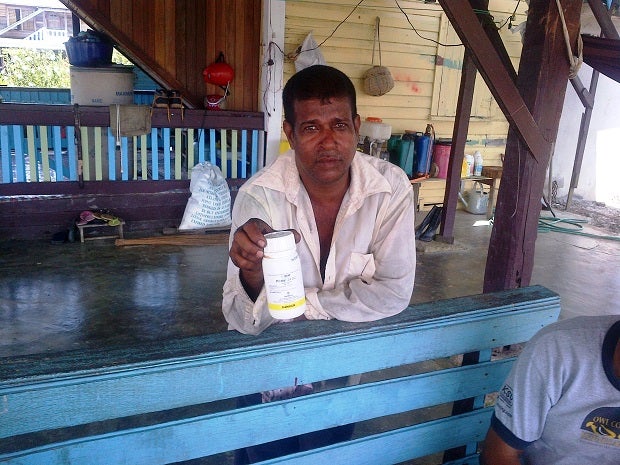 In this Monday, Oct. 6, 2014 photo, Vijai Ramlackhan holds a container of pesticide similar to the type his 17-year-old son used to commit suicide on their farm in the Berbice region of Guyana, a country that the World Health Organization says has the highest rate of suicide in the world. (AP Photo/Bert Wilkinson)

LESBEHOLDEN, Guyana — The young man responds all too easily when asked whether he knows anyone who has committed suicide in his village, a sleepy cluster of homes and rum shops surrounded by vast brown fields of rice awaiting harvest.

Less than a year ago, Omadat Ramlackhan recalls, his younger brother swallowed pesticide after a drunken argument with their father and died five days later. “I don’t know what got into him,” the 23-year-old said. “It just happened like that.”

It wasn’t the family’s first brush with suicide. His stepmother, Sharmilla Pooran, volunteers that her brother hanged himself and the man’s son tried to do the same but survived, with rope marks on his neck to remember it. She once contemplated killing herself.

The fact that self-inflicted harm is such a presence in the lives of this family is not surprising given that they live in an area that Guyana’s Ministry of Health has designated the “suicide belt,” in a country that the World Health Organization says in a new report has the highest rate of suicide in the world.

Guyana, a largely rural country at the northeastern edge of South America, has a suicide rate four times the global average, ahead of North Korea, South Korea, and Sri Lanka. Neighboring Suriname was the only other country from the Americas in the top 10.

There seem to be a number of reasons that Guyana tops the list, including deep rural poverty, alcohol abuse and easy access to deadly pesticides. It apparently has nothing to do with the mass cult suicide and murder of more than 900 people in 1978 at Jonestown, the event that made the country notorious.

“It’s not that we are a population that has this native propensity for suicide or something like that,” said Supriya Singh-Bodden, founder of the non-governmental Guyana Foundation. “We have been trying to live off the stigma of Jonestown, which had nothing to do with Guyana as such. It was a cult that came into our country and left a very dark mark.”

Just before the WHO published its report last month, the foundation cited rampant alcoholism as a major factor in its own study of the suicide phenomenon, which has been a subject of concern in Guyana for years. In 2010, the government announced it was training priests, teachers and police officers to help identify people at risk of killing themselves in Berbice, the remote farming region along the southeast border with Suriname where 17-year-old Ramdat Ramlackhan committed suicide after quarreling with his father, Vijai.

More recently, the government has sought to restrict access to deadly pesticides, though that is difficult in a country dependent on agriculture. In May, authorities announced a suicide-prevention hotline would be established and Health Minister Bheri Ramsarran said he would deploy additional nurses and social-service workers in response to the WHO report.

Some countries have had success with national strategies in bringing down the number of people who take their own lives, according to the WHO. The number of suicides rose rapidly in Japan in the late 1990s, but started to decrease in 2009 amid government prevention efforts and as discussion of the subject became less taboo.

It has declined in China and India as a result of urbanization and efforts to control the most common means of suicide, said Dr. Alan Berman, a senior adviser to the American Association of Suicidology and a contributor to the WHO report.

“A certain proportion of suicides are rather impulsive and if you can restrict access to the means of suicide, whether it’s by pesticides, or by firearms or by bridge, you can thwart the behavior and give people an opportunity to change their minds,” Berman said.

The WHO estimates there are more than 800,000 suicides around the world per year. Statistics on the subject are unreliable because in some places the practice is stigmatized, or illegal.

Most occur in Berbice, a flat, sun-baked expanse of farmlands along the river that forms the border with Suriname, where similar social and economic conditions prevail and which was 6th on the WHO list, just ahead of Mozambique.

Berbice has many people of Hindus of Indian descent and, as a result, suicide is often portrayed in Guyana as a largely Hindu phenomenon. But Singh-Bodden of the Guyana Foundation said that may be because self-inflicted death among the Hindus of Berbice is more likely to be reported as such. Their study, for example, found little reporting of suicide among native Amerindians who live in the country’s rugged interior.

“I don’t buy into the argument necessarily that it’s an ethnic thing, that Indo Guyanese are more susceptible to suicide,” she said. “There has been a lot of suicide among mixed people as well. I honestly believe it’s the hopelessness.”

Pooran, describing her family’s experiences, said her brother apparently killed himself after struggling with health problems for years and difficult home life. She said she thought about taking her own life while cleaning her house after a day’s work at a local sawmill.

“One day, I picked up the poison and thought about drinking it but I called God’s name and then realized my husband would just get another woman and soon forget me,” she said. “Don’t think I would do that today.”

One person commits suicide every 40 seconds: WHO

Suicides up in last 20 years in PH, mostly among young – NSO