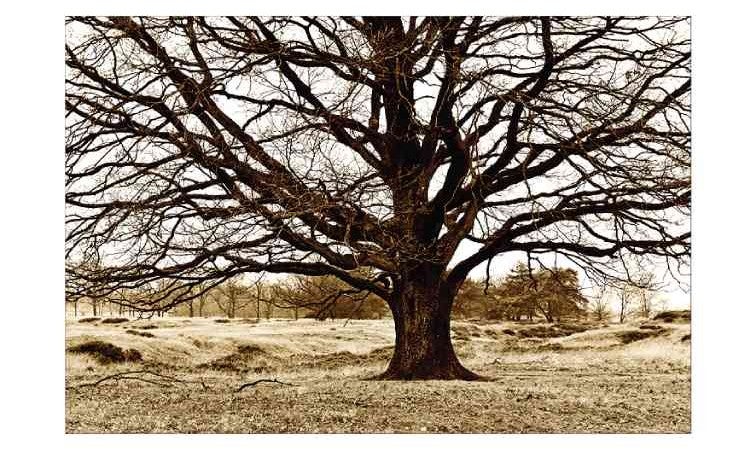 I think that I shall never see, a poem lovely as a tree…” Joyce Kilmer’s verse could easily be attributed to Alex van Hagen, whose romanced vision with trees would take him outdoors for hours, in any season, seeing them from a perspective only a nature lover could fathom, through the limited vision of his camera’s eye.

Bare trees in the cold are like skeletons that rattle in the winter breeze, or likened to an orchestra playing a symphony. Colors that play into the angular symmetry of twigs and branches define order in the eyes of Alex, who takes refuge from photographing the din of Manila society after so many years. Far from the madding crowd, the silence and grandeur of trees are, for him, eloquent solace.

He has his golden moments with his subjects in places that he seeks out, whether in his native Holland, or in his adoptive home, the Philippines. The select photographs he has chosen to exhibit cross boundaries of time and visas.

In these photos, subjects become one vision, which he opts to define so we see his trees through his eyes. While nature plays its role in deciding colors and movement of his subjects, Alex contextualizes them into his story. His trees bear witness to the calm and peace exuded by this loveable Dutchman.

On the other hand, Wynn Wynn Ong delights in imposing stories on her trees, non-sequitur as they may be, altering their natural, given states. There’s a tree upon which a hapless saint is martyred, and from its branches fall pearl tears of grief.

And just as the saint fearlessly defies death, so does the rhinoceros atop the glass dome, crowned by a black coral symbolizing the inner strength of both man and beast.

The base with chinoiserie designs is pure whimsy, suggesting a period where all styles come together at will, Victoriana.

Wynn Wynn’s domed objets d’art divert from her usual métier, jewelry. It is as though she takes respite from adorning the body to just releasing her inner thoughts and translating their functions into something to look at and think about. It is cerebral though whimsical, and certainly calculated.

The carved black wooden cornucopia stands as a base for playful monkeys atop an elephant, yet lurking on and around the protective glass dome are monkey-eating eagles. The danger is kept at bay, and you know whose side the designer is on. In the same token, mice frolicking under a glass dome are unmindful of the menacing stance of the cat on top. The whole ensemble sits on a gourd, the symbol of good luck.

More straightforward is her tribute to the strength and grace of the lady of the house—total chinoiserie, perhaps inspired by magical places like the Brighton Pavilion. A fragile egg sits above her head, yet underneath her are fiercely protective dragons. The intricately carved doors at the base open with red jaspers, a gilded hideaway for things precious to the lady.

Gilded boxes with stretching frogs and other bejeweled reptiles are “nothing” boxes until one defines their use, which, for Wynn Wynn, is the nonchalance of using luxury in the most mundane way.

She has not, however, forgotten where she started: adornment. Her earrings are now more intricate and balanced. Details are polished as they are fine, as seen in the gingko leaf earrings that smother the ear totally—the tense, intricately woven golden wires that fluff in a trimmed peacock’s feather, or the mabe pearls from which birds dangle. There, too, is the ticklish fun of sugar cube earrings pestered by golden ants.

Her bags could very well be parts of trees on which birds with flowing tails perch, and in one’s hands may seem like just another day to take a pet bird for a walk.

Far as she may have strayed from her original calling, Wynn Wynn sees the diversion in creating objets d’art as a new direction, a new energy that challenges her imagination to funnel them into various episodes and stories that have touched her. It is, as she says, “an accumulation of everything.”

When Alex invited Wynn Wynn to collaborate on this exhibit, no one would have known that two storylines would emerge from a single natural monument, a tree. This is the kind of exhibit that invites one to meditate on the whimsy and chew on its themes, sipping light wine, pretty much like one would do in a genteel drawing room. It is unhurried, it is something to languidly talk about; just put away the mobile phones.

While only God can make a tree, it took these two different sensibilities to weave stories around it.