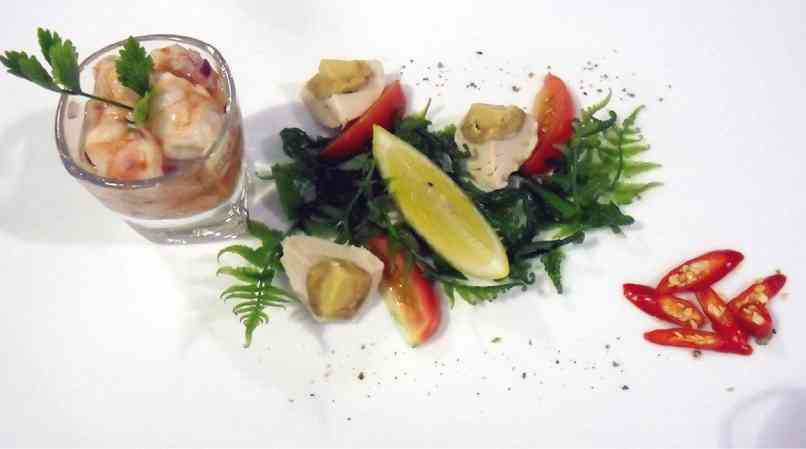 KINILAW for the drinker.

The more than three hours travel time to Lucena, capital city of Quezon province, is best done in a relaxed vertical position. Sleep is your friend as you pass roads and bridges traversing Sariaya, Quezon, or through San Pablo and Liliw, Laguna, and Lucban, Quezon.

Even with the challenge that long trip, I gladly accepted the invitation of Tina Decal to judge a culinary competition—curious about Lucena cuisine which isn’t as familiar to me as that of Lucban, Sariaya and Infanta.

Instead of dozing off on the road, however, we talked about native dishes, especially those in her home in Sariaya where Tina’s mother taught her the fine art of cooking.

Their version of sinigang is soured by dried kamias (bilimbi) but she calls it tuyo. And during pamamanhikan, when a suitor asks the family for the hand of their daughter in marriage, a chicken dish is cooked. Called delinong manok, the poultry is stuffed with rice mixed with cooked liver and gizzard, then boiled.

Learning about all these made me hungry once we reached Lucena before noon. Our first stop was lunch at the quiet but expansive Graceland Estates and Country Club.

Tina served as consultant at the club; she’s proud of how the place accepted her advice to serve Quezon cuisine. She advocates projecting the heritage of her province especially through food and conducts tours through different towns. She is currently president of the Tourism Organization of Quezon Province, Philippines, Inc. Its annual event is Quezonarya, a culinary festival where I was to judge.

Lunch, indeed, had Quezon food such as kulawo, pickled banana heart with grated coconut meat, roasted in charcoal for that heady, smoky-sour flavor. Tender beef was cooked in dilaw (turmeric) and coconut milk.

But there were also delicious shrimp sinigang, salad of greens with a bit of ubod (coconut pith) and dessert of moist chocolate cake shaped into balls. All of those were annotated by food and beverage consultant Rita Rodriguez Macalipay.

We wished we could stay on because the cool air and a view of the manmade lake were so relaxing, but duty called and so we proceeded to the job at hand.

In contrast to that peaceful ambience was the hustle and bustle of shoppers and the contestants’ preparation at the site in SM Lucena. We judged two competitions—home cooking by nonprofessionals and pulutan (appetizers for drinking) by professional cooks.

Reading through the recipes of home cooks was an introduction to ingredients and dishes of the region. For the pinais na hipon or steamed then broiled parcels of shrimps, wide

kamamba leaves were used as wrapper.

I had encountered those leaves in Infanta, where it’s called kalalauan, while Tina said it’s also known as kasopanggil elsewhere.

Some of the procedures were written in Tagalog; for blanching the ubod (coconut pith), the term is halbusan while the flavoring for that ubod cooked in coconut milk (guinataan) is sardines. I remembered how canned sardines is also used in a Leyte barrio noodle soup.

It was refreshing to read recipes in Tagalog, except for one that used culinary school terms though the two cooks were not graduates of culinary schools. Tina pointed out that the gabi stalk used in their dish is called paklang.

But what surprised me was how small their mustasa (mustard) leaves were and which they said they picked from their backyard.

The winning dish was tinuktok na gabi at hipon, yam and shrimp cooked in packets of yam leaves. One ingredient indicated “alangan na niyog” which is the Quezon term for that stage of the coconut between buko and niyog (young and mature).

Tinuktok is like the Bicol and Ilonggo pinangat and the Bicol term for that almost mature stage of coconut is lukadon.

The pros, as expected, all wrote in English, with the order of ingredients based on the order of procedures. Each pair of contestants was expected to dish out their pulutan for the lambanog, that lethal coconut or sometimes nipa palm alcoholic drink the province is famous for.

Tagay is a drinking custom that is very much a part of Quezon culture. Tina, in her tours, talks about the practices during such drinking bouts—for instance, the proper way to pass on drinks and the songs that sometimes accompany a welcome drink offered. Women and men are expected to know how to tagay because it’s a social act rather than a drunken binge.

The dishes were quite varied, some straying away from Quezon into scotch and deviled eggs or to the Visayan kinilaw (ceviche) and Mindanao sinuglaw (grilled pork mixed with fish ceviche). The winner added lambanog to his three dishes, one a spicy soup with mushrooms to supposedly cure drunkenness, crisp wonton cones filled with seasoned ground pork and a chicken chicharon topped with flavored tofu. Quite creative presentations and, best of all, tasty.

Our dinner was at Luisa and Daughter, restaurant of Carmen Campomanes Marasigan, where the fare is a mix of cuisines (Thai, Spanish, Filipino) but where Quezon specialties of tamales can also be had. Everyone recommended Marasigan’s sardines; it had that home-cooked delicious quality. Around the table were three past presidents of Tourism Organization of Quezon Province—Carmen Marasigan, Fely Canela Florido and Cynthia Suarez Eleazar.

Fely owns Rosarian Hotel and Salakot Restaurant in Gumaca (the chichanoy is the nickname of the chicharon that is said to be a favorite of the President) while Cynthia owns Halina Hotel, one of the oldest in Lucena.

We talked about food, of course, a great way to unwind after the day’s work. But for Tina, it was downtime at last after months of preparation and planning.

On the way home, I took my own advice and traveled in a vertical position.