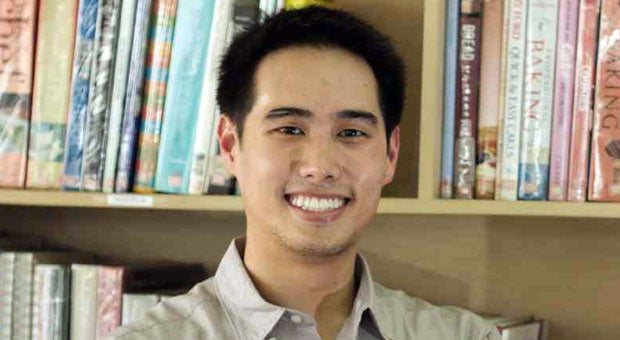 Luis Mercado is in no hurry to make it big in the food business. At 25, he knows how to pace himself, unlike more aggressive entrepreneurs.

Mercado is slowly but steadily making a name for himself in baking and for selling the tastiest, softest and smoothest mamon (Filipino sponge cake) in town.

He must also be the first to come up with the most number of mamon flavors on the market—butter, cheese, rocky road, peanut butter, dulce de leche and mocha.

Only two months into his business, Mercado has been getting a lot of positive feedback about his mamon, which has a nice buttery taste, soft but lightly dense, not too airy but satisfyingly filling. One can almost taste the eggs he used, infused generously with butter.

A bite into the butter cake and one instantly remembers the taste of Red Ribbon’s mamon. Why so? Because it comes from the original recipe by the matriarch Amalia Mercado, Luis’ grandmother, that made the bakeshop famous when it first opened in 1979.

The mamon recipe, which Amalia made by hand, has been passed on to the grandson, with the help of his father Romy, Amalia’s son. Luis Mercado has named his growing business venture Red Spatula.

“This whole mamon concept came from my parents,” says Mercado. “But when we were discussing it, I told them I wanted to be different from everyone else. So we came up with flavors to be extra unique.”

Coming up with six variants took a while. The Mercados started working on the recipes last January. When the products finally came out, they were an instant hit.

On the average, he sells over 1,000 mamon per weekend, which is already quite a lot for a starting business.

Following the heirloom family recipe, Mercado’s mamon is handmade. It is baked in a modest commissary in Quezon City, with two mixers, two large industrial cooling racks, and an industrial oven.

Now that demand is picking up, he is extending his commissary to accommodate additional commercial mixers and ovens.

The baking is done almost every day. A bestseller is the dulce de leche, which has a lovely caramel swirl on top. The rocky road has chocolate and marshmallow bits on top. Both peanut butter and rocky road flavors carry the initials MM—Mercado’s way of honoring his mom, Margie.

Mercado finished Business Management and Entrepreneurship at Loyola Marymount University in Los Angeles, California. He spent more than seven years in the US before coming

back to Manila to pursue his dream venture.

He wanted to be an entrepreneur like his dad Romy, who owns Kos (a Greek restaurant), Spam Jam and the culinary school First Gourmet Academy.

After college, Mercado first wanted to gain experience before setting up his business. He worked for retail chain Target in California as an assistant store manager for two and a half years. The stint, he said, helped him grow and learn to manage people, some of whom were older than he.

“I learned how to lead and motivate people and how to delegate. The only way to have people work for you is to have them respect you. And the tricky part of that was that I was only 20 then,” he recalls.

After working at Target, Mercado began running a busy restaurant, Chipotle Mexican Grill, in Delaware. Hired as a general manager at 22, his first task was to turn the business around since the restaurant was on the brink of closing down.

And he suceeded. He stayed at Chipotle for a year and a half before deciding to come home.

“I realized I was already veering away too much from what I was supposed to do,” he says. “I got so comfortable because it was good money. I forgot that all I needed from these companies was the experience to help me move into the food industry.”

Last year, Mercado had a serious talk with his father about his business plans. His dad was very clear in telling him that the best way to do things right was to go to school and to learn how to cook from scratch.

“I wanted a restaurant, but my dad reminded me to pace myself. It’s good to be aggressive, but it’s better to be smart-aggressive, where you make sure your tools are all ready to build and attack the market,” he says.

Mercado studied culinary arts for six months at First Gourmet Academy, and another three months as apprentice in a restaurant.

The idea of going into the mamon business was actually his dad’s, who has always thought of it as a good way to enter the food market.

“Honestly I was one of those who doubted it in the beginning,” Mercado admits. “When you hear mamon, it’s like small-time. How can you make mamon that sells for only P25 each a billion-peso idea? But my dad explained it to me well and made me buy into the idea. True enough, after a month and a half, our sales are exceeding my expectations.”

Mercado clarifies that his mamon business is not about riding on the legacy of Red Ribbon that his lola started, but more about starting his own game.

“It’s more of my dad helping me live my dream of creating something big,” he adds. “My dad is teaching me how to do things in a way where you start from small to big, instead of big to crumble.”

Still, some customers have easily connected the mamon to the original Red Ribbon product. Mercado has no problem with that.

“Red Ribbon is my lola. If I can continue and make it even bigger, why not?” he says.

As Red Spatula’s mamon continues to attract attention, Mercado is keeping himself focused.

“I’m not in a hurry,” he says. “I’m trying to pace myself and not get overly excited and overwhelmed. I’m trying to get there, one step at a time.”