Why music has been my ‘girlfriend’ | Inquirer Lifestyle ❮ ❯ 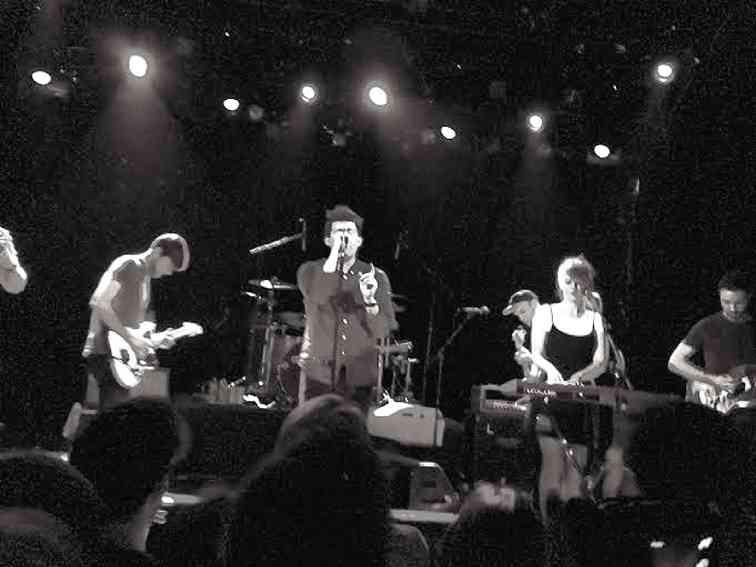 Why music has been my ‘girlfriend’

After many failed attempts at finding love, I decided to make music my girlfriend. She’s the best because she’s always available and adapts to my different moods.

The fun of having music as my “special someone” consists of collecting records, watching gigs, going to record signings and attending music festivals like Governor’s Ball and Coachella. I’ve met a number of incredible artists in the process and the encounters are experiences I will never forget.

Truth be told, I started listening to Los Campesinos! late last year only because I have a crush on someone who loves the band. When I first listened to its album “No Blues” (actually its fifth release), I liked it so much that I looked for the band’s other records.

One winter night last year, while doing household chores, I heard “You! Me! Dancing!” on Spotify and also found out that Los Campesinos! would be playing at Irving Plaza in January. I

I was so excited since it was the first gig I went to watch this year. As the band played, I found myself in an awesome pit of people bumping, jumping and singing to one another.

I heard songs from “No Blues,” as well as a nice selection from the band’s older records.

After the show, the band members went to the merch area and hung out with the fans. I got to chat with frontman Gareth Paisey who was such a sweet guy!

I met the other band members as well and they all signed on my record.

The experience set the mood for my 2014 music year.

Rough Trade, one of my favorite record stores in the city, happens to be near my workplace. I went there to see if the “Ultraviolence” album by the queen of my universe, Lana Del Rey, is available. It was not, but what made my visit worthwhile was that I saw posters and flyers announcing that Sam Smith would have a record signing that week.

My eyes widened as I rushed to get a copy of “In the Lonely Hour,” Smith’s new album that, incidentally had also been released that day in the US.

The album came with a wristband, which I held tightly like it was the golden ticket to the chocolate factory. I have to confess that I also have a crush on Smith.

I played the album when I got home; from all the tracks, “Make It To Me” stood out because of its lyrics:

“You’re the one designed for me

A distant stranger that I will complete

I know you’re out there we’re meant to be

So keep your head up and make it to me

Remember my other crush (the one who likes Los Campesinos!)? She’s someone I crossed paths with eight years ago in college but actually never met. My feelings resurfaced a couple of

years ago (I don’t know why) and I’ve been a distant admirer since.

Maybe this is also why I’m not really interested in dating—I’ve set a new life goal which is this girl. She lives on the other side of the world so I don’t really have an opportunity to meet her, but I’m working on making it happen.

The point was, as I listened to “Make It To Me,” the song’s lyrics jibed with my situation. I felt that me and my crush were meant to be.

The other songs I loved from Smith’s album were “Money on My Mind” and the stripped-down version of “Latch”—the former I could relate to, especially with my job. As for “Latch,” it was so heartfelt and beautifully sung it made me shed a tear.

Thursday came and I power-walked to Rough Trade to line up. Once inside, I saw that Smith was giving hugs to everybody.

I wished I wore perfume that day, although the organizers didn’t seem to allow people to take photos with Smith—just snapshots from afar. All I managed to take was a photo of him signing the record of the girls who were in front of me.

My turn came and we hugged. He smelled so good! I don’t really like guys in a romantic way, but I got kilig when I got shackled in his embrace.

I don’t know why, but I told him that I really like his name, which is the same as that of my girl crush. I also pointed out to him that I haven’t met my crush yet, and that is why I could relate to “Make It To Me.”

I said, “She’s the one designed for me, a distant stranger that I will complete… I really feel like we’re meant to be.” He smiled and said, “Awwwww.”

He handed me back my record and I got even more kilig when I saw the note he wrote on it: “I hope she makes it to you.” Sana lang talaga.

Early last year, I saw Tegan and Sara perform at the Beacon Theater. It made me happy because I’ve wanted to see them live for so long. It was a dream come true.

At age 24 I can say that I’m pretty good at realizing my dreams, no matter how crazy they are. I do every thing I have to do (without stepping on anyone) to get what I want.

One day in February, I was going through my Facebook feed and saw an announcement of Tegan and Sara’s “Let’s Make Things Physical” tour. I quickly went to the duo’s website to see when the presale was and found out that there were VIP meet-and-greet tickets available! I quickly noted it on my calendar and set my alarm.

Presale day arrived and I was really nervous while waiting for the clock to strike 10 (or maybe it was 12). I got two tickets and heard the “Hallelujah” chorus after I got the confirmation.

Fast-forward to June. I met up with my friend Bea at the Hammerstein Ballroom on the afternoon before the show for the sound check, which was part of the meet-and-greet package.

When we got in, I ran to the front and saw Tegan and Sara standing, smiling, looking super cute and badass with their leather jackets on. My heart, oh, my heart!

The duo asked the audience what song they wanted to hear during sound check. I raised my hand like Hermione Granger and suggested my favorite song, “All You Got” (from “This Business of Art,” 2000). Obviously it was super old and they didn’t sing it. But I was still kilig because. for a moment, they looked at me.

After sound check, we lined up beside a backdrop where all the photos would be taken. I thought, “What the hell am I going to say to Tegan and Sara?” I was so nervous and shaky when my turn came.

I approached them, they introduced themselves and hugged me. They hugged me! I’ve waited for this moment my whole life and, finally, we “made things physical.”

I don’t remember everything I said, except the one about having seen them twice at the Beacon last year and also at Pier 26 when they opened for Fun. I also told them how much I love their music and how it helped me through a lot of things.

I even mentioned the time I was lying in bed in the fetal position, crying my heart out while “Where Does the Good Go?” was playing on repeat because I was going through a breakup.

Tegan said, “I’m glad we were there for you during that time.” And she broke into that smile. I must’ve died at that instant.

I have favorite rings—the Mini Sharky Ring from the Arizaga Men’s collection. One day while at work, I was looking at my fingers and thought that the rings would look good on Tegan and Sara’s fingers.

So, I decided to give the rings to them as a gift at the meet and greet. I wore the rings on my fingers for the last time for 10 seconds before packing them in their boxes.

They said it was a sweet gift and hugged me again.

Then it was photo time! I took this opportunity to just go all-out in my fan-girling, so I made “chancing” and put my arms around their waists. Their arms were on my shoulders. Best Moment Ever. Tegan and Sara Sandwich.

After the meet and greet, we had to leave the venue and come back 15 minutes before the doors opened so we could have priority entrance. (The VIP tickets were so worth it!)

The show’s opening act was The Courtneys. I liked the “song about having a crush on someone who lives far away.”

Then came My Midnight Heart, whose lead singer told a very inspiring story: A year before, she was also at the Hammerstein working on a catering event (or something similar) and now she’s onstage singing. Dreams do come true!

When Tegan and Sara went on, guess what—Tegan wore the ring I gave her. I thought of it as a symbol of my love. I sang my heart out to every song they sang. I was smiling the whole

time. It was the best night ever! Another thing to cross off my bucket list!

If there is one thing I learned from all these encounters, it’s that anything is possible, and that the world works in mysterious ways to give you what you deserve.

Now all I wish for is a meet and greet with my girl crush. In the meantime, I’ll enjoy the company of my records.