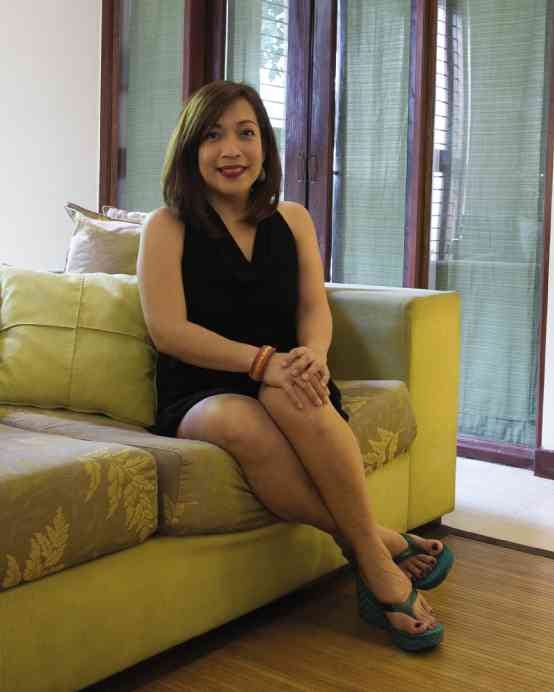 “THE MAIN goal [in theater] is to tell the story, to tell it good, honestly and clearly. Awards are just perks.” INQSnap this page (not just the logo) to view more photos! PHOTOS BY ALEXIS CORPUZ

Frances Makil-Ignacio–how her unique looks led to Medea at 27, and a restless actor’s life

A portion of Frances Makil-Ignacio’s dining table is covered in a psychedelic pool of loom bands, some near-spilling from what was supposed to be a cupcake stand.

“Instead of pub-crawling, I would rather work with my hands,” the theater, TV and film actress said, explaining how she had amassed the woven rubber-band bracelets she would either sell or, more often, give away.

Over the years Ignacio has had a string of hobbies, starting in 2003 with charms and semiprecious stones which she turned into fashion accessories.

The actress had downscaled her stage commitments at the time to work as marketing manager for the local franchise of a popular apparel brand. The move was an attempt to prove to her husband Jojo she could keep an office job and in the process help her young family acquire the normalcy an erratic show-biz schedule could not provide.

The corporate stint lasted only three years, but the hobby has branched out into other creative interests, which these days include cooking and photography.

The 43-year-old wife and mom has been improving her kitchen skills upon the influence of gay friends whom she said are very good home cooks. Her own repertoire consists of stews, sinaing na isda (steamed fish) as well as her teenage daughter Maxine’s favorite pasta dishes.

Ignacio is obviously a foodie, and her Instagram account shows many of her favorite good eats, her own dishes and their ingredients.

Last seen as the late-middle-age actress Dotty Otley in the riotous backstage satire “Noises Off,” Ignacio could now take pleasure in being a homebody and doing things at her desired pace.

She would watch reruns of TV series at home and spend time with her only child, with whom she goes to the cinemas for babaw (shallow but feel-good) movies and shares the love of food.

“Para akong semiretired, I’ll just wait when I have a call [for work],” said Ignacio who, on the day of our interview, was waiting for a call summoning her to the studios for her turn to tape scenes for a TV show.

She said getting two TV bookings a week was good enough for her, and that rehearsal logistics, such as distance and traffic, are her main considerations for accepting theater projects.

Ignacio has not always had the advantage of doing things at leisure.

It took more than 20 years for her to complete undergraduate studies (BA Theater Arts in University of the Philippines Diliman) “because life got in the way.” The realization that she would be in university at the same time as her daughter finally pushed her to finish the degree.

Ignacio was 22 when Maxine was born; it had been a year after she got married to her husband, who worked as a banker at the time. The young couple struggled with limited funds while raising a baby, so Ignacio stopped schooling on her last semester, shuttling instead from one theater to another as she took in all the acting gigs available.

To augment her measly income, she dubbed telenovelas and cartoons such as “Ragnarok” and “Heidi.”

“It’s so erratic,” Ignacio said of the working actor’s life. “I’m only as good as my last project, but that’s the harsh truth.”

The actress recalled how her husband would see her panic when she didn’t have money to bring home for lack of acting or dubbing gigs.

“I’ve got to give it to my husband who is not from the arts,” said Ignacio who calls herself “Drugstore Queen” in jest, referring to the two Generics Pharmacy branches she now manages. The drugstores were put up by her husband so she could continue in the acting profession without worrying so much about the family’s finances.

It turned out Ignacio’s father, the late baritone and music professor Elmo Makil, had already warned Jojo about life with his daughter, who happened to be somebody with a strong calling for the performing arts.

“He (her father) was also warning my husband’s family that I’m not a normal daughter-in-law,” she added.

Who indeed could suppress a creative soul who was raised in a family —a famed opera singer as dad, an educator mom with a twin who’s a writer and a “comprehensive artist” for a sister—of similar talents and pursuits?

Born in Dumaguete, Ignacio started to perform at age 4 and studied ballet with the Silliman University Junior Dance Troupe until she was 8.

When the family moved to Manila, she had the opportunity to study in UP Diliman with subsidized tuition because her father taught in the university. She randomly picked the Theater Arts course along with a few other choices that could guarantee her acceptance.

The decision served her well in the end.

She wound up in the class of director-playwright Anton Juan, who would become a longtime mentor and whose most valuable lesson was that there were no shortcuts in the acting profession.

Ignacio also trained with stage luminaries Tony Mabesa, who taught her all aspects of theater including production and stage management, and Ogie Juliano, whom she described as “the total theater practitioner.”

But it was Juan who urged the actress to embrace her unique looks.

As a young girl Ignacio had already been very aware of her strong—some would say mataray—facial features. She said it threw her off her game in the beginning, because she would never get cast as a young girl—not even the friend of a young girl.

The actress quickly learned to accept how her strong features were being pegged and, at age 19, was already taking on mother and aunt roles.

“For a time I was like ‘lahat sila nagbabatabataan, samantalang ako matanda,’” she said.

“Then I realized older roles are much more interesting. They’re meatier. They have the depth and greater trajectory an actor can play with.

“I have this concept that I’m never going to get cast in Cinemalaya [films]. I don’t look completely ‘indio’ or completely Pinoy. I’ve been told I look mestiza pero hindi naman … hindi ka mukhang yayagitin, they say.”

And so Ignacio delved into characters that conformed with her physical features, such as Medea, a role she considered a blessing (she was 27) because it was not only coveted by many actresses, but also directed by her longtime mentor and staged at the now defunct Philamlife Theater.

“I can see snippets of her (De la Rama) that I want to become … her sacrifice for family [because] she gave up a lot when she decided to take a backseat for her husband, though she was already a superstar,” shared Ignacio.

She especially admired the nonchalant attitude the stalwart performer had about industry awards.

“I’ve nothing against awards, that’s a good pat on the back,” Ignacio explained. “But to do theater to be recognized or to get an award, I think you lose track. The main goal is to tell the story, to tell it good, honestly and clearly. Awards are just perks.”

Next month audiences will see Ignacio in “Rite of Passage,” a coming-of-age drama written by Glenn Sevilla Mas and directed by Ron Capinding, to be staged in Ateneo. The play, which runs Nov. 27-Dec. 13, also features Ronnie Lazaro and Teroy de Guzman.

Her character, Manding Susing, will be another auntie role, but knowing Ignacio’s approach to her craft, expect her to deliver what the part demands.

“What I am in theater or the work I do, I’m the same at home. I don’t necessarily change from one [type of] person to another,” said Ignacio.

“They say I’m a diva backstage but I’m really not. If you listen to what I ‘bitch’ about, they’re actually all valid and the reason I say them is because I know the job. I know every little or big job in theater. I was trained to be disciplined that way.”