The ‘halimaw’ Bituin, who belts and roars for a living | Lifestyle.INQ ❮ ❯ 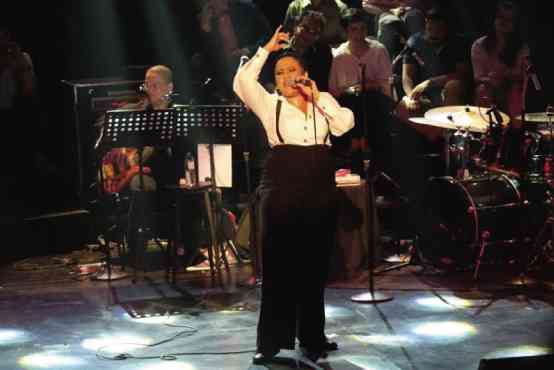 ESCALANTE proved that with amicrophone in hand, she could fashionmusical miracles out of the unconventional.

The ‘halimaw’ Bituin, who belts and roars for a living

If the Aliw Awards were still interested in upping its credibility —or if it wants to show that it does pay attention at all—then the race for the Best Female Concert Performer trophy should be over by now. The winner is Bituin Escalante, whose voice basically nuked the CCP Little Theater to the ground during her solo concert, “Everything in Bituin,” last Oct. 9.

That’s hyperbole, but what language is more apt for that celestial instrument inhabiting the woman’s throat, which evades any English adjective and can be justified descriptively only by the Tagalog word “halimaw”? (“Monster” just doesn’t cut it.)

But “halimaw” is also very much Escalante herself, who proved that with a microphone in hand, she could fashion musical miracles out of the unconventional—by making “crazy” the new normal.

For instance, who besides her can open a “Jesus Christ Superstar” medley with a chorus of “I Don’t Know How to Love Him,” only to upend the laws of the universe and make the musical theater worshipers in the house shoot up from their seats, and everybody’s ears achieve a kind of auditory orgasm by segueing into an earthshaking, sea-parting rendition of “Heaven on Their Minds”? (That’s the big solo of the Judas Iscariot character—yes, a man’s song.)

Or how about a scorching rendition of Cole Porter’s “Find Me a Primitive Man” (in a medley that also included “So in Love,” “Night and Day” and “Begin the Beguine”), the lyrics oozing from Escalante’s mouth with a kind of primal yearning for flesh, as befits lyrics that go, “I could be the personal slave/of someone just out of a cave/The only man who’ll ever win me/has gotta wake up the gypsy in me”?

Or, widening the selection further beyond showtunes and jazz standards, who in in this country can pull off an explosive “Proud Mary” so effortlessly, as if her body were a reservoir of big notes all waiting to be spewed out the way a dragon breathes fire?

It’s reasonable to crown Escalante the Filipino queen of vocal acrobatics. Even outwardly simple melodies like Randy Crawford’s “One Day I’ll Fly Away” were reshaped and pared down to prayerful form, a hymn to the hits and misses of love, as Escalante emitted runs and riffs midway that sounded almost animalistic, like the strange cries of a wounded beast.

But this is also a woman who can poke fun at her plus-sized figure and come off even sexier. (For isn’t humor an aphrodisiac?)

Thanking her costume designer, she said, “Eric Pineda, you always get the curve of my ass when you make my pants.” And to her partner, she allowed us the slightest glimpse of their romance: “To the tatay of my daughters—no words. Kita na lang tayo sa dilim.”

A third into the concert, it became apparent that this unfettered craziness runs in the family. A rousing duet of “Minsan ang Minahal ay Ako” from the musical “Katy!” with her sister Kalila Aguilos devolved into a hilarious back-and-forth as the siblings ribbed each other on their personal idiosyncrasies.

Given its candid, freewheeling nature, it didn’t feel like “Everything in Bituin” actually received methodical, no-nonsense direction—and that could only be the shared success of Escalante and director Audie Gemora.

There was even a segment where members of the audience went up the stage and sat on the once-empty risers that constituted the “set design.” In that moment, the concert assumed an entertaining, double identity: an intimate, in-the-round cabaret, and an arena in ancient Rome, with Escalante as the lion and the people in those seats laid out for her like a buffet.

Nothing remotely cannibalistic occurred, of course. She belted and roared for close to two hours, the music provided by the three-piece band known as the Habemus Papas, composed of Joey Quirino (keyboards), Meong Pacana (bass) and the wildly talented Jorge San Jose, who summoned the drums to rumbling life.

Now how about a gender-bending production of “Jesus Christ Superstar,” with Escalante as Judas? It should take serious balls for any theater company to rise to that challenge; this woman already has ‘em.