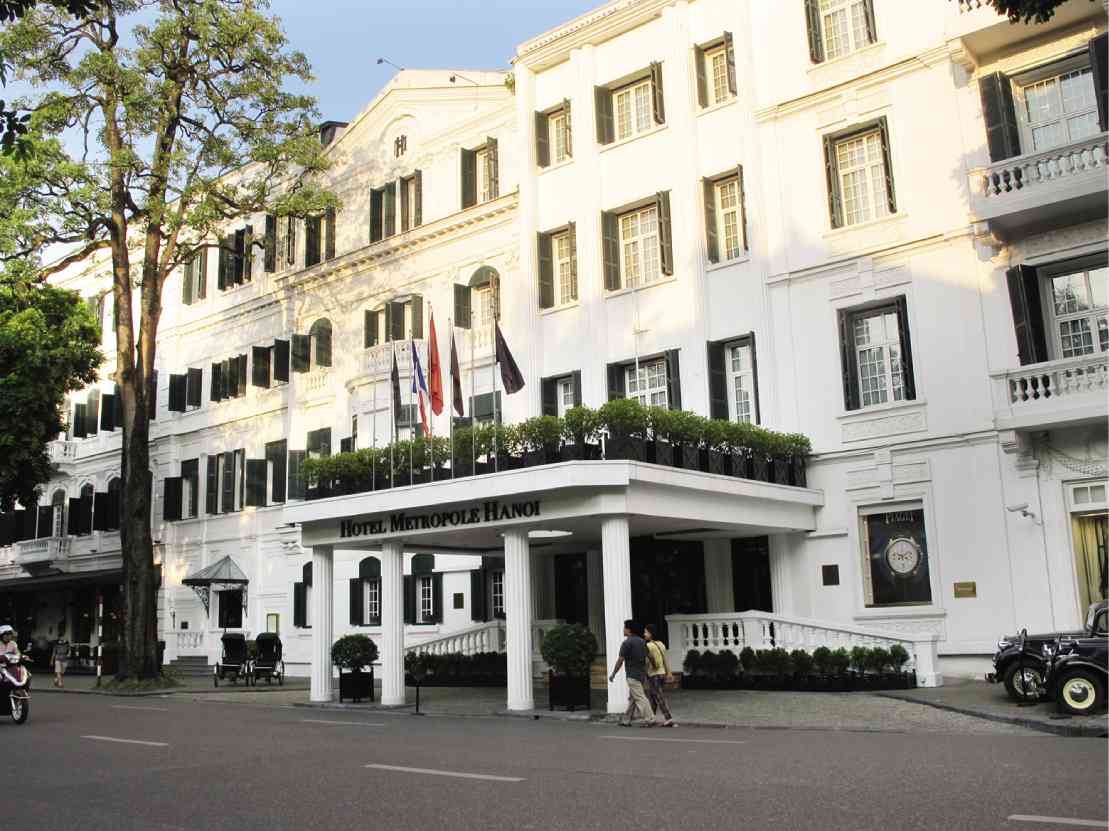 Hanoi’s Metropole–nothing less than Paris itself

In the waning years of the 19th century, the great powers of Europe were in the thick of their empire-building spree. The competition was often unruly.

Yet, when the dust cleared, it was evident that the victor was Britain. She controlled the largest swathes of land on earth.

In the race for territorial acquisition, second place was France. If her holdings were a tad less extensive than that of her main competitor, France’s portfolio of assets was remarkably quite similar. For if India was the jewel of the British crown, France had her own bauble for her diadem. This was no other than Indochina.

Indochina was cobbled together in 1887. It would consist of Cambodia and the three sections that eventually formed modern Vietnam: Tonkin in the north, central Annam and Cochinchina in the south.

According to scholar Nicola Cooper, the French originally referred to their prized possession as Indo-chine, with a hyphen in the middle, indicating that the territory was a tentative space caught between two grand civilizations. It was an invented, hybrid land that was vulnerable to being undone.

Later on, Indo-chine would evolve into Indochine française. Cooper suggests that the hyphen’s subsequent disappearance meant that the French had become more confident about their colonial creation. They imagined that the different parts had coalesced into an integrated new territory under the unifying benevolence of France.

Expectedly, in the early years, the colonizer’s main goal was to assert authority. This could be accomplished by military force. It could also be achieved more subtly—by convincing the local populace of the superiority and desirability of French culture.

This second, more covert approach did not require a fortress but a glistening showcase of Gallic civilization.

Surely it was more than coincidence that in 1901, the Grand Metropole Hotel would open its doors. It was to house the many visitors to Hanoi, a center of French colonial operations in Asia. From all over they came: generals, bureaucrats, merchants—sometimes with their families in tow.

Still, as its name suggests, the Metropole could also fulfill another, perhaps more important function. For “metropole” means mother country or, more specifically, the headquarters of empire.

So, this edifice way out in Vietnam was not meant to be simply a dormitory; it was ordained to be a window into the splendid heart of the Francophone world—nothing less than Paris itself.

A glance at old photos of the Metropole will bear this out. One sees a regal building with elegant windows, and a central section with a curved mansard roof that would not be out of place in the City of Light.

The many glittering events that must have been staged here complete with table settings, elaborate dishes, cheeses and wines must have introduced the Vietnamese to the ways of their European interlopers.

The Metropole became the acknowledged acme for all who traveled these parts. But the Second World War would see it lose some of its luster. It became even more rundown in the years following the end of Vietnam’s bloody war with the Americans, necessitating a major refurbishing in the 1990s.

Surveying the Metropole many decades after its opening, I could no longer see the dome pictured in vintage shots. I was told that half of it was still there, behind the facade. Yet, no matter how I strained my eyes, I could not find it.

Despite the missing roof, the link with the Mistress of the Seine was quite palpable. I could sense it in the hotel’s surroundings—the Beaux Arts buildings, the tree-lined boulevards.

Then there was the Metropole’s outdoor café overlooking a park where the local residents would dance every night.

Exploring its Opera Wing that was added in the 1990s renovation, I felt the vibrations of the French capital even more. The gleaming white surfaces, the striped walls, the jewel-like tones of the asymmetrically patterned carpet in the corridors conveyed a parisienne joie de vivre.

In contrast, the Historical Wing, the section that dated to 1901, was hushed and low key. It was filled with ethereal images that a Japanese documentary pointed out so eloquently: light falling on a carpet; the amber glow of a brass rail above the wooden dado; the blur of the slowly revolving fans.

They were eloquent reminders of an edifice that had endured many dramatic decades and survived.

An article by Maurizio Peleggi on Asian heritage hotels asserts that such features are specially staged to give guests a mirage of authenticity.

In fact, the later managers had very little documentation of what the Metropole was like in the past.

Illusion as it may all be, the experience was enjoyable. I loved that my laundry arrived in a woven basket and that, during lunch in the solarium, the waiter transferred the remaining liquid in my soft drink can to a carafe.

I smiled while walking down the passageway at the parade of lamps with conical hats for shades. Careful attention to details like these is truly the hallmark of an illustrious institution.

As a friend commented, “Wherever you turn, every corner is a picture.”

Then again, I did admittedly feel a little silly when I accepted the invitation to ride the hotel’s exquisitely restored circa 1940s Citroen Traction. After all, my journey would just be around the block.

The commuters I passed must have snickered at the bizarre foreigner riding a dinosaur. But somehow I became a child again, being appeased with an abbreviated trip. I began to appreciate the wooden detailing, the backseat as ample as a couch, the generous leg room.

By the time I glimpsed Hanoi’s famous Theatre through the oblong rear window, I was definitely entranced. I returned to my room, beaming all the way.

On my last full day I decided to take the Metropole’s in-house tour because I would get to see the bomb shelter. But I was unsure what to expect. Would it be glamorized?

The tour guide began by showing artifacts in a cabinet and a series of exhibit panels on the wall. I noted that the Philippines’ Gemma Cruz was quoted in a caption.

The guide went on to describe the one-person air raid shelters. He explained that they were too flimsy to provide real protection from the bombs the Americans dropped.

Their real purpose was to provide a sense of security, no matter how illusory.

Finally it was recounted that during the hotel’s restoration, workers stumbled on the roof of a bunker. Veteran employees confirmed that this was an old bomb shelter for guests to use during air raids.

Someone asked why no one had said anything when they had certainly known the underground chamber was there. The guide answered that the reason was not because it had been forgotten, but rather people did not want to remember.

Descending into the shelter, I would soon learn why it deserved to be erased from memory. The air was so heavy and hot, the cement walls so stifling that I had to stop myself from fleeing.

Imagine several people crammed into the tiny space, unsure if the structure would hold.

Water dripped from a hole, leaving green stains. It was almost as if the bunker was still bleeding.

The guide recounted that folk music icon Joan Baez had sought refuge here as a hotel guest during the Christmas 1972 bombing of Hanoi. Then he played a recording of a song Joan had composed, with these lyrics:

To smile at me and quietly let me share your agony

And I can only bow in utter humbleness and ask

Forgiveness and forgiveness for the things we’ve brought to pass…”

I understood what the Metropole itself was letting us know—that behind the smiles and beneath the conical hats, Vietnam was a country that had suffered very much from its long war against the Americans. Everyone and everything had been wounded, even the hotel.

This was no longer illusion. This was history.