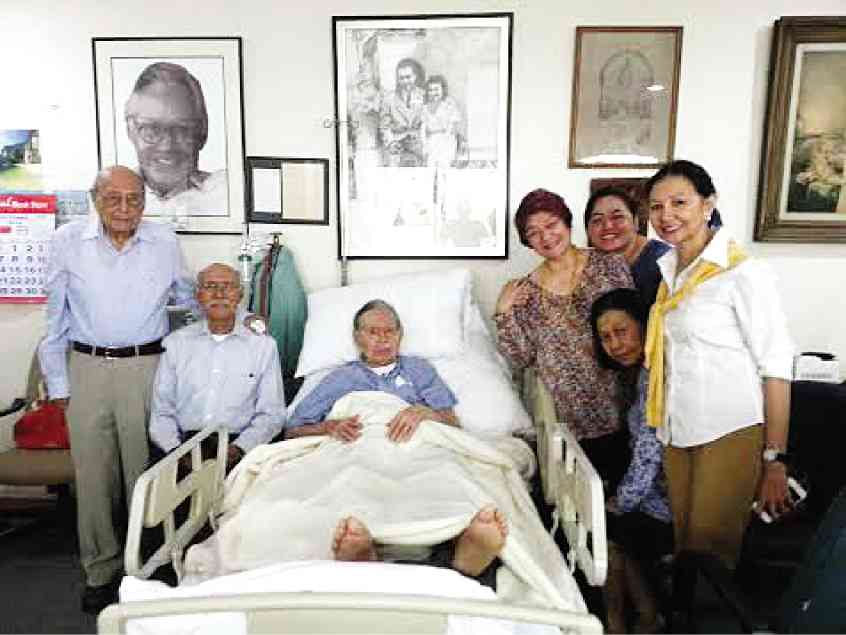 Music and memories to make the heart young again

As soon as I’m relieved of the two gift boxes of ensemadas by the maid, I find my way into younger cousin Tina’s air-conditioned living room. It was like stepping into a nursery where twin toddlers, exhausted from play perhaps, have dropped into a morning nap.

Asleep on the sofa are in fact two Roces uncles, the elder of four remaining. Tina’s dad Pipo, 92, came home for Peping’s 94th birthday from the United States, his home for the past 30 years. It’s amazing how even more alike they look now. I snuggle beside one, only because there isn’t enough space between them, and lie there half-hanging by the edge of the sofa.

This is the scene that greets Ninit, who has just deposited her Pollo Iberico in the kitchen for our lunch later, after visiting Peping and Pipo’s first cousin Marcos, himself 96, in the next village. Tina herself drives us the short distance.

Marcos prefers short and small-group visits, according to his granddaughter Genevieve. I didn’t know if a group of five was small enough, but, seeing his two cousins and his favorite nieces, as he endearingly likes to refer to us, truly makes his day.

Three old men reminisce about family and the war—they all fought in it. And whenever mention is made of our paternal grandfather Rafael, we are all especially moved. Marcos’ dad (a namesake) and Rafael were the youngest brothers and particularly close. When Marcos died in his early 40s, Rafael became the father to his junior, orphaned now since his widowed mother and two sisters had gone away to live in Europe.

Marcos talks animatedly about the Cine Ideal and points to memorabilia in the room. Peping now and then joins the conversation, his voice floating above the rest—he has forgotten his hearing aid. Pipo asks questions, as if looking to validate his memory, for which there’s no need: He’s amazing—for anyone of any age.

Pipo remembers how his father, our grandfather Rafael, welcomed Marcos home from serving in Europe during the war. Marcos recalls never expecting a room so big and well-appointed and being deeply touched by so generous a welcome. It is then that I learn it was the same room my parents had occupied with me until we went on our own. Pipo’s memory confirms it.

Marcos does most of the talking, and inevitably asks his nurse to put on his CDs. In that well-ventilated and naturally lit room, surrounded by tokens of family love, I feel privileged to observe each of my dearest uncles transported into the past by old songs, whose lyrics have never really left them. The old songs work their own magic, igniting more memories of the heart—“all the girls they loved before.”

Naughty Ninit seizes the opportunity: “Tito Marcos, do you remember the name of your first girlfriend?”

He summons the nurse for an album; and there were her pictures—anyway, the ones that have survived his wife’s scissors.

“Dorothy,” he introduces her with a wink.

She’s blond and movie-star gorgeous, a cross between Piper Laurie and Lana Turner. But there were morenas, too, in the album. Pipo attributes his popularity with women, aside from being handsome and debonair, to his dancing skills. He must have learned the right moves in Argentina (his sister married an Argentine ambassador) and Cuba.

“Well, the girls liked to dance with me,” he confirms.

Ninit isn’t through yet; she turns to Pipo, “How about you?” After a momentary pause, he asks, “Serious or not serious?” And we all laugh.

Peping escapes in his deafness, but Pipo volunteers, “Peping liked them fair.”

“All you brothers knew each other’s secrets, right?” I say, and find my answer in the twinkle in Pipo’s eyes.

“You know when Tuting got into trouble with a girl, Mama and Papa sent him to America. Counting on the same good fortune, Peping and I got ourselves in a similar situation, but, instead of America, I ended up in Bukidnon and Peping in Palawan!”

Marcos sings more songs, and we try filling in some lyrics when they escape him. The Spanish song “Usted” seems a favorite.

Genevieve takes us to the dining room for some snacks before we go back to the lunch waiting at Tina’s. We cousins promise to come again as often as we can make it.

At Tina’s, a special surprise awaits her dad. As soon as the front door opens, piano music plays, but they fall on deaf ears and hungry old stomachs.

Pipo complains, for the moment so lost he thinks he’s in yet another house, “This is the third house we’ve visited, yet I haven’t been served lunch!”

Only when he comes face to face with the pianist does he realize it’s Herminio, the pianist in his own restaurant-bar Omar Khayam, in the ’50s! They hug. While we eat he plays, on and on, songs I never knew.

On “Two Blue Orchids,” Pipo sings along, obviously relishing special memories the song recalls. After lunch, Peping sneaks in a shuteye, right at table, and wakes up to signal Tina it’s time for him to nebulize. He’s back in 15 minutes.

Regenerated, he confesses that his theme songs with Tita Carmen were mostly protest songs—playful-protest songs, he likes to think—like “Noche de Ronda,” the Spanish equivalent of a boys’ night out, which ends with “…que se acaba por llorar,” a wife left in tears. But chuckling, he quickly adds, the other is “Bakya mo Neneng,” “which I’m grateful she never used on me, even when I sometimes deserved it.”

The pianist plays more, and Pipo remembers more, like “the American dame who’d get up and sing ‘All of Me’ when she was drunk enough to mean it.” At one point, he suddenly grabs Tina for a quick whirl in a little dance.

The next moment, as Herminio plays “Always,” he’s teary-eyed: “That’s the theme song of (oldest brother) Liling and Noring (his wife).”

Whereupon Ninit adds something I knew before: “It was my Mom and Dad’s song, too.” Now it’s my turn to get teary-eyed, and I get Tina and Ninit going as well.

Out comes the image of Ninit’s mom Alice, our very own lovable Auntie Mame, whose love for life was infectious. How hard it is to forget someone like her, Revlon Red nails and all.

My husband arrives to pick me up for a book launch. But even he finds it hard to leave, unable to resist stories himself, especially from natural storytellers who have kept their memories and lived this long to tell from them.

Indeed, the remembering and the telling and the music make their hearts—the incurable romantics that they are—young again.