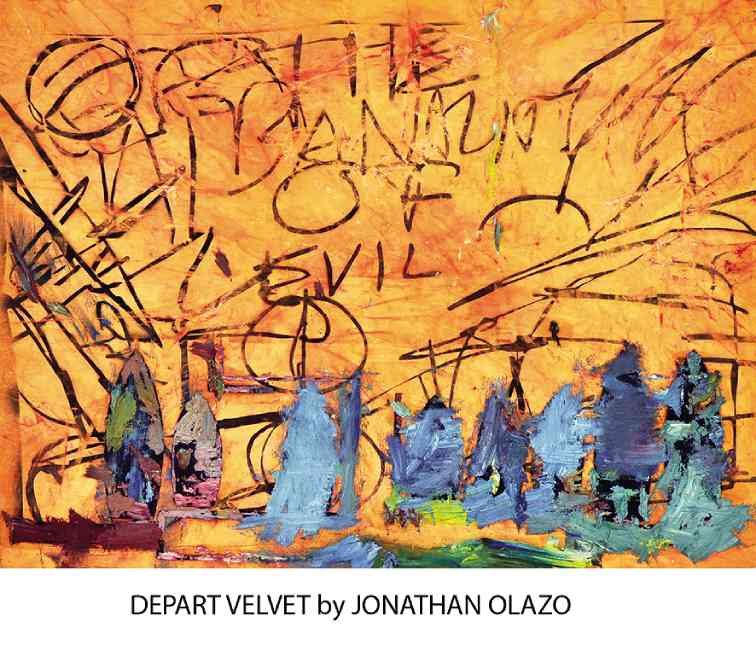 His was an act of courage, bristling with anger and sarcasm. It was the voice of outrage, at last giving vent to a long-observed phenomenon, and in his refusal to acknowledge the death of the art that he loved most, he took up the cudgels for other artists who, while longing to get those juicy commissions, resent the subservience demanded of space, scale and chromatic specifications, working under instructions handed down by architect, engineer and interior designer.

It was this sad state of artistic affairs that raised the hackles of artist Jonathan Olazo who lamented what he perceived to be the bastardization of art, notably abstraction.

Last year, Olazo held a solo show with an inflammatory title that stunned the art scene, “The Hotel Painter.” The accompanying press statement reads: “‘The Hotel Painter’ seeks to reclaim abstraction’s dignity in a society that has relegated it to mere decoration. Playfully taking the hotel environment as a starting point for this type of dismissal, Olazo attempts to look at it from another angle where the hotel instead becomes a temporary refuge for a reflection on painting.”

In Olazo’s current show at the Now Gallery and Auctions, there is indeed his sustained reflection on painting. A vehemently tenacious abstractionist (as is his father Romulo), the progeny has made mincemeat of the fearsome warning: Nothing grows under the shadow of a great oak tree. Casting a long shadow, Olazopere of course has created his own classic series, the “Diaphanous,” with those layers of light emerging from sharply defined and delineated forms, predetermined to abjure accident and indecision.

As though the father’s road had completely been taken, young Jonathan steered a different course: abstraction that courted and savored formlessness, an adventurousness in the choice of materials, a transformation of surface and ground, soliciting implications beyond being a vessel and receptacle for pigments and other unexpected ingredients such as tar, asphalt, candle wax and other indeterminate substances, and, of course, the confounding and irreverent titles that he bestows on the works that appropriate meanings unto themselves and tantalize the viewer.

Olazo’s current show at the Now Gallery is no exception. Billed as “Paintings on the Wall, Paintings on the Floor,” the show immediately instigates an investigation into the proper and accepted background for an artwork. While the wall may be the expected location for a painting, the floor—suggesting, as it does, ground, dirt, an object underfoot—may seem like a violation of traditional norm. And yet the so-called “paintings on the floor” are in fact what we traditionally regard as sculptures, the works being three-dimensional. Or has the field of sculpture, traditionally overlooked and ignored, at least in this country, been glorified as such by its new christening or perception as paintings?

A look at the floor works: Collectively they bear the title “The Flaneur in Magagoth Manila.” Olazo’s “Flaneur,” from the French word flaneur, meaning “stroller” or “saunterer,” thus roams aimlessly in the streets of Manila. But the works, just to anchor us to reality, are planks of wood, lathed to a smooth finish, and metal with its cold, gleaming surface, laid on the floor. They revel in their own symmetry or surprising asymmetry, and seem grateful that their creator Olazo did not see it fit to tamper with their nature as material, with artifice the farthest thing in his mind. A passage from an interview with the French conceptual artist and sculptor Bernar Venet crystallizes precisely what drives Olazo:

“I tend to prefer simple, direct works, and seminal statements that have unsettled our concept of history. In contemporary sculpture, I mostly appreciate works that are sober, continue to mark decisive stages and enrich theoretical thinking. Works that do not merely appeal to the intellect but engage the sensorial with equal force. The ideal sculpture is one whose characteristics I would like to compare to a painting by Mondrian. There, the radicalness of its concept and the thought it engenders are the perfect match for the works’ pictorial quality.”

Regard, then, Olazo’s “Flaneur,” as visions of Mondrian recumbent, supinely at rest and in resplendence on the floor.

The “paintings on the wall,” on the other hand, are the complete contrast, as they pursue Olazo’s defiance of the loathed “well-composed” painting. Like drama’s “well-made” play with its beginning, middle and end, Olazo’s paintings are a visual relish of chance and accident, in the manipulation of space and pigment, unmitigated by a refusal to cater to any sense of aesthetic elegance. It is disingenuous, however, to consider the seemingly accidental splatters and willful piling of thickly encrusted pigments as though they accrued by themselves and were not imposed by the artist. (Rauschenberg, to reject the Abstract Expressionists’ claim that accidents are a one-time act on canvas, in time and space, created the Ab-Ex paintings “Factum,” repeating the splatters that are—well, more or less—a mirror image of each other.) In his now trademark smears and scrawls and strokes applied in layer after layer, Olazo is attuned in perfect pitch to the rhythmic gyrations of indefinable form and shapes. Do these accidents have a mind of their own? Perish the thought. It is Jonathan Olazo, the artist, who ultimately cracks the whip.

And, yes, starting with those hotel paintings.