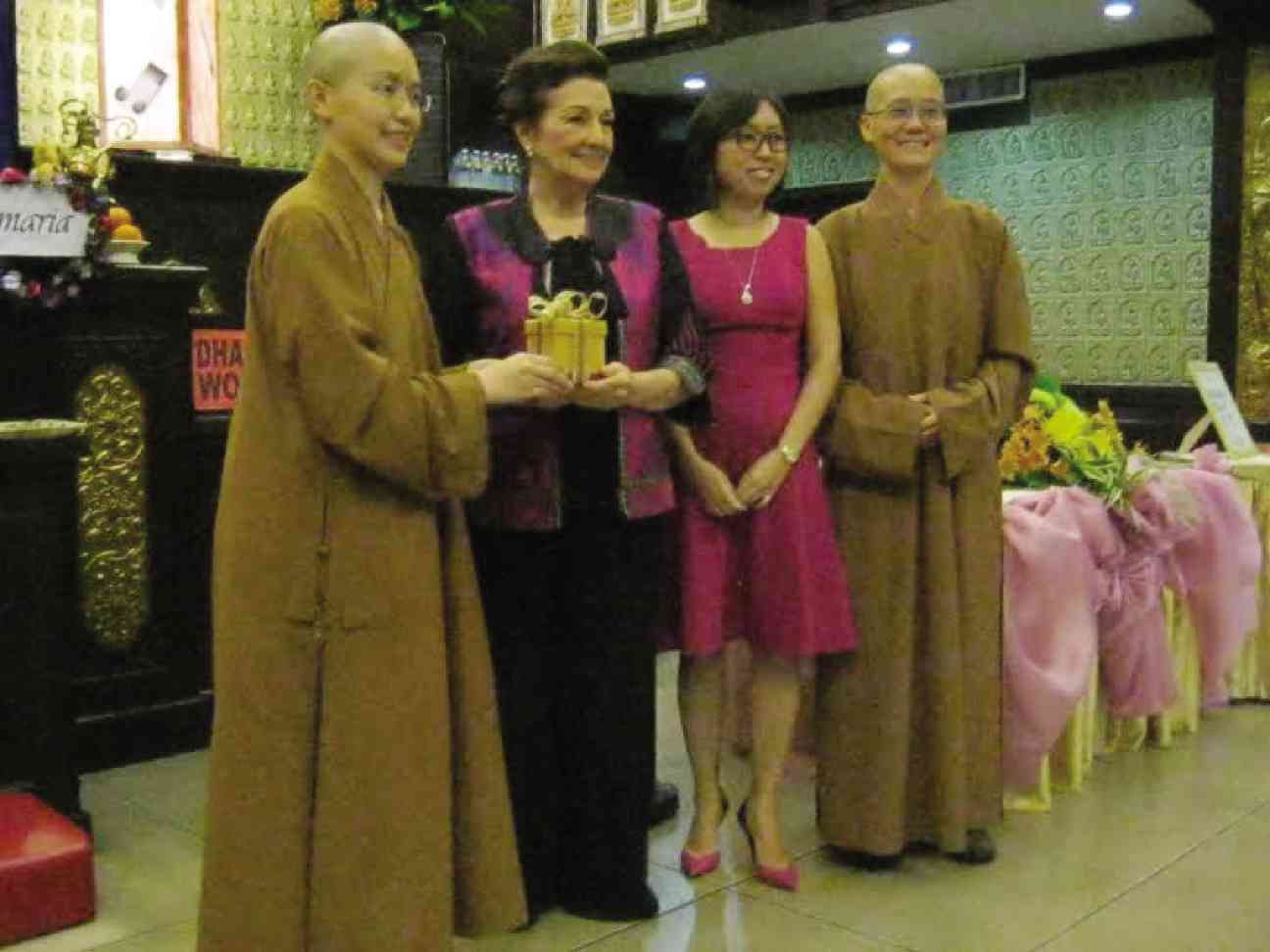 SANTAMARIA at the Yuan Thong Temple in Bacolod City

For more than a decade, pianist Ingrid Sala Santamaria has been holding classical concerts in the Philippine countryside in varied settings (not to mention playing and making do with inferior pianos).

Now she’s holding a lecture series on classical music. She talks about her travels from Cebu to Manila and on to Juilliard, and working with such legends as Dame Margot Fonteyn and Rudolf Nureyev in special performances.

For her maiden lecture, Santamaria chose the Yuan Thong Temple in Bacolod, where she got a chance to witness an authentic Buddhist worship ceremony.

Speaking to an audience of mostly students and music-lovers of Bacolod led by Msgr. Guillermo Gaston, the pianist traced her musical life studying music at her mother’s Battig School in Cebu and on to her concertizing in Manila and abroad.

But the most substantial part of her lecture was how she was able to reach out to provincial audiences; how she enjoyed her Concert at the Park engagements; and how she interrupted her piano concertizing for 10 years to attend to the needs of the first youth orchestra in Cebu.

She relived those concerts with actual video beautifully put together by David Brass. The lecture-demo ended with her doing a rousing performance of Tchaikovsky No. 1 with the Philippine Phiharmonic Orchestra under Eugene Castillo.

When she was barely in her teens, she said she remembered writing on a slum book the profound task of serving humanity under the heading “Ambition.” At that young age, she wondered how she could do that.

She told her audience: “As I would eventually come to realize much later, I came to terms with the fact that life’s real meaning is serving humanity. We may not be able to change the world completely but we can help change ourselves in order to help the world. My way was and is through music. My mission has since then to make everyone aware of the importance of classical music.”

In the open forum, Santamaria admitted to her young audiences she had her share of frustrations in music, but she overcame them with a bigger vision, which was to transform, enrich and ennoble the Filipino’s way of life, heart and spirit through the understanding, appreciation and love of classical music.

Visibly thrilled by the lecture and the accompanying video of several concerts were the young female monks who came not only from Bacolod but also from Cebu and Iloilo.

Among the monks were those from Fo Guang Shan Philippines, Miao Jing and Yung Ling, as well as Chueh Lin from Mabuhay Temple in Manila.

Attending a Buddhist ceremony just before the lecture, Santamaria said felt positive vibes in the chanting of the monks that she likened to classical music.

Santamaria said that what she learned in open and non-traditonal venues such as Concert at the Park was that classical musicians needed to reach out to ordinary music lovers who otherwise had no access to expensive concert venues.

“Listening to classical music activates one’s neurons or brain cells and in the process makes us more intelligent, as research studies have shown,” she said. “You will be surprised to find out that classical music refines our emotions and enriches the human spirit.”

On the way to the Silay airport, Santamaria visited The Ruins in Talisay City and played Chopin’s Etude in E Major, Op. 10 No. 3 (popularly known as “No Other Love”) in an upright piano with some missing keys.

We discovered another concert venue perfect for sunset concerts.