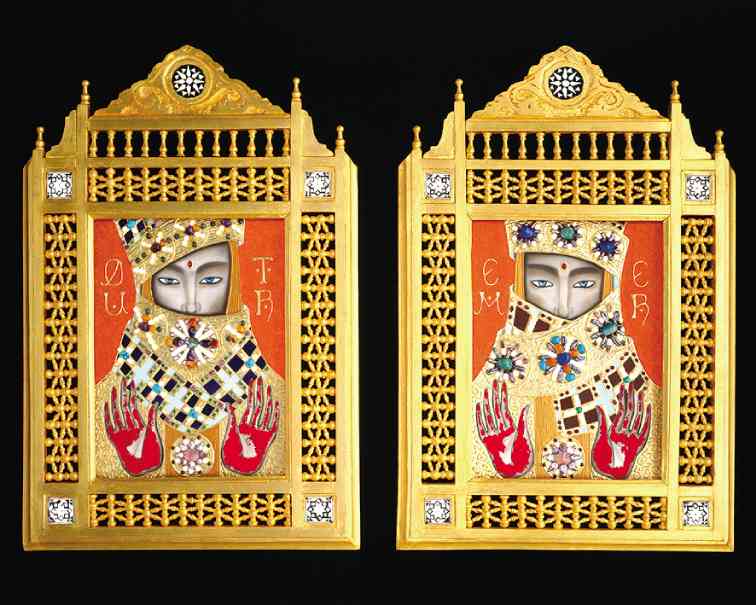 Four Filipinos explore the theme of “Diaspora” at the forthcoming Asian Art in London 2014, from Oct. 30 to Nov. 9. They are Andres Barrioquinto, Mark Lewis Higgins, Renato Orara and Mark Valenzuela.

The special exhibit of modern and contemporary Southeast Asian art is organized by Singapore-based One East Asia as part of the annual art event that involves several galleries, auction houses, as well as the British Museum.

“‘Diaspora’ is more than an abstract concept for every Filipino, it is part of their everyday reality, as well as their imaginings,” noted managing director Daniel Komala of One East Asia. “It is as familiar today as it was to José Rizal, who himself lived and worked abroad and was also an exile in his own country. Diaspora is not merely a physical or geographical condition, but also if not more so, a sense of being psychologically in two places instead of one, or in one place instead of another.”

Higgins seeks answers in a universe that blurs the lines between ancient maps, peoples and languages. Moving beyond Western conventions of painting, his works utilize rare art forms such as icons and scrolls, crossing cultures in technique and materials.

“For this reason,” said managing director Daniel Komala of One East Asia, “we see Mark Higgins’ works bridging the ancient world and the present of Asian art. It is ‘contemporary archaeology.’”

His works are transnational portraits of empresses, shamans, scholars, mysterious strangers all, glorious in their other-worldliness in precious silk, gemstones and gold leaf. The paintings layer answers to the ultimate question of belonging.

Higgins said the three works he will be exhibiting in the show feature “geographies, religions and histories, all overlapping and fusing together in unexpected combinations that provoke the viewer to think about origins and identities.”

In the painting “Sudan,” he explained, “figures are juxtaposed with other figures that seem to be from a different time period, like a pentimento. The subjects are then ‘displaced’ in an image, or they appear to be displaced because they look like no race or ethnic group we have seen.”

He added he used the technique “to insinuate how the layering of histories can tell a new story or sometimes an undiscovered one—much like the fact that history in real life is constantly revisited with new archaeological evidence that disputes things we thought were absolute truths about ourselves or the world.”

“The idea for this series,” he further explained, ‘was that the paintings looked like chunks of fresco that had been freshly excavated—hence some of them still being wrapped in linens or sackcloth.”

“Outremer,” a second work, takes its name from what the ancient Romans called Jerusalem, “beyond the outer sea.”

It is a stunning diptych of a pair of beguiling foreigners, made of gouache, chalk, acrylic and 23.5-K gold-leaf on board, studded with keshi pearls, agate, Indian garnets, amethysts, malachite and turquoise.

The frame is inlaid with mother-of-pearl and likewise covered in precious gold leaf.

“Bilqis” is believed by some to be the lost name for the Queen of Sheba. It is an image of her, anointed by King Solomon, in a shimmering headdress covered with freshwater and keshi pearls, jade, agate and lapis lazuli from Afghanistan.

Like the other portraits, she is a citizen “straddling cultures from everywhere and nowhere,” as one art critic has put it, from homelands, forgotten or all too-present.

Higgins’ works reference worlds from Byzantium to Bactria, Egypt to China, India to Japan, standing preconceptions about race and history on its head.

Barrioquinto’s paintings contrast Western techniques with Oriental themes; while Orara plumbs the mysteries of secret discoveries among the mundane. Valenzuela likewise tackles the issues of conflict and displacement.

Mark Lewis Higgins himself is a member of this fascinating phenomenon of diaspora, creating in both Rome and New York works that have exhibited in the United States and Hong Kong. His “Diaspora” series was premiered in its entirety at the Ayala Museum’s main exhibition space in 2007, his only one-man show in his home country.

During the opening night reception on Nov. 4 in London, the artist will also be featured in a special Gallery Talk entitled “Diaspora and Displacement: Vivienne Lawes in conversation with artist Mark Lewis Higgins”. (Lawes is an art consultant of the gallery.)

A second discussion, this time on Southeast Asian art, has also been scheduled on Nov. 6.

The other Filipino artists are as familiar abroad as in the Philippines: Barrioquinto regularly exhibits in both Manila and Singapore, and his works are in the Singapore Art Museum; the works of New York-based Orara are part of the collection of the Museum of Modern Art (Moma); and Valenzuela is into conceptual art. ceramic installation and painting; he is based in Australia.

Also being showcased are the works of Singaporean Jane Lee and Thai Anchalee Arayapongpanit.

Asian Art in London is an annual event, now on its 17th year, that unites leading Asian fine art and antiquities dealers, galleries and major auction houses in one exciting series of exhibits, lectures and auctions. These are complemented by film screenings, musical performances, as well as thematic exhibits at various museums.