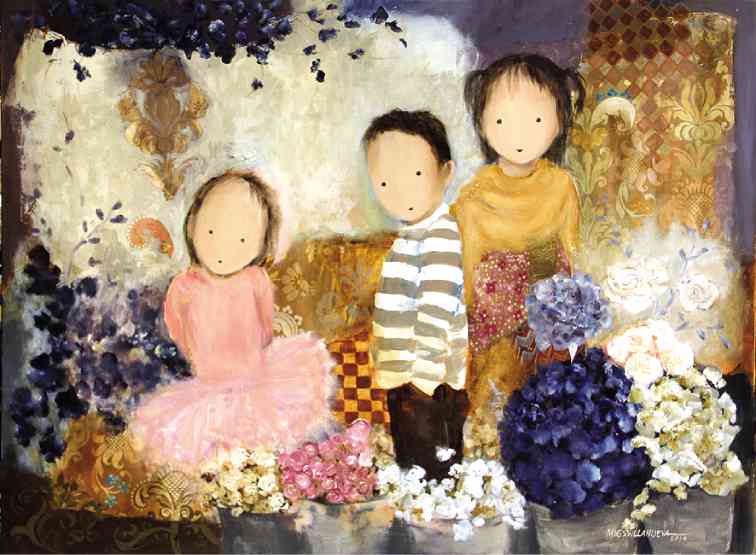 The artwork on the cover of “Fairground: A Literary Feast,” the festschrift and anthology of poems, prose/essays, monologues and short stories by 40 of the best poets and writers in the country in honor of Mario I. Miclat, retired professor and dean of Asian Center in the University of the Philippines Diliman and an award-winning fictionist and essayist, was by artist-writer Migs Villanueva.

Impressive as the contents are, the book has been catching attention also because of the whimsical cover showing two kids at play. It’s a vivid depiction of Fairground, which, according to Astro Swami, may represent the need to relax and become more childlike.

The cover art, “Afternoon in the Garden,” is a naïf painting by Villanueva, who has distinguished herself in presenting childhood vignettes in her art.

She had a solo show on Oct. 15-19 at ManilArt, SMX Aura, Taguig City, titled “Sweet Cheeks and Velvet Apples,” a series of memories of her girlhood.

The artist said of her show: “The major works are deliberately ‘busy,’ to kind of imitate the behavior of memory (my own, at least): lots of sensory detail, and I don’t know how much of it is real; how much is imagined. But these visually busy pieces can be hard on the eyes if hung together in one place, so I have breakers. More quiet pieces where the eye (or the heart?) can rest.”

Before she found her niche in art, Villanueva was a writer, winning three Palanca awards and two NVM Gonzales awards for fiction. She has been drawing and sketching since childhood.

She took to painting in 1997, while mothering two sons and two daughters. Her first attempts at painting were of little girls. The waifs she painted were informed by her daughters and, she confessed, “by memories of my girlhood.” A monograph of those waifs in 84 full-color pages titled “Waif” was launched last year in Hong Kong.

Villanueva realized that painting was a different ballgame altogether. She did a lot of research, hooked up with exhibiting artists to tutor her, and attended a workshop of Fernando Sena. She sought Mauro “Malang” Santos, whose work she admired.

In 2000, she joined the Saturday Group of Artists.

Villanueva went into all sorts of subjects and themes to find her own voice in art, and experimented with abstraction.

“After many years, I went back to painting little girls—my first impulse was the right impulse, I guess,” she said.

Asked who affected her development as an artist the most, she singularly pointed to Malang as “my greatest influence.”

She also would never forget the impact on her by the life-like feeling of spontaneity and movement by the French painter Edgar Degas.

“I guess I have been a fan of Degas’s work since high school. I loved especially his unfinished sketches. There is something about imperfect, seemingly unfinished art that grabs my attention,” she said.

Other influences are modernists such as the Spanish painter, sculptor and art theorist Antoni Tapies; American Cy Twombly, famous for his “large-scale, freely scribbled, calligraphic and graffiti-like works on solid fields of mostly gray, tan or off-white colors;” and the American painter and graphic artist Robert Rauschenberg, “whose early works anticipated the pop art movement.”

Villanueva is now the president of Saturday Group which continues to hold its traditional annual show, where she exhibits even as she also has yearly shows in Malaysia, Hong Kong and Singapore through Galerie Francesca.

She has mostly been doing acrylic on canvas, but has also been mixing in collages, like strips of fabric and/or paper that she paints over.

Of late, she has been experimenting with clay on canvas.

“It’s very good, but really tedious. In fact, my next series will be reliefs using clay on canvas,” she said.

Early this year, she had the luxury of a few weeks without deadlines to meet, and used that time to work on (guess what?) some sculptures.

“I will devote more time on that later this year,” she said. “I want to make my waifs three-dimensional.”