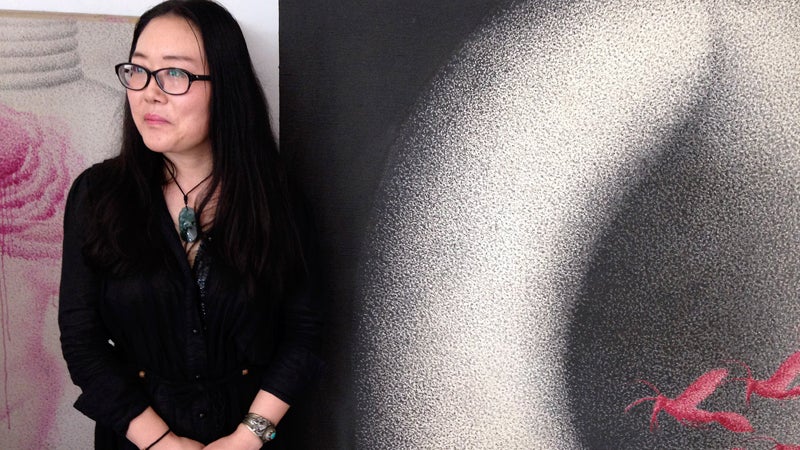 In this photo taken Sept. 20, 2014, Chinese artist Ma Ming stands in front of one of her abstract paintings showing what appear to be insects flying into giant orifices as a commentary on abducted children in China at her studio in Beijing, China. Artists in Songzhuang have long enjoyed rare creative freedoms by keeping their art and conversation mostly away from the public, but police arrested 13 people who work or live in the district in October after they posted online pictures and commentary support pro-democracy demonstrators in Hong Kong.(AP Photo/Jack Chang)

BEIJING — Just a few weeks ago, oil painters in eastern Beijing’s Songzhuang art district had welcomed foreign reporters into their studios and shown off works tackling such touchy subjects as China’s prisons and Communist Party politics. Over lunch, they candidly lamented the state of free speech in China while chewing on chicken and downing glasses of beer.

In a tightly controlled society where dissent is quickly squashed, the artists of Songzhuang appeared to be enjoying a rarely seen degree of creative and political freedom. But then, on Oct. 1, that illusion was shattered.

Police first detained poet Wang Zang after he posted on Twitter a picture and message supporting pro-democracy demonstrators in Hong Kong. The next day, police rounded up another seven people who were heading to a poetry reading advertised on social media as supporting Hong Kong protesters. A total of 13 people living or working in the art colony were ultimately detained on charges of “creating trouble,” according to Wang Zang’s wife, Wang Li.

This past weekend, the police buildup was everywhere, with uniformed officers patrolling the aisles of Songzhuang’s art shops and riding in golf carts through its sleepy winding streets. Artists who weeks earlier had opened wide their studio doors were apologetically warning away visitors, fearful that speaking too freely could get them into trouble.

Since Songzhuang was founded two decades ago, its artists have largely avoided official harassment by following a few tacit rules: If they produced provocative work, they showed it only to each other, and if they sold it, they did so privately. Most importantly, they kept a low profile.

Painter Tang Jianying, known as one of Songzhuang’s most outspoken artists, said his neighbors had crossed that line by taking their dissent to the Internet.

“Among friends, we can speak freely,” Tang said by phone hours after police had called to check in on him. “But if you’re in public, you have to watch what you do. If you’re on the Web and you speak too freely, they’ll get you.”

Although China’s constitution promises free speech rights, in reality, figuring out what you can say or write has always been a guessing game.

Authorities have in recent months tolerated grass-roots protests on environmental issues but at the same time, violently cracked down on Muslim Uighurs in China’s far west who have denounced the central government’s policies on minorities. Watchdog groups such as Amnesty International say free speech restrictions have only tightened during the nearly two-year-old government of President Xi Jinping with police detaining dozens of lawyers, journalists and activists and even closely monitoring non-political groups such as Christian churches and community libraries.

On Wednesday, Xi told the country’s most well-known directors, writers and artists gathered in Beijing that their art should be patriotic and reflect socialist values, according to the official Xinhua News Agency. That message was prominently displayed across state media and dominated that evening’s main newscast.

“Fine art works should be like sunshine from blue sky and breeze in spring that will inspire minds, warm hearts, cultivate taste and clean up undesirable work styles,” Xinhua quoted Xi as saying.

Zhou Shifeng, a defense lawyer whose firm represents several of the Songzhuang detainees, said the government has been eager to quiet any criticism during a particularly sensitive few weeks. Thousands of pro-democracy protesters remain in the streets of Hong Kong denouncing China’s plan to screen candidates for the semi-autonomous city’s top executive. Next week, the Communist Party’s top leaders will gather in Beijing for a much-watched plenum.

“It seems to me that current political factors are more relevant than the rule of law,” Zhou said.

Despite the tougher environment since Xi’s rise to power, Songzhuang’s artists seemed confident during the Sept. 20 visit by about a dozen foreign journalists that they could avoid government notice as long as they followed the district’s long-standing unspoken rules.

With a booming voice, Li Dapeng couldn’t wait to show off his series of oil paintings depicting Chinese families, leaders and aristocrats — all topped off with grotesque pig faces. One painting, which he kept a copy of on his iPad, even depicted what appeared to be top Communist Party cadres with pig snouts and pointy ears, gazing down from a balcony.

“This is a happy thing. It’s not necessarily a criticism,” Li said. “It’s a way to talk about things that you can’t talk about if you paint people. But it’s fun if you use pigs.”

He added, however, that he didn’t publish the more provocative work in art books and had sold his pig paintings only to a private purchaser.

Down the street from Li’s studio, several of artist Ma Ming’s paintings showed insects flying into giant white orifices that looked conspicuously like vaginas. She said it was a commentary on child abductions in China.

“It’s like a wound,” Ma said of her work. “The sex workers I’ve met were very sad because sex is supposed to be about life and joy, so this represents their feelings.”

The pressure for more open political speech has only been growing in China, as more of its citizens go online and engage with the rest of the world, said William Nee, a Hong Kong-based researcher with Amnesty International.

“On the one hand, combined with increasing censorship and increasing numbers of people being detained and arrested, it doesn’t look good for freedom of expression in China,” Nee said. “But on the other hand, in the broader picture, if you look online and see how people’s attitudes are changing despite all the censorship and how much of an appetite there is for real news and analysis, then I think there’s something new.”

Still, the price for Wang Zang’s political speech has been steep.

Neither his wife, Wang Li, nor Sui Muqing, the family’s attorney, have heard from him since his detention in Songzhuang more than two weeks ago, Sui said Friday. Wang Li added that all those detained in the district were still in police custody. Local police declined to comment on the cases.

“Despite all these troubles, I think my husband did the right thing,” Wang said. “Everything he did wasn’t for himself, it was for everyone else. I still support him.”